The Tilehurst End Is One

Share All sharing options for: The Tilehurst End Is One 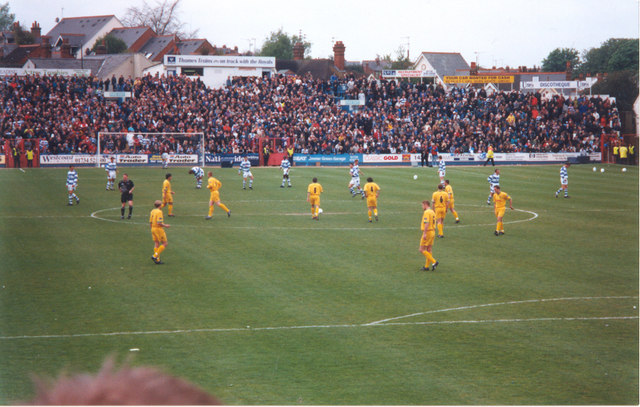 Other than sounding like some horrible spiritual mantra, the headline above means that we've passed the one year mark as a website. When we first launched a year ago I don't think any of us expected to have such a great reaction from Reading fans so thanks to everyone who has come over and read or submitted an article, plus those we've interviewed or have helped us out with opposition fans views.

Also thanks to other fantastic Reading sites, The Royals Rendezvous & HobNobAnyone? for the continued support, as well as the Royals Post Podcast and the people at Reading FC themselves who have always been happy to back us, cheers to all of you.

We're hoping for another great year and if you'd like to contribute we always welcome people on board, just send us an email to thetilehurstend@gmail.com

Meanwhile here are a few of our favorite articles from our first year.

Wimb looks back on the career of Chris Armstrong ahead of his emotional return to the Madejski ahead of the Sheffield United game.

How To Make a Small Fortune From Football - Part One, Two, Three - April 2011

Urzz1871 looks at how it's possible to actually make some money out of owning a football club, looking at how Sir John might well be able to come out of owning Reading with a profit.

A look at how the Academy has performed during it's first decade and the impact it's having on the club as a whole.

Great little piece from Magnetic about just how the playing surface at the stadium stays in such great shape.

What Went Wrong For Brendan Rodgers at Reading FC - June 2011

A look back at the ill-fated reign of current Swansea hero Brendan Rodgers and looks at just why he couldn't quite achieve the same success at Reading.

Tommy takes a light hearted look at some of Reading's high profile signings that didn't exactly pan out.

Wimb looks at the Academy graduate and ponders what the season may bring.

Urzz1871 looks at the new Elite Player Performance Plan and looks at the impact of the plan on Reading's Academy and the rest of the Football League.

The Best Defence In The League? - December 2011

Sam looks at our impressive defensive record and what it might bode for the future.

With Reading in the middle of a Takeover, Daniel Ward-Murphy gives his thoughts and counters some of the doubts risen.

Brian McDermott - To Wander To Wolves Or Remain A Royal? - February 2012

With Brian McDermott linked with the Wolves job, Wimb looks at the pros and cons of leaving the Madejski

That's just a very small sample of some of the fantastic articles that we've had submitted over the past 12 months. On top of that we've regularly brought you throughout the year.

Plus if you fancy looking at how we and fans of other Championship teams saw this year panning out, there's a full set of previews here.

Thanks again and here's to another year where we'll be hopefully describing Premier League Football!