As a fan, it’s not often that you come out of a game you’ve won with your main emotion being one of anger, subset by a peculiar combination of disbelief and relief. Especially a game that sees your team return to the top of the Championship table for the first time in nearly 6 years. But today’s match against Leeds saw exactly that reaction from most Reading fans, as two late goals from Adam Le Fondre became a mere subplot in the one-hundred-plus minutes the players spent on the pitch. The Royals kept the same starting XI which triumphed at Upton Park a week ago, but Hayden Mullins and Adam Le Fondre replaced the injured Jay Tabb and Benik Afobe on the bench.

(If you’d like to read about the actual football played in this match, skip about 2/3 of the way down the page.)

As always, Reading started with a bang. Just two minutes in the first chance came, as Ian Harte took a quick free-kick just inside the Leeds half and Noel Hunt rose to met the ball, which sailed over Andy Lonergan’s bar. Harte, who was given a rapturous reception by the Leeds support, then swung over a corner which Kaspars Gorkss managed to reach first, but again his effort was just too high. Leeds had yet to make a meaningful contribution to the game, but midfielder Michael Brown ensured that he would leave a mark on one of Reading’s players instead, as he scissor-tackled Mikele Leigertwood inside the Reading half, leaving the Antiguan midfielder needing treatment from the physio. Robust challenges were clearly the call of the day from Leeds manager Neil Warnock, but just three minutes later their decision to “get stuck in” was brought into question. McAnuff won the ball out wide and Zac Thompson flew rashly into a challenge with both feet off the ground. He may have made little contact but there’s something in the rulebook called “intent” – referee Darren Drysdale quite easily deemed this challenge worthy of a red card. It was a disgraceful tackle which looked even worse in replay.

"You think THAT was a red card? Wait 'til you see me nail Flames!"

With Leeds trying to kick the Royals off the park, it was up to the home side to actually try to play some football. And with eleven men against ten after just thirteen minutes, Reading were in the ascendancy. Jason Roberts was using his strength in trademark style, and he managed to turn Paul Robinson and swing a cross in. It was cleared only as far as Ian Harte, who tried the spectacular from nearly 30 yards but his shot flew harmlessly over. Twenty minutes gone and Harte swung in a deep cross which deceived Lonergan and cannoned back off the post to safety. The Royals were knocking on the door, but the goal was not coming. Instead, any sort of rhythm Reading were trying to build up was being eaten away by Leeds’ absolutely shocking behaviour on the pitch. Jem Karacan and Danny Pugh went in for a challenge, which Karacan won. Pugh, however, followed through with studs showing and caught Karacan’s ankle. Referee Drysdale deemed that Pugh had won the ball, despite it travelling back towards the Leeds defenders and Karacan limping off for treatment with bloodied ankle – an absolutely laughable decision from a referee who was only just starting to lose the plot.

Leeds clearly decided that they wanted to even the odds, and so Andy Lonergan went down like he had been shot when Noel Hunt jumped fairly with him for a high ball over the top. Luciano Becchio wasn’t to be outdone in the cry-baby play-acting stakes though, and a robust challenge saw him flail, writhe around in pain and wave imaginary cards around. A minute later though, he was up on his feet ready to swing elbows at the Reading centre-backs again. It truly is amazing how professional athletes have such low pain thresholds – or maybe they just enjoy the spotlight of the Sky cameras, capturing their expertly-honed dives in glorious HD. Fortunately the referee was wise to Leeds’ deplorable acting – but how he later didn’t spot a clear foul and red card was yet again beyond any Reading fan in the stadium (or indeed watching on television). Michael Brown, who had already been warned by Drysdale for persistent dangerous fouls including the early “sighter” on Leigertwood, went in hard on a Reading player. Jem Karacan was in the wars again and a serious injury forced the Turkish midfielder out of the game, Mikele Leigertwood helping him off the pitch as he couldn’t walk himself. Drysdale’s decision? A throw-in. Yet again, Michael Brown had recklessly, deliberately fouled a Reading player but the referee clearly wanted to keep the sides at 11 vs 11 – after all, he was running the Leeds midfield after Thompson’s early dismissal. Hal Robson-Kanu came on for Karacan, with McAnuff moving into the middle.

45 minutes were up, and all eyes were on the fourth official. There had been four stoppages for injuries to Reading players, three for Leeds players and with every throw-in Leeds were squeezing every last second out of Drysdale’s patience. And yet… three minutes additional time. THREE MINUTES. Yet another simply laughable decision from a referee who clearly wanted to get in and have a nice chit-chat with Colin at half-time, check out those reckless challenges again on the telly and try to justify to himself how he didn’t even give fouls, let alone bookings. Boos rang around the Stadium at half-time – not for the Reading players, half of whom were lucky to still be walking at 2.55pm, but instead for the absolutely shocking display from those in black. And as for the referee? Special words were saved for his exit.

Leeds started the second half, and so it was time to see what the referee and the managers had said at half time in an effort to turn this farce of a game into something resembling a FOOTBALL MATCH. That was until Becchio, ten seconds after kick-off, threw himself to the floor after Kaspars Gorkss fairly contested the ball with him in the air. The histrionics came out again – the pain! The suffering! The humanity! BOOK HIM REF! So this was the tone to be set for the second period. Snodgrass took the free-kick and forced Federici into a good save down low. (By the way, that’s the first time I’ve mentioned a shot on goal in 590 words). Leeds’ terrible behaviour continued still – first Pearce was clearly held by Becchio at a corner (“referee” Drysdale gave nothing) then Paul Robinson went through the back of Kebe close to the corner flag – the “ref” gave a yellow card. Rumours that Lord Lucan rode into the Mad Stad on Shergar’s back are as yet unconfirmed but if Drysdale deemed this challenge worthy of a booking then, what the hell, let’s say DB Cooper was spotted carrying a briefcase of dollar notes through the East Stand concourse too. 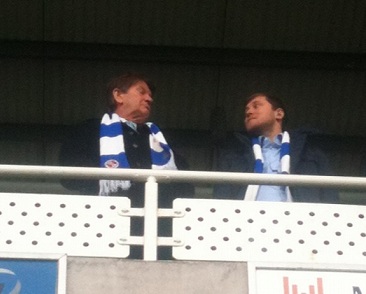 Anyway, back to the football – oh no wait, a few more non-footballing incidents to run through first. Becchio finally got his name in the book (and more importantly another close up on Sky Sports One, he’ll be hoping the missus recorded it so he can watch all his best bits) for a lunge on Jason Roberts, then Danny Pugh yet again flew in on McAnuff to see Drysdale jot down his name with excitement and wave the yellow card above his head. 57 minutes gone, and FINALLY I can call the rest of this piece a match report.

From the resulting free-kick, Ian Harte’s cross was met by Alex Pearce at the back post, but his header across goal landed safely on top of Lonergan’s net. It was Leeds, however, who fashioned the best chances of the second half. First Jimmy Kebe slipped whilst trying to dribble the ball out of danger – McCormack seized on this golden opportunity 20 yards out but his shot slammed against Federici’s post. Then Snodgrass was set free inside the Reading area, but Adam Federici preserved his clean sheet with a fantastic point-black reaction stop.

Reading began to pile on the pressure as the extra player began to tell. McDermott chanced his arm and threw on Adam Le Fondre in place of Noel Hunt. The last fifteen minutes saw a flurry of Reading chances as Leeds began to sit back and absorb the pressure. First Alex Pearce saw a header cleared off the line, then Leigertwood had a smack from 25 yards but his left-footed effort sailed over the bar. It was the introduction of Alfie which was to turn the frustration into smiles for Reading. McAnuff tried a long-shot from 20 yards which deflected off Alex Bruce and fell invitingly for Le Fondre to tap in from two yards. Finally, the breakthrough! Except the linesman had flagged for offside. A correct decision. I will say no more. Less than a minute later that was irrelevant though, as Kebe crossed deep for Robson-Kanu, Robson-Kanu beat Lonergan and Bromby to head across goal, and Le Fondre chested in from less than a yard to send the Royals into the lead. Jason Roberts wanted in on the act and Leeds were affording the Reading players more space than ever – he drove a shot from 25 yards which was always rising and Lonergan’s net was safe.

Until the last minute of the ninety. Leigertwood and Kebe’s neat play on the right wing released the former into the box, he squared for Roberts who turned and shot – Le Fondre, as all good poachers do, nipped in ahead of Lonergan to score his second and seal the game for Reading. Two-nil, and that’s all she wrote my friends. Every Reading fan was frustrated not to score until the 84th minute but then this is a side who couldn’t score a first-half goal for love nor money earlier in the season. It was a professional performance, not helped by some diabolically poor refereeing and some absolutely disgraceful play from Warnock’s men. But three points are three points, despite everything else that went on. Almost difficult to remember that (apparently) a football match was played today.

Through It All Together