Before Saints, it's time for a slightly belated look at the Brighton game on Tuesday! Tommy was there and shares his thoughts on a battling 1-0 win for Reading

Ian Harte’s 4th goal of the season and Adam Federici’s heroics in between the posts gave the Royals an absolutely massive win at the Amex Stadium against Brighton as they continue on their march to regain their place in the top tier of English football.

Nearly 3,000 Reading fans made the midweek trip to the south coast for what will have been for most, a first trip to the American Express Community Stadium. After enduring the chaos of Falmer station or the lengthy park and ride journey you couldn’t help but be impressed with the ground. Anybody that suffered the depressive experience of going to the Withdean will have appreciated just how big a step up Brighton and Hove Albion have made with their new home. Inside was just as good, locally sourced food meant some top notch pies and little touches like a ‘local’ Reading beer (London Pride) or the montage of Royals players on the ceiling made for a very different welcome. Baring in mind my last away trip was Millwall, the differences couldn’t have been more stark!

The only things that could dampen spirits came in the shape of the team news. Everyone knew Jem Karacan was out after his ankle break against Leeds and that Jay Tabb was unlikely to be fit but the news that Mikele Leigertwood was out with a knee injury and Hal Robson-Kanu also had a knock came as more of a surprise. It left Brian McDermott with limited options in midfield and so Tomasz Cywka came in for his first start for the club along with Hayden Mullins. The bench looked a little lopsided as well with three forwards but at least fans could breathe a sigh of relief that the living legend that is Brynjar Gunnarsson was available for what would be his first game since August 2011.

Perhaps mindful of the host’s capacity for retaining the ball and playing through teams and the untested nature of the midfield, Reading started the game very much as a 4-5-1 with Noel Hunt playing wide left and Jobi McAnuff and Hayden Mullins effectively replicating Leigertwood and Karacan’s roles in the middle.

It looked a little awkward and Brighton began the better but their failure to create anything meaningful in the early stages cost them as Reading made the break through. Gonzalo Jaro Reyes made a clumsy challenge on Noel Hunt on the left edge of the area and up stepped Ian Harte. It wasn’t the best of angles for the Irishman but helped by a massive deflection off the wall he wrong footed Brezovan in the Brighton goal and it spun into the bottom corner. 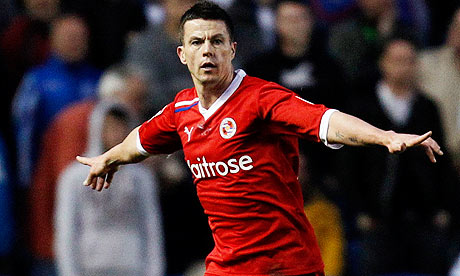 The goal didn’t really change anything as far as Brighton were concerned and they continued with wave after wave of attacks. Almost straight after the Royals’ opener Vicente had a shot blocked and Gary Dicker’s effort on the rebound forced a good reflex save from Adam Federici. Vicente should have then grabbed the Seagulls an equalizer. After jinking inside Cywka and exchanging a quick one two his close range effort cannoned off the bar. With 38 caps for Spain and two La Liga titles to his name he really should have done better.

Reading changed their formation around to a more familiar 4-4-2 and the side immediately looked more comfortable. Hunt had been fairly ineffectual on the wing but shortly after moving back up top it was his header from Cywka’s cross that represented Reading’s best chance before the break.

When Brighton came to the Madejski earlier in the season there was a lot of needle and on several occasions the home crowd were unhappy with some of the tactics employed by Gus Poyet’s men. Those same issues came to the service again at the Amex and the Seagulls were awarded a dubious looking penalty shortly after the start of the second half. Ashley Barnes had thrown himself over once and then the ball came back in he tried the trick again. This time, to Alex Pearce’s disbelief, the referee pointed to the spot. Barnes made the odd decision to go for a stuttered run up off only a few paces and his kick was weak. Federici did well to get down to the shot and kept the penalty out.

Still the attacks came and former Reading target Craig Mackail-Smith nearly saw his scuffed shot creep into the corner but again Federici was up to the task and palmed the ball away. That effort sparked a change to Reading’s approach and the ever reliable Gunnarsson came on for Cywka. The midfield pairing of Mullins and Gunnarsson may well be the slowest and least mobile to play for the club in recent years but they were certainly effective. They basically formed a wall in front on the back four, forcing Brighton to play wider. The ploy worked well, bar one great cross from LuaLua that Sam Vokes so nearly got a toe to.

At the other end Reading were finding chances hard to come by with Roberts and Hunt crowded out every time they got a sniff at goal. That said Alex Pearce should have put the Royals out of sight. He was unmarked in the middle of the six yard box when he met Harte’s free kick with a thumping header. The bar is probably still shaking but in the end it didn’t matter as McDermott’s men held on for a massive three points.

Brighton can probably feel a little hard done by given the amount of pressure they put the Royals under and the away side had their Aussie goalkeeper to thank on several occasions. You could sense the Seagull’s frustration and whilst the travelling fans were getting more and more nervous, they could at least be entertained by the ongoing battle between Adam El-Abd and Jason Roberts.

Reading are within touching distance of the Premier League now and two wins from their final four games should be enough to see them there.