For many Reading supporters returning from watching the team’s stunning win over Southampton to go top of the Championship , the evening was marred by what was waiting for them at Reading Station.

Because Thames Valley Police were there in massive force, in scenes more reminiscent of policing the miner’s strike in the 80s than policing of football fans returning to their home station after a great night out. Estimates of numbers vary, but everyone who was there agrees that the show of force was totally disproportionate to the level of threat. We’re talking about approximately 40 police officers, in riot gear, deployed with numerous dogs and acting extremely aggressively. This was demonstrably over the top. We are talking here about Reading supporters, after all –Reading supporters who had a grand total of 5 supporters arrested at all away matches in the whole of the 2010/11 season (according to official Home Office statistics ); and the same Reading supporters who are praised for their behaviour by police forces and stadium managers across the country – for instance the Police Commander at Anfield who came onto STAR’s coaches to thanks Reading supporters for their behaviour, saying that they were the best-behaved set of supporters to visit the stadium.

But it seems that to the police force in their own town, when these same supporters return from an away match they are deemed to be such a threat that a disproportionate and heavy-handed response like yesterday’s is deemed appropriate. It is even more ludicrous when you consider that this was Reading supporters returning to Reading Station – so there would be no potential flashpoint with away supporters. The contrast with the good-natured, low-key policing of this same set of supporters by officers from Hampshire Police in Southampton and British Transport Police before reaching Reading is so stark as to be embarrassing. 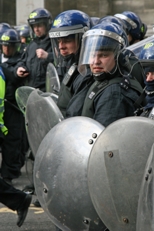 But read on, because Police behaviour gets even more outrageous ......

Because supporters are reporting that around 20-30 supporters were served with notices under Section 27 of the Violent Crime Reduction Act, 2006 (VCRA). These are essentially orders issued to individuals to remove themselves from a specified area for up 48 hours – intended to prevent “alcohol-related disorder”. It’s clear that Thames Valley Police served these notices onto around 20-30 supporters as they detrained, en-masse, in Reading, and tried to serve them on many others – others who pointed out that TVP were attempting to force them to remove themselves from a locality where they actually lived.

There is history of Police Forces using Section 27 orders against groups of football supporters – and this is a purpose for which they certainly were not intended to be used by the law-makers and which has been ruled illegal. A judicial review in 2009, which was carried out as a result of the work of the Football Supporters Federation and civil-rights organisation Liberty ruled what was suspected all along – Section 27 orders can only be applied to specific individuals (not large groups), and Police serving the order need to have good reason and evidence to support their assertion that anyone is “likely to cause alcohol-related crime or disorder.” Simply being in high-spirits or having had a drink is certainly not sufficient grounds, and the way these orders were applied to these supporters seem clearly to be nothing more than heavy-handed bullying– but also illegal heavy-handed bullying.

Just why should anyone be banned from Reading Town centre after the match – just because they’ve been to a great football match and are understandably in high spirits? Or is it because they’re a football supporter, and, in the eyes of many police forces, first-and foremost a hooligan? In the UK we have the principle of ”policing by consent” – as citizens, we agree to be policed and to give the police extra powers to enable them to do so. But a vital part of this “policing by consent” equation is that the police do not misuse those extra powers. What happened today at Reading station was a blatantly clear example of Thames Valley Police misusing their powers against a group of citizens who were singled out for the simple reason that their chosen leisure activity happens to be following their local football team.

As a result of the FSF’s activities, Greater Manchester Police apologised to and compensated a group of Stoke City supporters who were illegally served section 27 orders in Manchester, and South Yorkshire Police has also agreed to compensate Plymouth Argyle fans unjustly served section 27 orders when they played Doncaster Rovers in December, 2008.

All the indications I have seen so far make it clear to me that what Thames Valley Police did today in handing out section 27s en masse was illegal, and I’m sure the FSF will be happy to hear from any affected supporters. The FSF can provide specialist legal advice and assistance, free of charge, and can assist supporters in making the appropriate complaints to the Police to make sure that such policing will be a thing of the past. They’d also love to hear from any Reading supporters who were at Reading Station and were affected by this police operation. To contact the FSF, email info@fsf.org.uk or jon.keen@fsf.org.uk or check out the FSF’s “ “Watching football is not a crime” ” campaign page.

So, in summary, how infuriating is that what ought to be such a superb night is spoilt for so many Reading supporters by ridiculously heavy-handed policing tactics that are not only completely unnecessary but also illegal? As I titled this piece : “Police intelligence - now there’s an oxymoron” ... because tonight Thames Valley Police used no intelligence or knowledge of Reading supporters whatsoever. Whoever within TVP was responsible for these tactics should hang their head in shame – but of course they won’t. They’ll just come up with some fatuous weasel-words to try to justify them., as usual