Share All sharing options for: Southampton 1-3 Reading FC - Almost There.... 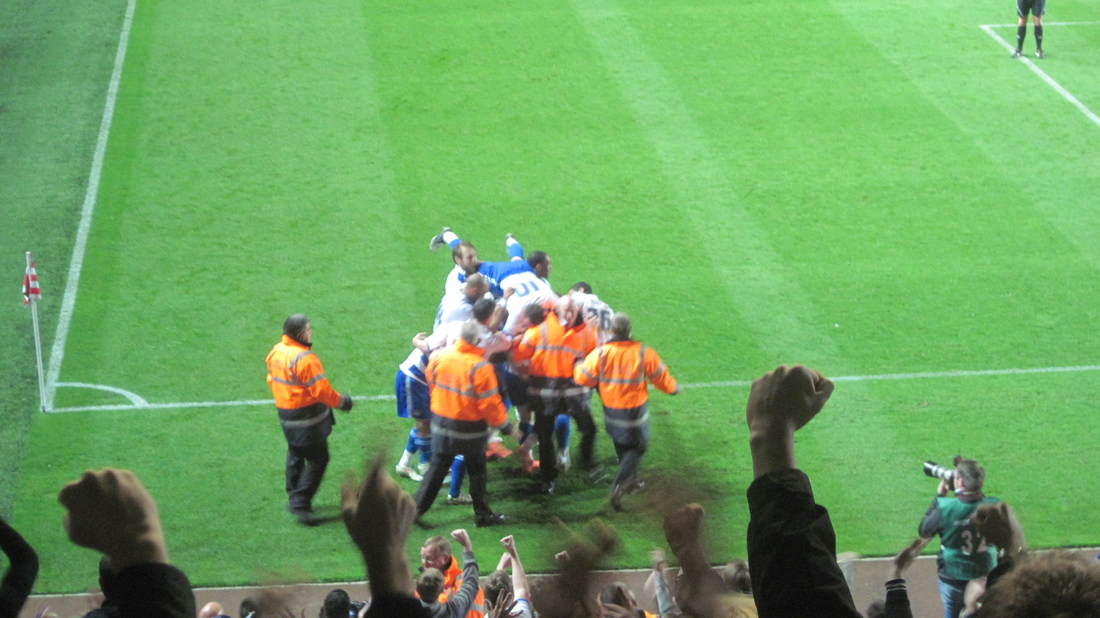 I'm probably not the only Reading fan who's woken up in a bit of a daze today. Last night's 3-1 win over Southampton edged us ever closer to a place back in the Premier League as 3,000 Royals in the away end yesterday were lucky enough to witness an amazing win.

The scoreline might seem slightly harsh if you're a Southampton fan, but this is what Reading have been doing to teams up and down the country the whole season and it's the reason that today, WE ARE TOP OF THE LEAGUE.

I've said in previews/predictions throughout the last few months that I fancied us to win this one, but after doing so well against Brighton and with the squad still so injury ravaged I had begun to fear that this one might be a game too far. Still, the mood in amongst the traveling fans pre-game was defiant, with the concourse ringing out with 'f**k off Southampton, the title is ours'.

On the injury front there was a return to the starting lineup for Jay Tabb who replaced Tomasz Cywka in an otherwise unchanged 16. Southampton meanwhile fielded a team spearheaded by Rickie Lambert and Billy Sharp who had 41 Championship goals between them, promising the biggest test that our back five have had to deal with this season. 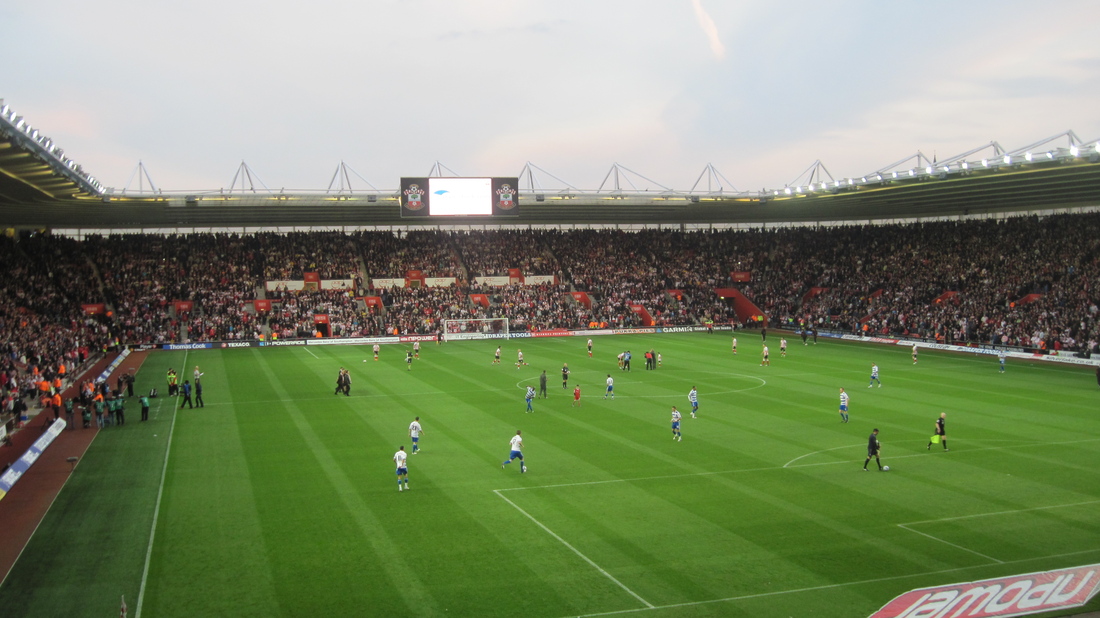 The opening to the game was fairly scrappy but it was clear we would be in for a typical Reading performance of sitting deep and giving Saints the ball in areas that couldn't directly hurt us, before looking to hit them on the break. That strategy has served us so well this season but good gravy is it tough to watch from a fans point of view! It's even more alarming when the opposition wriggle free into shooting range and Rickie Lambert tested Federici after just four minutes when our Aussie No.1 had to push the Saints strikers low drive wide. Adam Lallana was also proving a bit of a handful and he nearly put Saints 1-0 up when his shot hit Gorkss and seemed destined for the bottom corner only for Fedders to once again get there to make the save.

At this stage you worried it might be another backs to the wall effort like we'd seen at Brighton but then with pretty much our first chance, Jason Roberts put Reading ahead. Jimmy Kebe had been quiet for the first 20, but found some space on the right hand side and delivered an exquisite cross that Roberts judged perfectly to nod home.

Southampton responded well to the setback and kept the ball well but their end product often deserted them, with a couple of free headers missed and their final touch in key areas lacking. One such man who wasn't having the best game was Southampton's Richard Chaplow who can count himself somewhat fortunate to be on the pitch after going for the ball against Federici when the ball had all but gone, leaving his studs up and into the Aussie 'keeper. The replays show that his eyes were on the ball but you could have easily justified a red card. As it was, Chaplow escaped with a yellow and Reading went into the break 1-0 up.

Remember last season when it seemed that we'd always concede straight after the break? That old habit reared its ugly head again last night as Southampton found themselves level just three minutes after the restart. Pearce cleared the ball into the stands and from the resulting throw in the ball found it's way into the box to Lambert, whose half volley hit Gorkss and went over Federici and into the net.

I expected a bit of a Southampton onslaught but really the home side looked leggy and tired, lacking that extra bit of umph they needed to batter down the Reading defence. Every Reading player worked hard to make sure that Southampton had no easy pass to make and it really wore them down as the minutes ticked on.

Brian McDermott has always made substitutions to win games and while the safe option would have been to bring on Bryn for a tiring Tabby on the hour, he instead threw on Adam Le Fondre to play up front with McAnuff moving into the middle and Hunt going on the left. It took just ten minutes for the move the pay off as Kebe, wriggled into space on the right and cut the ball back across the box. Noel Hunt pulled off a brilliant dummy and there was Le Fondre who smashed the ball high into the Southampton goal right in front of the traveling faithful. If we go up it'll be in no small part to the former Stockport man whose winners against Watford, Millwall, Leeds and Southampton have been utterly utterly crucial.

That just left a nervy 20 minutes to hold on but again Southampton really struggled to raise themselves and Reading saw them off fairly comfortably before putting the icing on the cake with a third goal. A long ball was nodded on and bounced between the keeper and the defender, leaving Alfie to tussle with the Saints defender. There was only going to be one winner and Le Fondre controlled the ball well, guiding it round the despairing Kelvin Davis before slotting it home. Cue party time in the away end and an amazing end to another magical day following Reading Football Club. 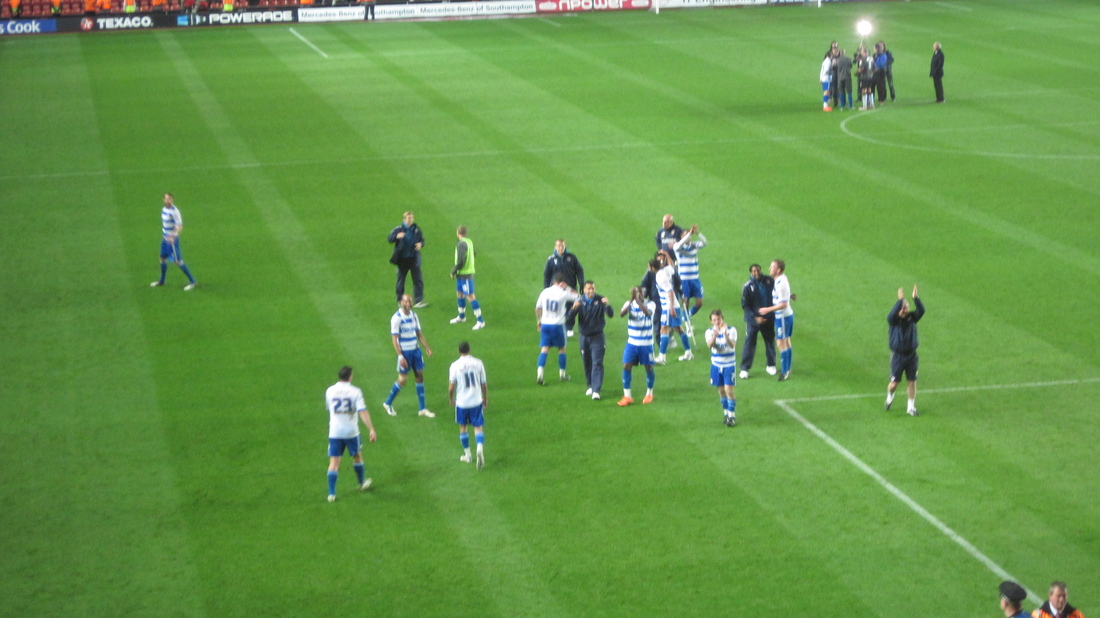 Performance wise and everybody had their key moments in what was another awesome team performance. In the first half Shaun Cummings and Jason Roberts stole the show while Le Fondre obviously deserves tremendous credit for taking his two goals so well. Jobi McAnuff was hard working and while Jimmy Kebe was anonymous for large periods, he made two goals and those moments of inspiration are exactly why he's in the team. The back five had a real battle with Lambert, Sharp and Lallana and while the Southampton trio did have their moments, Federici was up to the task and the rest of the back four all made their headers and blocks when it counted the most. Mullins and Tabb were OK, though they couldn't quite provide the intensity that we'd have gotten from Karacan and Leigertwood. Noel Hunt put in his usual hard work but didn't really get sight of goal while Jason Roberts worked tirelessly up front all night and caused plenty of problems. Le Fondre's role in the win needs no explanation while Benik Afobe looked lively in his brief time on the pitch.

In all seriousness this wasn't our most convincing performance of the season and Saints had almost two thirds of the possession but then again it was away at the league leaders so we were never going to dominate proceedings. Tabb and Mullins were OK but as mentioned you'd feel a lot more secure with Leigertwood in there. Jimmy Kebe is also still clearly carrying an injury as he's not bursting past a player in the way we know he can. Those are only tiny nitpicking points though as everyone did their job and every single Reading player played their part in a memorable night on the South Coast.

Both sets of fans deserve a huge amount of credit for generating a cracking atmosphere that stayed good natured before during and after the game and personally I hope both sets of fans are celebrating on the last day of the season.

Last night was also our 13th away win of the season, equaling our previous record of 13 set in the 85/86 season, while we've also got the most at this level since Sunderland recorded 13 in 2004/05.

The only sour note comes from reports of problems at Reading train station after the game which fellow TTE writer URZZ1871 has written in detail on here.

Even that couldn't take the shine off of a fantastic night to be a Reading fan and we can now sit and enjoy the next few days knowing we're top of the table and could seal promotion as early as Tuesday if we win and West Ham fail to win either against Brighton or at Bristol City.

So I'll hopefully be seeing around 22,000 of you on Tuesday night, I hear there may be a bit of a party at the Madejski Stadium