Share All sharing options for: The Big Bad Wolf

Thursday 26th January. Not a day that immediately sticks in the mind but it could just be the day that Reading secured their place in the Premier League. It wasn’t a day that saw the Royals win an important game, it wasn’t when those above dropped points, it was the day that Jason Roberts arrived from Blackburn Rovers.

Jason Roberts makes the best move of his career

I’m sure I wasn’t alone in being a little bit wrong footed by the signing of Jason Roberts, after all the club weren’t exactly short of forwards and we were going pretty well. Why then did we need an aging player that couldn’t make a struggling Rovers side? I, along with all the other doubters, should have known better. Brian McDermott knows his stuff and he knew his man. Roberts hadn’t been playing due to a contractual dispute and his age belied both his hunger and his fitness. The impact of his arrival couldn’t have been more instant as he went straight into the side to play Bristol City, scoring the only goal in a 1-0 win to cap an impressive debut.

On the field he has been a real revelation. Any question marks over his ability, fitness or desire were put to bed very quickly and he’s made himself a key player in the side. Previously it had been hard to really find an effective pairing out of Noel Hunt, Simon Church and Adam Le Fondre but Roberts has managed to be the catalyst to get the best out of all of them. I must admit that coming into the side I thought it would be Le Fondre that would be his initial partner but instead it was Hunt and they have gelled remarkably quickly. Hunt now seems to have more of a purpose to his game and their link up play has been excellent. The Irishman’s aerial ability has improved immeasurably and his flicks-on are invariably finding Roberts who has the strength and intelligence to make the most of the possession. Suddenly the side have real direction going forward. 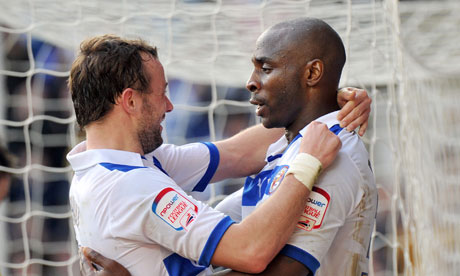 Noel Hunt and Jason Roberts have built a great relationship

It may sound counter intuitive but Le Fondre and Church also seem to be playing better since Roberts’ arrival. It’s a simple formula but if the side are winning, Church comes on and the Welshman’s role is simply to run the channels and generally be a nuisance to defenders; if on the other hand a goal is needed, on comes Alfie and all he needs to worry about is playing off the last man and getting himself in the eighteen yard box to put the ball in the net. It plays to both their strengths and means they can concentrate on what they do best. Before Roberts came along we weren’t really seeing the best from either of them.

I have a theory as well that his presence in the dressing room is such that he’s taken a lot of the weight off Jobi McAnuff’s shoulders. The Reading captain’s early season form was slightly erratic and it looked like the weight of the armband was preventing him from playing his natural game. Since Roberts’ arrival his performances have definitely picked up. Granted the same can be said of the rest of the team but for me McAnuff has regained the consistent quality that was so impressive last year. It may be just be coincidental but I do wonder whether having a character like Roberts around, someone who seems to be a natural leader and more of a talisman, has just given McAnuff that little bit more freedom to get on with the job of playing.

Roberts’ impact on the pitch is only part of the story, albeit a pretty important one, but his off the field presence cannot be underestimated. The title of this piece is ‘The Big Bad Wolf’ and it’s something that seems to have come to embody the team spirit at the club. It all stems from a dance track that Jem Karacan was fond of. I can’t say it’s to my taste and certainly the video is one that can’t really be put in this article (although you can check it out here should you so wish) but the thumping tune was picked up by Roberts and he’s turned into something of an anthem for the team. ‘Sweet Caroline’ it ain’t but after every game it can be heard booming out of the changing room and every win sees various players taking to Twitter to laud ‘the big bad wolf’. Roberts recently admitted on Sky's Soccer AM that he seems to have ‘become’ the big bad wolf and I think he’s right, he personifies a lot of what makes the side, and to an extent the club, so fantastic.

It’s astonishing how quickly it has happened but within the space of three months Roberts has become synonymous with Reading Football Club. He is the face for a professional, modest, hard working, unassuming, hungry team but most importantly he is a winner and a grafter. He may not be the most gifted footballer but he is a big match player. He’s secured two promotions to the Premier League with West Brom and Wigan and his goal against Wolves on the final day of the 2010/11 season was vital in keeping Blackburn in the top flight. That experience is manifesting itself now as Reading are tantalizingly close to being his third promotion and it could well prove vital for any future Premiership campaign.

There’s more to Jason Roberts than just Reading Football Club though as this remarkable man has many different irons in many different fires. Most football fans will be familiar with his work on BBC Radio 5 Live’s 606 football phone in which he has been doing since the start of the season. Given the nature of the programme, it’s a brave job for anyone to do but especially so for a current player who at the start was on the books of a club where the manager and owners were subject to such controversy in the form of Steve Kean and the Venkys at Blackburn. It’s an experience that he’s described as ‘therapeutic’ but it does seem that with his years as a professional footballer coming to an end, his media work will be something that he pursues more vigorously. Having said that, I do wonder whether this awful advert for Venky’s chicken may come back to haunt him!

If he decides against going down the well-trodden route of ex-footballer-turned-pundit then perhaps some kind of Michel Platini-type move into football governance could be in the works. At the end of February, with racism in football the topic du jour, Prime Minister David Cameron hosted a discussion at 10 Downing Street on the subject. Various luminaries were invited along including John Barnes and Trevor Brooking but also there was our very own Jason Roberts. It’s a measure of the respect that he commands amongst his peers and also in the larger footballing community that his views on a subject of such magnitude should be so respected.

Much like fellow current Royals Jobi McAnuff and Mikele Leigertwood, Roberts may be a London boy but he is very conscious of his links to the Caribbean. In his case those links are to the tiny island of Grenada. Like his teammates geography is the main barrier for him in playing regular international football for his country and whilst 7 goals from 10 games is a great return, he knows that he can make more of an impact to the country away from the football pitch. Similar to ex-Reading player Shaun Goater in Bermuda, Roberts has set up a football academy in Grenada along with various other projects including legends fundraiser games both here and in the Caribbean. All this is done through the Jason Roberts Foundation which he set up in May 2007 with his footballing relatives Cyrille and David Regis and Otis Roberts. Like Goater he was rewarded for this, and all his other work, with an MBE in the 2010 New Year’s Honours List. He became the third member of his family to receive the honour after his uncles, the aforementioned former West Brom striker Cyrille Regis and athlete John Regis.

Maybe it’s the fact that he’s got such a strong sporting family pedigree, maybe it’s because he started out in non-League with Hayes, maybe it’s just an innate character feature; whatever it is Jason Roberts’ passion for the game is palpable and it is proving to be the final piece in Brian McDermott and Reading’s puzzle. I suspect that the majority of fans couldn’t give a stuff what he does off the pitch so long as he produces the goods on it but I for one am proud to have such a genuine ambassador for the game wearing the blue and white hoops. Jason Roberts, I salute you.