Who Are Reading's Biggest Villains? - The Inaugural Class Of The Reading FC Hall Of Shame

Share All sharing options for: Who Are Reading's Biggest Villains? - The Inaugural Class Of The Reading FC Hall Of Shame 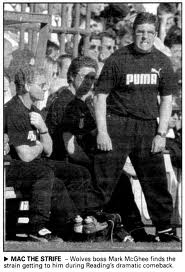 It's football's awards season and congratulations must go to Ian Harte who's been named in the PFA Team Of The Year for the second year running. More accolades will surely follow for Brian McDermott and the players but as a bit of fun I thought I'd hand out a few awards to people who over the years have made Reading's life a misery and put them into a Reading FC Hall of Shame. Will we meet again?

The pre-season favourites for this category would obviously be our three main local rivals, Aldershot, Oxford and Swindon. Many older fans attest to the animosity between Reading and Aldershot fans and it got nasty on more than one occasion in the dark footballing days of the 70's and 80's. Into the 90's and Aldershot's disappearance into non-league left Oxford and Swindon as our main rivals and the three teams enjoyed regular contests in front of good crowds between 1994 and 2002. Since then Reading haven't been out of the top two divisions while neither Swindon nor Oxford have made it above the third tier and there's a generation of new fans that have never sampled a 'local' derby. On the one hand it's fun to see our rivals struggling but I don't think I'm alone in wishing we have the chance to play the odd cup tie against them in the next few years.

Another group to consider is our bogey teams over the years,with sides such as York, Colchester, Bury and Arsenal all holding hoodoos over us in recent memory. Arsenal in particular have the distinction of never having lost to the Royals in a competitive game and they were the only Premier League team that we never got close too in our two years in the sun a few years ago, here's hoping that record goes next year.

So you're one of the 'useless' kids Wenger plays in the Carling Cup eh?

Then there's our play-off conquerors. Walsall, Wolves, Burnley and Swansea have all ended our seasons in the most painful of ways but can you be a bigger bully than Bolton who so cruelly ended our Premiership dreams in May 1995?  Jim'n'Micks Barmy Army were minutes away from completing a fairytale rise to the top flight and bringing Premiership football to Elm Park for the first time in it's near 100 year history. Then goals in the last 15 minutes from Owen Coyle and Fabian De Freitas broke Reading fans' hearts. Not content with denying us promotion in 1995, Bolton then played a major role in our relegation from the Premier League in 2008 by completing the double over Steve Coppell's team including a key 2-0 win at the Madejski that helped them leapfrog Reading out of the dropzone.

Of course you could throw in some other teams that you just love to hate. After their recent antics at the Madejski you can easily justify throwing Leeds into the hall of shame. Similarly any Neil Warnock side that's played us over the years has generally been less than sporting, while West Ham's actions in the luring of Alan Pardew still leave a bitter taste in the mouth. Portstmouth have also angered Reading fans in recent years, partly due to their capitulation against Fulham that helped relegate us in 2008 but also due to the massive financial mismanagement that has shocked the wider footballing world.

If I have to pick one, then for me personally it has to be Bolton for the heartbreaking way they beat us at Wembley 17 years ago. In 1995 we were still a fairly small club, with 9,000  or so regular fans in a rusting old stadium and part of you felt we'd never get a better chance of Premier League Football so to have our big chance taken from us was devastating.

Again you can quite easily throw play-off villains into this one! Fabian De Freitas, Darren Byfield, Alex Rae, Martin Patterson and Scott Sinclair all warrant such status for their roles in our play-off failures while Danny Murphy & Chris Bart-Williams also deserve consideration for scoring goals that relegated us in 2008 and in 1998 but there have been plenty of other players to wind us up over the years.

Michael Brown has certainly re-affirmed his candidacy for the hall of shame this season after breaking Jem's ankle while playing for Leeds, while Reading fans will never forget Richard Carpenter who ended Chris Casper's promising career with a horrible tackle in the late 90's. Former Manchester United trainee Casper won more than a million pounds in damages for the tackle but wouldn't ever recover from his injury and had to retire.

Craig Bellamy has also always been a thorn in our side. First he spoiled the last ever game at Elm Park by scoring the winner for Norwich on the last day of the 1997/98 season then he came to the Madejski with West Ham and helped inflict a convincing defeat in 2007 before scoring a 98th minute free-kick to deny us a win at the Cardiff City Stadium last season. Throw into the mix his general theatrics and the bottle-throwing spat at the end of the aftorementioned game in Cardiff and it's pretty safe to say he's off most of our Christmas Card lists.....

The last man to score a goal at Elm Park

Another man that always seems to find the net against Reading is Rob Hulse, who's managed to score 5 goals against Reading in the last 8 years for Leeds, Sheffield United and Derby while Neil Harris has also scored 6 against us for Millwall over the last decade or so. There's also a certain former Bristol Rovers paring of Jason Roberts and Jamie Cureton who both have four goals against us.

For this one I'm going to have to give it to Bellamy, for a 14 year spell of annoying Reading fans, with honourable mentions to Neil Harris and Michael Brown.

Again some pretty obvious candidates here, starting with Mark McGhee and Alan Pardew who both walked out on the club with the team doing well. McGhee left us to join a struggling Leicester but at least he left the division unlike Pardew who walked out on Reading to move to West Ham who were LOWER than Reading in the Division One table.

Neil Warnock has always caused trouble for Reading, with his sides playing a style of football that while 'effective' can at best be described as industrial. Reading have generally had the upper hand on his teams over the years but they've left their mark, as Jem Karacan can certainly attest to. 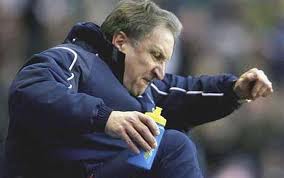 Brendan Rodgers is also still a love/hate figure amongst sections of the fanbase. The former Reading manager didn't endear himself to some fans with his media appearances and that coupled with the worst start to a Reading season in over a decade didn't see him survive long at the Madejski. The former Reading Academy director then went to Swansea and beat Reading three times, the third of which coming at Wembley in last year's play-off final.

We generally support any player who pulls on a Reading shirt but there are one or two who managed to sour the opinion of Reading fans over the years. In terms of attitude then the way players like Stephen Hunt and Nicky Shorey left the club were disappointing and was one of the worst aspects of the last Premier League era.

There's also been a fair few big money flops and while you can't blame the player for how much the club paid for them, you'd have been hoping for a lot more from men like Sean Evers, Emerse Fae, Greg Halford  and Keith Scott. 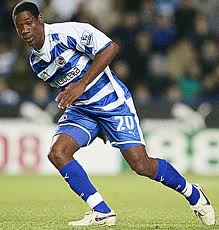 And then there's just players that seemed totally hopeless and ones you almost feel a little bit sorry for. Paul Brayson arrived at the club with an impressive record at reserve team and U18 level for Newcastle yet the striker managed just one goal in 44 appearances in three seasons at the club. Michael Meaker arrived at Elm Park as the replacement for Simon Osborn but never got close to Osborn's impact while poor Simon Sheppard and Peter Van Der Kwaak were amongst the worst goalkeepers I've ever seen. In more recent years Darren O'Dea and Bongani Khumalo endured a miserable loan spell here under Brendan Rodgers while Marcus Williams made a handful of appearances before disappearing back to League One. But if you're really talking hopeless then step forward Mark Reilly....It's hard to put into words how bad he was during our first year at the Madejski and it's tough finding survivors to tell the tale...

Winner wise though and I can't fault players for a lack of ability but I can if they have lack of ability, a terrible attitude and a massive transfer fee and the one man to fit under all three of those is Emerse Fae.

But we want to know your thoughts, who deserved to go in and who didn't? I'm sure there's plenty that I've missed over the years.

Again it's just a bit of fun and it's just a game but for every hero we support on the pitch we need a villain so in a way I thank this class for keeping football interesting and making up a part of our wonderful game.