Share All sharing options for: Birmingham 2-0 Reading FC - Brum Fail To Deflate Royals Fans As They Wave Goodbye To The Championship 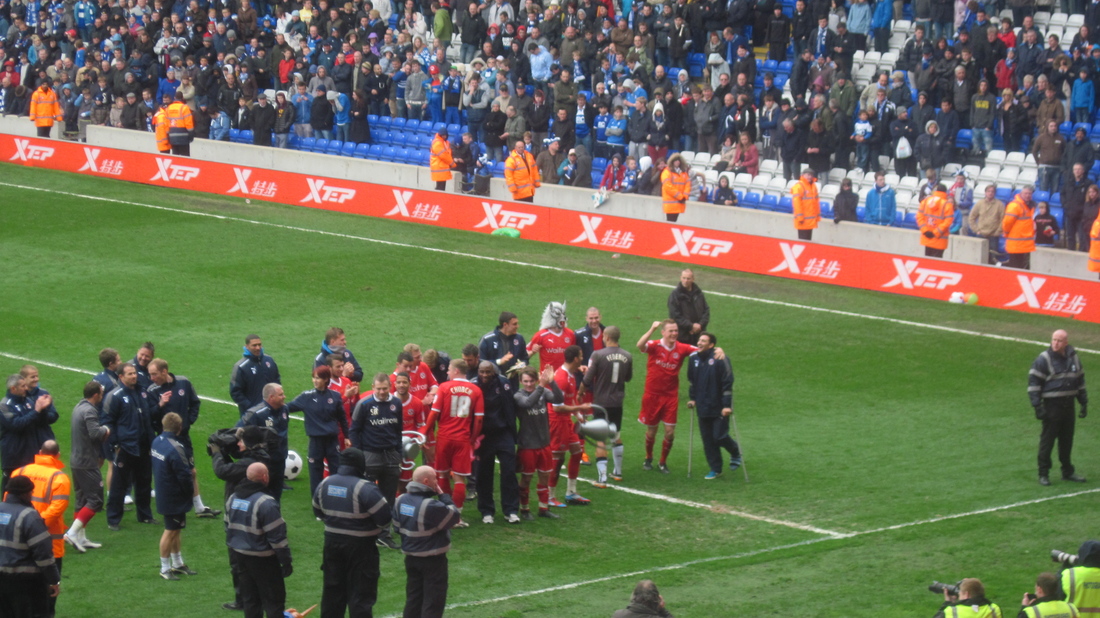 After two weeks of celebrating promotion it didn't come as the greatest of surprises that a much changed Reading side came undone at the hands of Birmingham, who clinched fourth place in the Championship with a 2-0 win at St Andrew's.

Despite the defeat and a miserable day weather wise, it was still another awesome day to be a Reading fan, with the traditional end of season inflatables and over 4,000 Royals fans helping create a great atmosphere, one worthy of Champions. 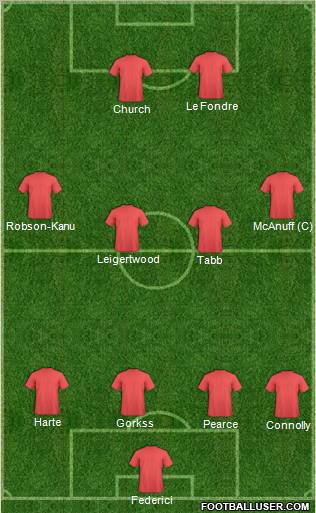 As you can see from the above it was far from a traditional Reading lineup, with Jason Roberts suspended, Jimmy Kebe and Jem Karacan injured and Noel Hunt and Shaun Cummings rested. That meant starts for Simon Church, Adam Le Fondre, Hal Robson-Kanu, Jay Tabb and Matthew Connolly. Neither Church nor Connolly had started for months and while it was nice to reward two hard working members of the squad, it showed that we weren't taking the game ultra seriously with the Championship wrapped up.

Birmingham on the other hand still had something to play for, knowing a win could see them earn home advantage for the second leg of the play-offs and fielded a strong team at a venue where they've lost just once this season.

The pre-match atmosphere was amazing amongst the 4,000 or so traveling fans, who brought a massive amount of inflatables, from goal posts to aliens, dolphins to jumbo jets and guitars to giant chairs. There was also a lot of fancy dress about, with the Incredibles, Scooby Doo, Captain America, the Royal Family and even Brian McDermott, Sal Bibbo and Nigel Gibbs all in attendance amongst the away fans.

The game itself wasn't particularly memorable for the first 20 minutes where the biggest entertainment was various stoppages as Federici had to kick away and deflate three or four inflatables that escaped the stewards in front of the Reading fans. As the half wore on Birmingham slowly began to assert themselves despite losing giant striker Nicola Zigic to an injury after around 20 minutes. He was replaced by Adam Rooney and it took Rooney just four minutes to put the home side into the lead after Nathan Redmond burst through and slid the ball across to Rooney who couldn't miss.

Reading tried to respond as best they could but they lacked the cutting edge up front that Roberts has given them since Christmas. Adam Le Fondre worked hard when given his first league start of 2012 and he came closest to getting Reading level before half time only to have two efforts hacked off the line, the first of which could also have seen him awarded a penalty. Sadly those were rare moments of attacking quality from the Royals, with neither Church nor Le Fondre really looking overly threatening.

Meanwhile Redmond was giving the Reading defense plenty of problems with a long range effort going just wide and Federici forced into making a near post stop from former Burnley man Wade Elliot.The Blues also hit the post late on in the first half, with Ibanez nearly doubling the home team's lead.

Into the second half and Reading had a couple of great chances to get themselves level, first when Church was just beaten to a low cross by Curtis Davies five yards from goal and the second after Ibanez fouled Alex Pearce in the box to earn the visitors a penalty. Despite chants of 'Adam Federici' from the away fans, it was regular spot-kick taker Ian Harte that stepped up, but Harte saw his effort easily saved by Doyle down to the keepers right and the rebound was safely hacked away. 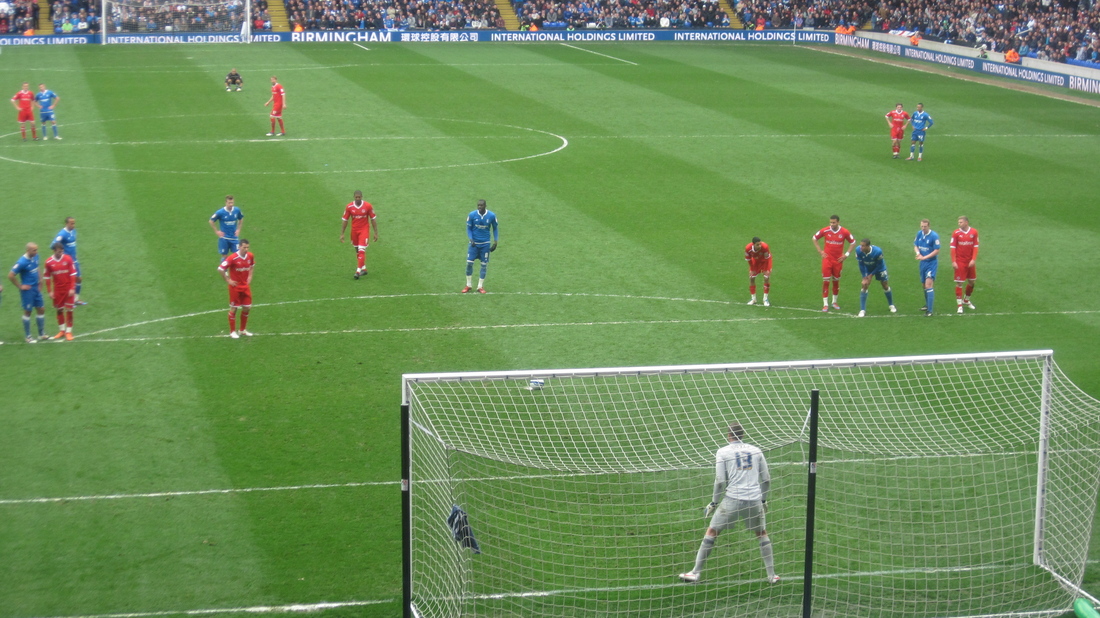 That was about as close as we'd get for the rest of a wet and cold afternoon in the Midlands and Birmingham sealed all three points when Tabb was penalised for handball in the box and Elliot tucked home the resulting penalty. It could have been 3-0 by the end but thankfully Federici saved the game's third penalty, his second save in three spot-kicks, to keep the game at 2-0, which is how it finished seconds later.

As has been well publicised there was no trophy presentation after the game but the Reading players did come over to the away fans and celebrate for five or ten minutes to give the traveling Royals something happy to go home with.

Performance wise and this was more like the Reading that started the season than the team that stormed to top spot in the last few months. It's not fair to take too much from what was on paper a 'meaningless' game but in truth this was a bit chance for players like Robson-Kanu and Church to show that they are worth a place in next season's squad and neither covered themselves in much glory. Both men worked hard and both didn't have a great deal to work with but a failure to make an impact in a game like this does not bode well for their long term prospects.

Church especially looks under threat, with him slipping well behind Roberts, Hunt and Le Fondre he's looking like someone that might just be moved on or loaned out at the start of next season. I can't fault the Welsh forward for effort and he's grabbed some key goals this season but right now he doesn't look like a player comfortable leading the line in the Championship, yet alone the Premier League. He's certainly got potential but delivers an equal amount of frustration, with fellow Tilehurst End writer Jonafon slamming his inflatable shark into the seat after he missed a chance yesterday, RIP Sharky. Seriously though, you do have to wonder whether it might be easier for Church to reach his potential by playing every week for a team that creates plenty of chances in a lower division, rather than being a squad member in a team that's going to be have to work very hard to create chances in the Premier League, feel free to prove me wrong Simon and as I wrote earlier we might be in danger of writing you off too soon.

Adam Le Fondre also worked hard, though didn't have too much to work with, while of the other 'non-regulars' Connolly and Robson-Kanu both looked OK and with the former coming off an injury and playing just 62 minutes I won't really make any real judgements on his performance. Robson-Kanu wasn't stunning but did get to the byline a couple of times, though his passing was poor and he'll be kicking himself for not making more of an impact in these last two games when starting in place of Jimmy Kebe.

Jay Tabb was the pick of the bunch after putting in a real battling shift in the centre, winning countless tackles and playing nearly as well as Karacan was before his injury. Once or twice his passing let him down but I think Tabb has shown enough in recent weeks to show that he's well worthy of a place in a Premier League squad and deserves his first shot at the big time... plus I don't think he's allowed to leave until he's scored at least once.

Out of the regulars and Adam Federici was dependable as always and couldn't do much about either of the goals. Pearce and Gorkss dealt well with the majority of what was thrown at them, while by playing 90 minutes, Alex Pearce ensured he became our first outfield player since James Harper in 2008 to start every league game of the season. His penalty miss aside you couldn't really fault Ian Harte while Mikele Leigertwood and captain Jobi McAnuff also put in a steady displays without being that effective going forward. Cummings and Gunnarsson came off the bench with Cummings looking good but sadly Gunnarsson's only real impact was giving away a series of fouls including the second penalty.

So that brings to an end the 2011/2012 Championship season, one which will never be forgotten by Reading fans. The team could well have been bottom of the Championship had they lost to Doncaster on the 17th of September but from that day lost just seven times and picked up 85 points out of a possible 120 to storm to the top of the table and earn a second stint in the Premier League.

Over the coming days, weeks and months we'll look back in detail at an amazing season for Reading Football Club and also look ahead to what is sure to be another memorable season in the Premier League.

For now all I want to say is thanks to everyone who's read the site this season and especially to those of you who have written pieces and commented on others, it's very much appreciated. If you want to get involved we're always happy to take on board contributions and just email us at thetilehurstend@gmail.com