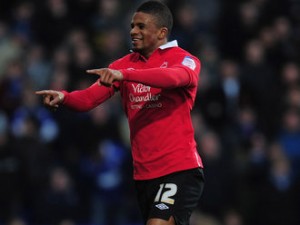 So Reading have made their first summer signing, with Nottingham Forest winger Garath McCleary joining on a free transfer and signing a three-year contract at the Madejski Stadium.

The 6 foot 2, 25 year old winger was recently named Forest's player of the season but coming into this season had never started more than 10 games in a league season so what can we glean from his past to understand why Brian may have decided to make him our first Premier League signing.

Personally, McCleary only really came to my attention on the way back from the defeat to Peterborough when I looked at my phone and saw that he'd scored four goals for Forest in a remarkable 7-3 win at Leeds.

He made his City debut in the 2004/05 season while still just 17 and also represented England's Under 19 College side out in Italy, having been singled out for having great pace. His first manager was Andy Sinnott said of McCleary recently...

“You could tell that he was going to be a good player. He’s got something that you can’t coach and that is exceptional pace.

“He’s so level-headed and it is great to see him doing so well.”

He would make a handful of appearances for City before moving to Brian McDermott's former club Slough who were in the Isthmian Premier League, the seventh tier of English football.

The winger stayed with Slough until March before the club found themselves in financial trouble and McCleary found himself without a team. However, he soon signed on with Bromley but picked up a serious injury that played a part in leading McCleary to consider quitting the game to go into further education.

"I fractured my leg in July 2006 and I was considering packing up,

But my family told me to stick with it and give it another year and that is what I have done. I am happy that I have made that decision.

He would end up playing over 30 times for Bromley before catching the eye of Nottingham Forest manager Colin Calderwood after scoring against Eastleigh, a goal you can see below.

Despite picking up a knock in that game, McCleary would head up north to play for Forest in a behind closed doors match a week later aganst Notts County. A decent performance did enough to persuade Calderwood to pay Bromley £20,000 for his services with McClearly signing his first professional contract with the former European Cup winners at the age of 20. A goal on his reserve team debut followed closely followed by a league debut in March of 2008, when McCleary came on against Carlisle as an 87th minute sub for another current Premier League player, James Perch.  The former non-league player would add a first league goal in just his third appearance, also against Carlisle, a couple of weeks later when he tapped in from just outside the six yard box.

McCleary made a handful of starts over the final few weeks of the season as Forest earned promotion to the Championship with the winger earning his first taste of Championship football, against Reading, as a late sub in an opening day 0-0 draw at the City Ground.

The Oxfordshire born player ended up making 43 appearances for Forest that season, mostly from the bench, scoring one goal and making four more as Forest ended the season 19th.

McCleary signed a new three-year deal at the start of the following campaign but despite his team reaching the play-offs, the 2009/10 season was a frustrating one for the 22 year-old. McCleary would start just one league game and earned more red cards than goals after being sent off at Doncaster.

The winger once again endured a tough season the following year, earning just eight league starts for Forest in the 2010/11 season and scoring one goal. He did earn a rare start in the 4-3 defeat to Reading in April but couldn't dislodge Paul Anderson from the team and had to watch on from the bench as Forest again lost out in the play-offs, this time to Brendan Rodgers' Swansea.

Will Ward of the Football Fancast wrote about McCleary's early time at Forest and his struggles can be compared to those suffered by Jimmy Kebe and more recently Michail Antonio.

"If there is one word that has stayed with McCleary during his time at Forest, it’s been ‘promise’. By some, he was labelled as the ‘super sub’, and nothing more, because in seasons gone by he’s rarely got a run of 3/4 games, where he could establish himself, and unveil himself so Forest fans could make an accurate assessement of his ability.

In his place usually in previous seasons was the energy of Paul Anderson, who was a Billy Davies type player, hence why he was favoured over the hungry and patient McCleary.

In defence of Billy Davies though, playing Anderson worked. As the saying goes, ‘If it’s not broken, don’t fix it’. Without a doubt, it wasn’t broken. It was just a matter of whether Billy had it in him to gamble on McCleary, with the fear that it may damage the way the team was currently playing, which was rather successful, managing 2 consecutive playoff places. In addition, it was occasionally evident that Billy didn’t have faith in McCleary, which reflected in McCleary’s play in patches of last season, every so often not parading past a player, when it was ever so blatant to fans McCleary had all of the attributes to do so."

McCleary's patience again had to be tested at the start of last season as he watched the Steve McClaren era rise and fall from the bench and the treatment room. The Forest midfielder would have to wait until December to make his 2011/12 seasonal debut, but once he did he never looked back.

Garath would start 21 times over the next six months, scoring nine times and providing seven assists as Forest slowly eased themselves away from the  Championship relegation zone. Only a red card at Peterborough derailed a season which saw McCleary voted player of the season, despite having featured in less than half of Forest's games.

So that's his background but what can we expect from the player moving forward? To get more insight I spoke to our regular Forest contributor Winnits who kindly answered a few questions for us below.

So Reading have signed Garath McCleary what are your overall impressions of his time at Forest?

If you'd asked me half way through the season I'd have said something like 'frequently injured, patchy in form, eager and capable of brilliance, but often a poor decision-maker' - under Billy Davies he was a fringe player who was used sparingly owing to a knee problem that limited his ability to play consecutive games - this was operated on in the summer, when of course Captain Clusterf--k (aka Steve McClaren) arrived and pretty much ignored GMac. When Cotterill reintroduced him he produced the form that contributed a huge amount to us staying up, and put him on other clubs' radar. He loves scoring against Leeds, which is a bit of a tricky unless you get them in the cup.

Looking at clips of him he seems comfortable using either foot and operating on either wing, but does he have one you'd probably see him used on more?

He's right-footed, but pretty capable with his left - he played on both flanks under Davies but was mostly deployed on the right by Cotterill which was his best spell for us. This was in no small part due to his excellent partnership with our right-back Chris Gunter. No, forget I said that, don't go bloody signing him too!

Everyone knows about his four goals at Leeds but what is his finishing like overall?

His shooting is pretty good actually, with both feet - he's pacey and has a few tricks which is probably why he's ended up on the wing. His crossing, by and large, has been pretty poor (although given the number of people we manage to get to stagger into the box to attack them, that might not be his fault entirely).

Some have suggested he could be more of a striker than a winger could you see him 'doing an Henry?'

Obviously he's isn't in Thierry's league, but yes I could - he's very direct with his play and I think if you stuck him in the middle and got him running onto throughballs or running at defenders his natural inclination could see him be very effective. I mentioned above that before his purple patch I'd have pulled him up on poor decision-making, and that was as a winger choosing when to take a man on, when to cut in, when to play a cross - of course, with coaching and with better team-mates these issues can all be improved upon.

I've not really heard many stories regarding him at all - he's always come across as a very level-headed bloke who works hard at his game and has had limited opportunities to get an extended run in the team, whether it be through injury or through the manager being a ginger-haired brolly-holding buffoon - when he got that chance he grasped it. He generally presents a very good impression of himself when at fan events or in media appearances.

Is this his level or will he be capable of even bigger things?

Hard to say - how many of us would've said Grant Holt would settle in to the Premier League so well? And I quite liked Holt unlike many Reds fans. I think he has the potential to succeed - he's got pace, skill and can finish - whether the higher standard of defenders he'll meet, and whether he can thrive if he doesn't get picked for an extended run of games at Reading it remains to be seen. I hope he continues to do well though, I think we owe him one for his contribution to keeping us up this season and wish him the best with the Royals.

So we've undoubtedly signed someone with promise and with Kebe and McAnuff not without their injury problems and neither Antonio nor Robson-Kanu really staking a claim for a regular starting berth, he'll be given every chance to cement himself in our Premier League squad. With Reading paying a reported £15,000 in wages for his services and seeing off the challenge of several other clubs, it's clear he's very much rated by the management and in Brian we must trust.

Welcome to Reading FC Garath and here's hoping you can add to the highlight reel below!