Our final stop in our position by position review of the 2011/12 season sees us look at the strikers. Of the four strikers involved at the start of the campaign, just two would last the season, while two key additions would arrive over the course of the campaign.

As a quick guide the rankings are from A-E with A being Jimmy Quinn in 1994 and F being like Mark Reilly. Data includes Carling Cup & FA Cup Games and is taken from the Reading OS.

The midseason report card can be viewed here

If you missed the defenders review go here and for the midfielders, click here

Now one of our longest serving players, Noel Hunt was an integral part of our late season push up the table and finished the campaign our second highest goalscorer with eight. Of those eight goals, so many were crucial, including winners against Birmingham, Ipswich, Derby and Portsmouth as well as goals at Leicester and West Ham that were deeply satisfying to the travelling fans.

However, Hunt did struggle early in the season, managing just three goals and one assist in an injury hit end of 2011. The arrival of Jason Roberts helped Hunt turn the corner and the Irishman began to show the form he'd demonstrated alongside Kevin Doyle and Shane Long, with the Hunt contributing 11 goals or assists in just 21 games as we stormed to the title.

His workrate, enthusiasm and commitment can never be questioned but nagging doubts over injuries remain and it'll be interesting to see how he copes in the top flight. Hunt has certainly earned his chance though and it's a genuine nice story for one of football's good guys. 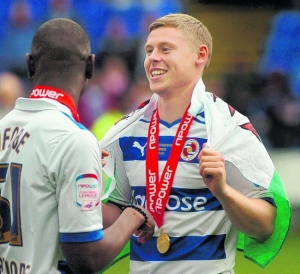 While Hunt had a terrific end of season the opposite can be said of Simon Church, who went from being our top goalscorer when we wrote the mid-season report card, to starting only four league games in the second half of the campaign.

I posed the question earlier in the season whether we were in danger of writing off Church too soon but his form over the closing months has done little to suggest a yes on that one. While Jason Roberts' ability and impact can't be questioned, Church will have to wonder how he's dropped down to fourth choice in the pecking order and how he's going to win a regular place in a Premier League side next season.

The Welsh international scored four goals in a four game spell in the early winter but three further goals across 29 games isn't good enough and with Reading looking to strengthen, Church could well find himself sold or sent out on loan to try and find his goalscoring touch.

On the positive side, Church did score a tremendous winner in the game up at Leeds, while his two at home to West Ham were equally satisfying to watch. There's clearly potential there, but whether he'll realise it at Reading remains to be seen.

Putting it quite simply, without Adam Le Fondre's goals, Reading would not be a Premier League team right now. The 2011/12 season was quite a journey for Le Fondre who started the year at Rotherham before a £250,000 move to Reading at the end of the transfer window saw him take over the number 9 shirt vacated by Shane Long. Le Fondre managed to chip in a few goals before the new year but wasn't entirely consistent and lost his place when Jason Roberts arrived in January.

Le Fondre would be at his most effective after he was dropped, with several vital goals off the bench producing wins against Watford, Millwall, Leeds and Southampton. In particular, his brace against Leeds and his double a few days later against Southampton will go down in Royals folklore and it really is impossible to understate his impact in our run-in.

Alfie himself won't be happy being a super-sub forever but going from League Two to the Premier League in just 12 months is a big jump for the former Rochdale striker. One thing that we do know though is that given a chance in front of goal, this guy can score at any level. 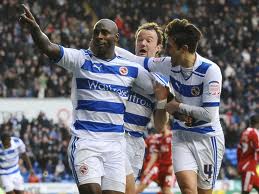 Le Fondre got some crucial goals but it was the overall play of Jason Roberts that turned us from play-off contenders to Champions. Written off by some as past it or another Shaun Goater or Les Ferdinand, Roberts instead brought goals, power and experience to the side and helped bring out the best of those around him.

The host of the BBC's 606 started his time at the club with a goal on his debut and followed that up with five more, as well as five assists as Reading lost just one game that Roberts started in.

The only sour note of his time came with a red card in the final home game of the season against Crystal Palace that now rules Roberts out of our first two home fixtures next season.

While questions remain about how well Roberts will cope leading the line at a higher level next season, there can be no question that he was the key catalyst to this season's success and has earned the chance to prove the critics wrong again next year.

This season couldn't have got off to a better start for 'The Beast' who scored two stunning goals off the bench in our first game of the season against Millwall to steal a point. With Shane Long gone and a full pre-season under his belt it was all set up for Manset to prove he could perform at Championship level and add his name to the bargain pile alongside Quinn, Kitson, Doyle and Long himself.

Sadly Manset never really took his chance, and although he scored one further key goal at Bristol City, his season overall was pretty abismal and it was no shock to see him leave at the end of January. What was surprising was that Manset went to China to play alongside Nicholas Anelka at Shanghai Shenua. Sadly Manset never really performed in China either and has managed just a single goal in eight games.

While Manset has shown moments of brilliance in his 12 months at the Madejski the questions about his fitness and stamina have never gone away and he doesn't seem to fit any particular mould of striker. He's not a Long/Doyle that's going to run the channels and burst in and he's not a fox in the box that'll nab you goals like Le Fondre. He's not even a hassling type like Church and it's extremely difficult to see him having any minutes on the pitch in the Premier League next season. A season-long loan or permanent departure seems likely for Manset but I hope he can one day work out those fitness problems and go onto better things.

Afobe arrived from Arsenal on loan to cover Jason Roberts who had picked up a slight knock in the 3-1 defeat at Peterborough. Quick and strong, Afobe received glowing endorsements from Arsenal teammates Robin Van Persie and Jack Wilshere as well as fans of Huddersfield where he'd spent the previous year on loan.

In the end Afobe only made three appearances but he showed he's got the physical and technical attributes to make it somewhere down the road. He was a constant part of the squad down the run-in and while I don't think I can grade him on a handful of minutes, he deserves recognition for being part of the Championship winning squad.

So that is that is that. We've now rated and analysied the performance of every player from this Championship winning year and now all that remains is to look at a few of the most memorable games, which we'll be doing later this week. In the meantime please give us your thoughts below, send us a tweet to @thetilehurstend or visit us on Facebook