Well it's been a while, but finally there's been a bit of solid footballing news coming out of the Madejski Stadium, with two signings and the launch of the strips for 2012/13. The first of those signings to be confirmed was that of Danny Guthrie, who joins from Newcastle on a 'Bosman' free transfer on a three-year deal.

Guthrie has been through some of the biggest clubs in the country, including Manchester United, Liverpool and Newcastle, winning praise wherever he's been. However, somewhat inconsistant form and a series of unfortunate injuries have meant Guthrie has never quite cracked the top-level of the English game and we'll look at what Reading fans can expect from the 25-year-old midfielder.

Guthrie's first taste of football with a professional club came at Manchester United where he spent a couple of years in their Academy before leaving at the age of 13. Thankfully for the youngster, numerous clubs including West Brom, Wolves and Liverpool came in for him and he eventually opted to move up to Merseyside to join Liverpool's youth setup where he remained, signing pro forms in 2006.

Guthrie's first team debut would come a few months later against Reading in the League Cup, when the 19-year old would come on for Mohamed Sissoko at around the hour mark in a 4-3 win for Liverpool. A regular captain for the reserve team, the midfielder would find opportunities hard to come by in his first pro season, but would make his full debut in December 2006 against Galatasaray in the Champions League group stage, where an already qualified Liverpool lost 3-2. 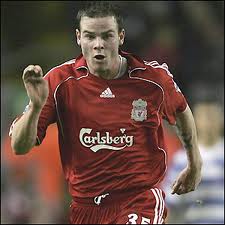 Guthrie would continue to get the odd game off the bench but was sent on loan to Southampton towards the end of the 2006/07 season and played ten games, setting up two goals as Southampton got to the Championship Play-Off Semi-Finals only to lose on penalties to Derby.

The following year Guthrie was sent out on loan again, this time to Premier League side Bolton but would have to wait until September to make his debut, where he scored in a 2-1 Carling Cup win at Fulham. With Sammy Lee sacked shortly afterwards, new boss Gary Megson made Guthrie a regular in the side, with the youngster playing in 35 games for Bolton as they narrowly survived the drop and made it into the knockout stages of the UEFA Cup, where Guthrie started in a 2-2 draw against Bayern Munich. By most accounts he did a decent job in the midfield, earning just three bookings in 25 Premier League games but one goal and just one assist in his time at the Reebok was a slight blot on an otherwise good loan spell for the 20-year-old. 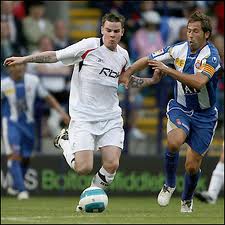 Bolton boss Megson turned down the chance to sign Guthrie in the summer, with Megson's comments in the summer hardly the most glowing you've ever read, an early hint that maybe he wouldn't be sticking around the Reebok.

"Danny did well for us. I don't think he'd been involved too much before I arrived and in his time since then I know there were times when he was disappointed when I picked a team to get a certain result. But he's got some good qualities."

Guthrie was snapped up by Newcastle for a fee of around £2.5 million pounds, with Bolton fans giving a mixed reaction, some blasting the move but others more understanding.

"I must admit, I am not that disappointed, he didn't impress me last year.

Earlier posts have also touched on the fact that he rarely provided an end product of any note, far too often he ran himself into impossible situations and delivered a ball that was useless.

he may have been our best player at various points of several matches, but lets face it, for the vast majority of last season, I could probably have also looked impressive at times if i was on the pitch."

Guthrie enjoyed a good start to life on Tyneside under Kevin Keegan, who compared Guthrie to Rob Lee and Paul Bracewell, handing him the number 8 shirt. Guthrie performed well in Newcastle's pre-season campaign and being named in the starting lineup in their Premier League opener at Old Trafford where they earned a credible draw against the defending Champions. Guthrie continued to be a regular part of the midfield but was embroiled in controversy when he hacked down Hull's Craig Fagan in the last-minute with Newcastle trailing 2-1, which you can see below.

It was a nasty, nasty tackle and Guthrie was lucky to escape further punishment but he managed more good moments than bad in his first season in the North East, scoring his first Premier League goal at Portsmouth and then adding a second later in the season from the penalty spot at Wigan. He also managed to add 5 assists in his 24 Premier League appearances but couldn't prevent Newcastle from slipping into the Championship on the final day of the season.

Guthrie stayed at the club for their second tier campaign, and flourished at that level, scoring five times and leading the team with 13 assists as Chris Hughton's side made an immediate return to the top divison.

Guthrie's luck took a turn for the worse that summer as a knee injury kept him out throughout the pre-season, and that coupled with the signing of Cheick Tiote meant that Guthrie would find first team games hard to come by, starting just 11 league games and failing to find the net all season. The low point came against West Brom in December, where Guthrie needed stretchering off after he slipped and let in West Brom for their third goal in a game that would be Hughton's last in charge.

The following season started just as badly when Guthrie injured his ankle in a pre-season game at Darlington that saw him sidelined until late September. Shortly after his return Guthrie scored a cracker at Blackburn in a Carling Cup game and from that point, a combination of injuries, suspensions and the African Cup of Nations meant that Guthrie would get an extended run in the team over the winter. He was a regular starter, scoring another awesome goal in a 5-2 defeat at Fulham and helping Newcastle keep up their challenge for a Europa League place. But with Tiote and Cabaye returning to fitness, Guthrie slowly faded from the first team picture, especially once it became clear he wouldn't agree a new deal and in June was released by the club. 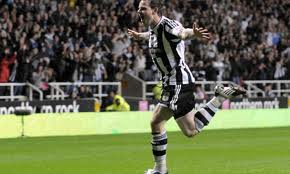 Newcastle reaction to his release was again mixed but I thought this summed up Toon based feelings quite well.

A lad who should just be hitting his peak and who had all the talent and skill and often the work-rate to become a top class Newcastle player, gave up on the challenge of beating either Tiote and Cabaye into the first team and preferred to go on the unemployment line. Not that he won’t get dozens of offers from other clubs with a fair few Premier League sides fully aware of what bargain is to be had with him.

This article wasn’t really written to criticise Guthrie as he was a good player for us, especially when he got into his stride with a run of games. It’s just a shame that after his really impressive season in the Championship that he got injured at the wrong time and never really recovered to cement a regular place and now another team will benefit from him…

His prospects of a move to another club were hardly helped in the opening weeks of the summer when news reports surfaced of his wedding turning into chaos, with police called and the national press having a bit of a field day.

Overall, Guthrie's career to date seems to be one of huge promise that for one reason or another hasn't ever quite been fulfilled. Playing for 4 teams in 4 years arguably didn't help him early on but he did seem to be getting into a rhythm for Newcastle at a lower level before injuries and the good form of those that replaced him, made his Newcastle prospects a bit bleaker. On the surface his goals to game ratio isn't that stunning, while at Premier League level, he's only just into double digits in terms of assists, not something you love to see out of a creative midfielder.

However he's someone who's clearly got a strike on him as well as someone that can make a pass from time to time. If anything he reminds me a little bit of a better, more mobile version of Brian Howard, someone that's shown his class in patches but has never really been able to keep it up over multiple seasons and at different clubs.

So where does that leave Guthrie in terms of Reading? The fact that the club has handed him a three-year deal shows that they are seemingly happy with regard to his fitness, and that they've bought more into the Guthrie from 2008-2010 rather than the one of the last couple of seasons.

It's also clear that Guthrie hasn't come here to be a squad player given that he's been happy to leave Liverpool, Bolton and Newcastle in search of a regular starting berth. I always like that in a player, it shows that he's not just happy picking up a pay cheque and actually wants to play, though you do always have to have slight concerns about how he'll react if he isn't in the starting lineup.

While he can operate on the right hand side of the midfield, Guthrie is strongest in the middle and that means that barring a switch to 4-5-1 that one of Jem Karacan and Mikle Leigertwood will be nervously looking over their shoulder this summer. Out of those two, for me it's Jem who's the most under threat as Leigertwood is more instrumental in winning the ball back and offering the strength to let us play 4-4-2. Brian has shown that when both are playing badly he's been more comfortable dropping Karacan and if I had to stick money on it I'd say the Turkish U21 will be the one to make way. Both Guthrie and Karacan are known for their high work rate and decent tackling ability but Guthrie's superior passing skills and experience at the top-level might just give him the edge, either way it's a nice dilemma to have.

However as mentioned it could be a sign that Brian wants to go back to 4-2-3-1/4-2-2-1-1 and in that case you could see Guthrie given that remit behind Jason Roberts/Pogrebnyak but it remains to be seen if Guthrie can play in the hole and provide enough of an attacking outlet.

Overall I like this move, it seems a good 'Reading' type of signing where they've picked up a guy who's not necessarily cracked it yet but has shown potential and the enthusiasm to make it at the top-level. After two seasons of injury problems and inconsistent form, Guthrie still has something to prove and at just 25 he should be coming into the best years of his career. While his goalscoring record isn't astounding and you do worry about the injuries, it seems a sensible gamble to take and the upside of the deal is huge.

So what do you think about our new midfielder? Let us know your thoughts below.

We'll have more on our third summer signing Pavel Pogrebnyak in the next couple of days, while if you missed our piece on or first summer signing Gareth McCleary, you can take a look at that here.

Also a quick word to say thank you to everyone who voted for us to win a Football Blogging Award via Twitter and Facebook. Sadly we didn't make the final short list but we appreciate everyone that took the time and effort to register a vote and to say thanks we'll be launching a competition in the next couple of weeks so stay tuned for that one.