To Change Or Not To Change? That Is The Question...

Share All sharing options for: To Change Or Not To Change? That Is The Question...

Since the season drew to a close Reading have already dipped into the transfer market three times, bringing in Gareth McCleary, Danny Guthrie and subject to any late shenanigans, Pavel Pogrebnyak. Both Pogrebnyak and Guthrie have Premier League experience while McCleary is the reigning Player of the Season at Nottingham Forest, so all three will bring something positive to the mix at the Madejski next year and give Brian McDermott even more options to choose from.

We're also highly likely to dip back into the market, with rumours of approaches for players such as Jordan Rhodes, Adrian Mariappa and even Gylfi Sigurdsson all floating about amongst numerous others. For fans of a newly promoted club this is arguably the most fun period of the season as we see household names all linked with a move to the Mad Stad, players we can all freely debate in the pub as opposed to relatively unknown quantities such as Brett Williams, or Karl Sheppard. It's not that there's anything wrong with unproven players (ahem Doyle, Long, Hislop etc) but it's a bit more fun to chat about the merits of Pogrebnyak vs Hunt compared to Sheppard vs Church....

However there's always a bit of concern whether a successful squad should be tinkered with too much, and especially when the players coming in are likely in a new wage bracket, could too many signings disrupt the team?

It's a question that's only going to be definitively answered come the season's end but what can we learn from the investment of other newly promoted sides and can there be such a thing as too much or too little change?

I've decided to take a look at the teams promoted since Reading won the Championship for the first time back in 2006, looking at the transfer activity of newly promoted clubs and how many regulars from their promotion winning sides actually remained.

To quantify a 'regular' we'll use roughly around 2/3 of their team's league games, so 30 in the Championship and 25 in the Premier League.

In terms of signings, I've counted those throughout the season, so including January and fees are taken from Soccerbase and The Transfer Market. 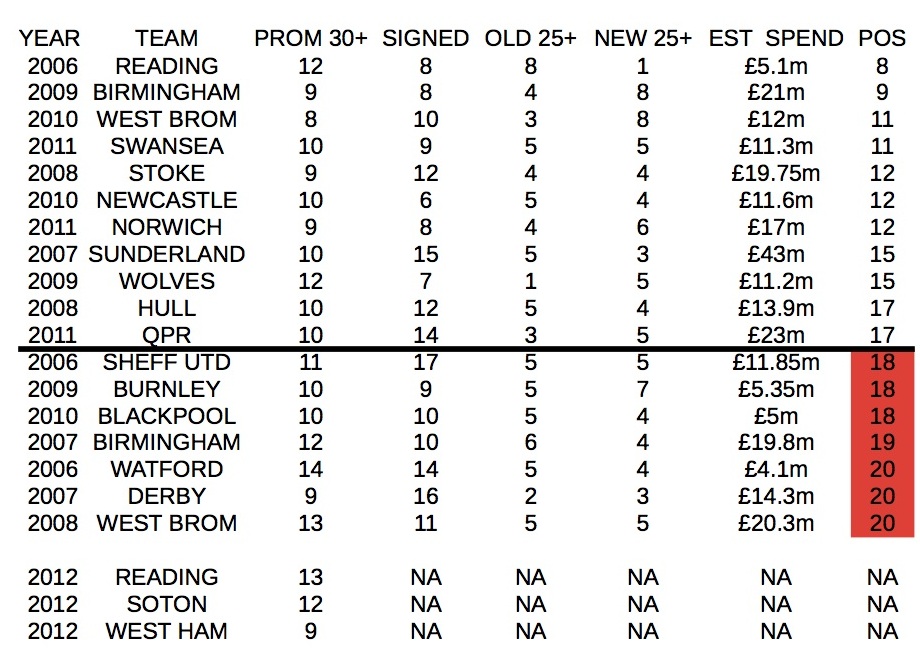 The first thing that jumps out at you is that Reading's last promotion winning side was the most successful and also the one kept most in tact, with 8 of the 12 regulars from the season before keeping their place the following season. No other club has had more than 6 regular stopovers from the previous campaign, with the average number around four.

While Reading enjoyed a great first season, it was slightly surprising to see that keeping a settled side in general seems to lead to more problems than success. Of the other 10 teams to have five or more regulars maintain their status, 60% were relegated, with another team Hull, only surviving on the final day.

On the other hand, seven teams had just four or fewer regulars keep their place the following campaign and only one of those were relegated, Derby in 2008. Similarly, fresh blood certainly seems to do more good than bad. Nine teams had five or more new players appear 25 times or more and two-thirds of them survived.

It was interesting that Swansea and Norwich, two sides who were lauded throughout last year for their consistency and keeping their promoted squads intact, both saw major changes to their list of regulars. Just half of both squad's regulars retained that status, with Norwich having six new players play more than 25 games last season, and Swansea five.

Despite being lauded for consistency, both Swansea and Norwich made significant changes

QPR, who were criticised for too many changes, had three holdovers, and saw five players break the 'regular' landmark.

I appreciate that using 'regulars' doesn't tell the whole story, as players can certainly make a big impact playing less than 25 games in a Premier League season but it seems that having a bit of a shake up can be a real help in maintaining a Premier League place, while an over reliance on the team that got you there can cause problems.

No, but it certainly helps.

Obviously transfer fees don't tell the whole story, wage spend, loans, new contracts, injuries etc all can play a big role but those teams that were relegated spent an average of just over £11.5 million. In contrast, teams that survived spent nearly a third more, with an average of £17.1 million. Although it's worth noting that figure is inflated somewhat by Sunderland's £43 million spending spree in 2007/08, without them it drops to £14.6m.

In terms of the numbers of players teams have brought in, more than half of the teams above signed at least 10 players between June and February, with the most being the 17 signed by Neil Warnock for Sheffield United in the 2006/07 transfer windows. The fewest was just six, added by Newcastle after winning promotion in 2010, with the average number around 10.

It seems that less can often be more though, as that of the seven teams to keep signings in single figures, six survived the following season.

Can recruitment be done on the cheap? Well yes it can, Reading spent around £5 million and finished higher than any other promoted side when they came 8th in 2007. However, given that the team that went up had just achieved a record points total the year before, perhaps that's not surprising!

Crucially, since Reading, no team has managed to survive spending less than £11.2 million.

It's OK Jon, if you don't score I've also got Webber, Hulse, Akinbiyi, Kabba, Kazim-Richards, Nade and Shelton in the squad.

So what's the recipe for survival?

In short, there isn't one but the above have shown that there are trends that help you stay up.

Spending does play an important part, the stats show that it's very difficult to survive unless you're prepared to splash out £10+ million million in transfer fees.

Being overly loyal also seems to cost you, with teams that kept too many of their regulars from the previous season more likely to face the drop back down to the Championship. That's not to say that too much change is a good thing, as those that recruited 10 or more players were more likely to be relegated.

Reading will go into next season having 13 players to have featured in over 30 of their league games last year, a figure higher than the last time they were promoted and the second highest of any promoted team of the last six years. If history is anything to go by than we'll only see half of that number, if that, repeat the trick during our first year back in the Premier League. We've also never seen a team spend less than £4 million during a Premier League season so we'll almost certainly see quite a few more in through the door in the weeks to come.

The trick for Brian McDermott will be trying to get that delicate balance of spending and player turnover exactly right. Thankfully if Brian has shown us anything in the past three years it's that building a team and keeping it happy is one thing he has little problem in doing.