Reading squander a four goal lead at home to Arsenal as the Gunners progress to the Quarter Finals of the Capital One Cup after a pulsating match at the Madejski Stadium.

Share All sharing options for: Reading 5-7 Arsenal (AET) - Halloween Thriller as Gunners fight back from the dead

They said there would be goals...

Reading's match against Arsenal was always going to be a high-scoring one, judging by the 6 goals we witnessed on Saturday against Fulham. But if anyone foresaw the events which unfolded tonight on the Madejski Stadium pitch then they had some spookily unlikely predictions come true. Brian McDermott made six changes to the side which "only" saw six goals last time out - the main ones being Fulham substitute scorers McCleary and Robson-Kanu come in on the flanks for McAnuff and Kebe. Federici, Gunter, Morrison and Hunt also came into the side.

The first 40 minutes, perhaps more so than the other 80 (from a Reading perspective anyway), were the most thrilling of the lot. As is customary, the Royals started at a high tempo and looked to ensure that Arsenal couldn't get their slick passing game going. And it worked wonders. No, it worked miracles. Noel Hunt received the ball in-field and laid out wide to Hal Robson-Kanu, who delivered a devilish cross into the path of Jason Roberts who made no mistake from six yards out. Five minutes later, it was two, and another cross turned in - this time by the comically unlucky Laurent Koscielny. McCleary and Gunter combined well on the right hand-side and another drilled centre was turned into his own net by the Arsenal centre-back.

Two-nil, batten down the hatches, right? Wrong. The Royals were rampant, and perhaps nobody was in the mood more than Mikele Leigertwood. Fresh off the birth of his child, and a screamer against Fulham three days ago, he received the ball about 20 yards out. The crowd screamed for him to pile another one in, and he duly obliged. Martinez in the Arsenal goal made a complete hash of the shot, however, and it dribbled into the back of the Gunners' net. The game settled down somewhat after this pulsating first twenty minutes, but Arsenal still couldn't fashion any great chances of note. It was the Royals, unbelievably, who would extend their already mind-numbing lead. A cross from McCleary, a giant leap from Noel Hunt, a header in off the post to send Reading into a four goal lead. Against Arsenal. After 37 minutes. 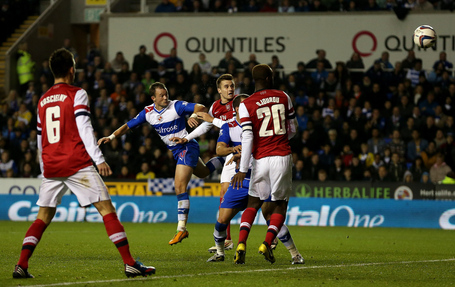 A key word of Brian McDermott's vocabulary in the past few weeks has been identity, and it seemed the Royals had found theirs. Arsenal, meanwhile, looked exactly as they were - a team of reserves who expected to turn up and win, and had no real desire or need to show Arsene Wenger why they should be in the first-team. But as the Gunners fans screamed "we want our Arsenal back", they got a hint of the potential in their side, and the ever-present danger of pace against the Reading defence. Theo Walcott admittedly is pacier than pretty much everyone else in the Premier League, but a through ball from Arshavin caught Gorkss out of position after a weak header, and Walcott nipped in between Shorey and Gunter to dribble through and chip past Federici. Did half-time come at the wrong time for Reading? Possibly, as that goal was pretty much the last action of the first half, and reminded both Arsenal and the Royals that there were, contrary to all we had seen prior, two teams on the pitch.

And, of course, the levee had been set up. The challenge was laid down to Arsenal to break it, as wave upon wave of attack came from the Gunners. Much like Saturday's performance against Fulham, Reading went back into their shell and couldn't create anything in the second period as the gameplan changed to "contain". And for all their attacking flair and movement, it took a corner to grab that confidence-boosting second goal. Olivier Giroud ghosted in to nod past Federici from Theo Walcott's corner. If the Royals thought the game was dead and buried at 4-0, it was most certainly alive now. 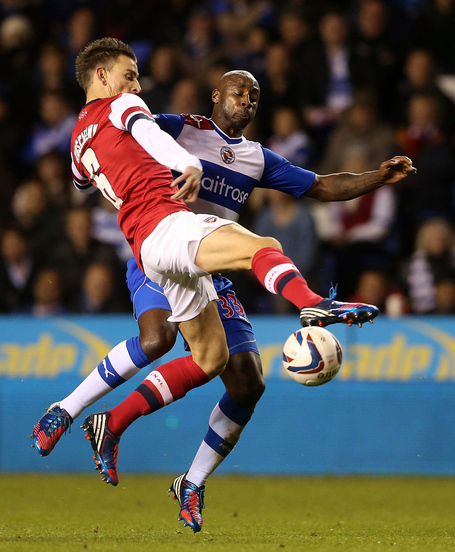 The chances kept coming but the Royals held firm. Serge Gnabry and Thomas Heisfeld drilled shots which went just wide of the post. Giroud forced two excellent stops from Federici as the Aussie keeper tried to stake his claim for a place in the side. But again, it was a corner which undid the Royals' resolute defence. Laurent Koscielny, who had already netted at the wrong end in the first half, this time popped up to nod into the same net he found earlier. 89 minutes on the clock. Surely not.

Four minutes of bedlam. Well, five. I'll get onto that shortly. Reading broke up the other end and Roberts was cynically brought down just outside the box by Koscielny, who was already on a yellow card. Kevin Friend waved away Mikele Leigertwood's plea for a second yellow, and perhaps Arsenal knew luck was on their side. Roberts, dead on his feet, was sacrificed for Simon Church as the clock wound down to the zero hour. Arsenal gained a throw in, deep in Reading territory, which was taken after a delay getting the ball back to the pitch from the stands. And sure enough, it proved deadly. Theo Walcott latched on to Marouane Chamakh's knock-down and slotted past Federici despite the attempts of Nicky Shorey to keep it out. The game was dead and buried after 37 minutes, but with the last kick of the 90, Arsenal had risen from their tomb. 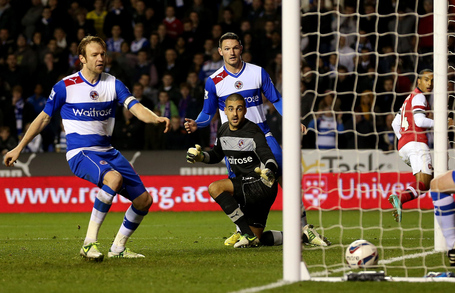 Five minutes and three seconds. The time elapsed when Theo Walcott drilled in to tie the match. Four minutes had been added on. Were Reading the victim of some generous refereeing for Arsenal? Hard to say. A substitution which would have added 30 seconds, the time taken to deliver the ball back to the touch-line for the throw-in perhaps another 15, but there's no way that Mr Friend could have found that extra twenty seconds to allow Arsenal in for the equaliser. Add to that the fact that Laurent Koscielny should definitely have seen red and it looks as though Reading were fighting the officials as well as the suddenly spirited Gunners team.

Into extra-time, and most Reading fans felt this was only going one way. The door, if it wasn't already creaking, had been axed down and now the hordes were streaming in. It was Chamakh who struck a killer blow, receiving the ball from Arshavin and smashing past Federici from 20 yards. But Reading showed a little of that never-say-die attitude which had served them so well in the past 12 months. Pavel Pogrebnyak headed past Martinez from another Gunter cross, and the game was tied again, at 5-5. 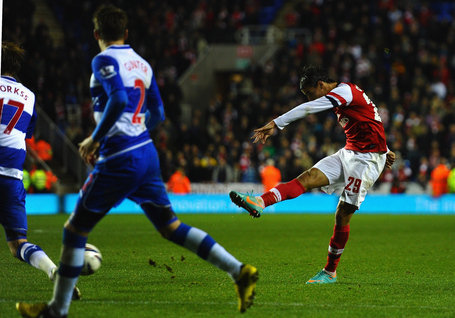 As had been the case for 40 minutes of the second half, Reading were now holding on for dear life. But the class of Arsenal, and the outstanding Walcott, told. He latched onto the ball in the Royals box and scored his third injury-time goal of the match to finally break the Reading resistance. There was just enough time, amazingly, for Marouane Chamakh, to grab a goal which made the game look even more ridiculous as he pounced on a weary Gunter's mistake and coolly chipped over the stranded Federici. 7-5 it finished, but I'm sure given 5 minutes more the scoreline would probably have been made yet more astounding.

What to say? How to analyse this game? It's the second in three days at the Mad Stad where we've dominated the first half, looked comfortable, then come out in the second with an air of panic and general incompetence. To squander a four-goal lead is simply atrocious, even against an Arsenal side which, though rotated, still contained the likes of Djourou, Walcott and Arshavin. It was their speed which told in the end, and the simple fact is that Reading don't like the ball being run at them at pace. Gorkss made a dreadful mistake for the first goal and was caught horribly out of position, whilst Gunter contributed two goals going forward but looked troubled in defence.

The lack of options on the bench was also part of the downfall. McDermott said earlier in the season he was happy with the squad depth, but now with injuries and alleged tension behind the scenes, it left Reading weak in the middle of the park. Danny Guthrie wasn't on the bench for the second game running, and with Jay Tabb and Mikele Leigertwood playing two games in 4 days, especially one of this nature, one has to wonder if he'll be involved in Sunday's crucial match against QPR. Jem Karacan's injury isn't helping this cause either but in a league where midfield dominance is so important, McDermott's options currently look thin.

A frustrating night for Reading fans. 4-0 up and cruising against Arsenal. And I mean cruising - Walcott's goal just before half time was scarcely deserved. But yet again Reading have failed to see out a match and our second half performances recently have been woeful. With the atmosphere sure to be a pressure cooker at Loftus Road on Sunday, Reading need to recover quickly and step up their game - otherwise after this Hallowe'en nightmare, one fears for more fireworks on the night before Bonfire Night.