Another dismal performance from the Royals makes it 5 losses in a row in the Premier League, as Martin O'Neill's struggling Sunderland cruised to a 3-0 win over Reading.

If you can stomach this match report, then read on, because it's not pretty. Five games in a row that Reading have lost now, and they never looked like grabbing a point from the Stadium of Light. The matchday squad was one of the weakest in recent memory, even in the Championship days. Hal Robson-Kanu, Jason Roberts, Sean Morrison and Pavel Pogrebnyak all missed out through injury, whilst Danny Guthrie refused to travel with the squad after finding out he would not be starting this evening. Pearce came in for Morrison, Hunt for Roberts and McCleary for Robson-Kanu; Dominic Samuel and Jordan Obita were named on the bench along with Brynjar Gunnarsson.

And the start we all dreaded, but somehow expected. It took just 150 seconds for Sunderland to break the deadlock, as a corner from Adam Johnson wasn't cleared and James McClean slammed in a shot from 18 yards to send the home fans into celebration. The Royals were shell-shocked, and Martin O'Neill's high-energy pressing ensured Reading's Championship quality midfield couldn't string any passes together before they turned the ball over. It was all Sunderland, and Seb Larsson almost doubled their lead with a curling effort which Federici did well to palm wide. Stephane Sessegnon was getting space all the time and he fired in another shot at goal which the Aussie keeper again dealt with well. 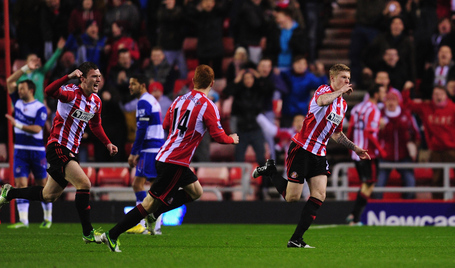 But the goal had to come, and the returning Steven Fletcher made an instant impact. The impressive Danny Rose made space on the left and slammed the ball into the box - Fletcher cheekily backheeled the ball towards goal and the net bustled again. 2-0 and another long evening for the Royals. Reading did have a few chances on goal but they were all from long range and didn't trouble Simon Mignolet in the Black Cats goal. Same old, same old.

The second half actually started pretty well for Reading, as Adam Le Fondre slid Noel Hunt in but, in a sudden switch of code, he fired a kick Jonny Wilkinson would have been proud of when 12 yards out. Nicky Shorey had caused minor problems with his set-pieces all night, and it was he who came closest to breaking the deadlock with a 20-yard free-kick which Mignolet saved in Federici camera-style fashion. 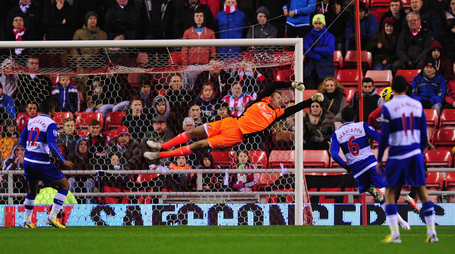 But it was soon normal service resumed - Stephane Sessegnon's pace had caused problems all evening and a quick break saw McClean in acres of space. His shot into the corner was stopped well by Federici. Another Sessegnon break saw him release Craig Gardner whose 20-yarder again pinged its way into the Reading keeper's gloves.

Late in the second half, Reading actually looked quite dangerous. Shorey, again Reading's stand-out outfield player, crossed into the box and Le Fondre's flick went about 6 yards wide. Then a Shorey corner found Noel Hunt's head, which finally forced Mignolet into a good stop. But those counter-attacks had to break the banks eventually, and it was that man Sessegnon who finally put the game to bed in injury time. He outmuscled Mariappa, took the ball round Federici and coolly slotted to put the nail in the coffin. McClean even had a chance to make it 4-0 with the last kick of the match, but it was straight at a busy Federici. Three goals to nil it finished, and you can't say it was anything less than the Royals deserved. 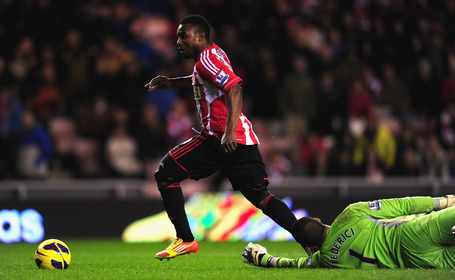 Danny Guthrie's refusal to travel after being named on the bench seems to have taken the focus away from what was another horrendous performance from Reading. A word on that first though. There are two sides to every story and Guthrie clearly feels he could do a better job than Leigertwood and Tabb in the middle of the park right now. But refusing to be in the squad gives up that chance to show his ability, and Brian McDermott said post-match he would have given him a go this evening. He's already been left out for four weeks after a previous altercation with McDermott earlier in the season, so another episode means his Reading career is hanging by a thread, if the cord hasn't already been cut. It's shocking behaviour from a professional footballer, and a real kick in the teeth for Reading fans who pay their hard-earned week-in week-out, but then it epitomises all that's wrong with the modern game these days.

If Southampton on Saturday was poor, this was absolutely woeful. Just like that game at the St Mary's, our best chances came from set pieces, as the tactical hoofball we've come to expect caused a leaky Sunderland defence no trouble. The midfield won nothing, the attack won nothing and the defence actually dealt quite well with a clinical Sunderland who took their chances. The strength in depth of the squad was glaring, as Jordan Obita and Dominic Samuel were forcibly named on the bench. Even Brynjar Gunnarsson, who has been training the U18s this season, got a place on the plane up to Newcastle.

Sadly it's Arsenal and Man City up next for Reading before two home games against Swansea and West Ham, which already in December are must-win games for the Royals. How much longer will McDermott get? Will he be in place to make those January signings everyone is crying out for? Is the season over already? As ever, you can leave your thoughts below.