6 losses in a row now in the Premier League, and Reading's survival chances look ever slimmer. Yet another goalfest at the Mad Stad saw them ship 5 to Arsene Wenger's Arsenal in another humiliating defeat.

First up, was anyone expecting us to get anything from this game? Five losses on the bounce and now an Arsenal side visited that were out for revenge after their own season had been derailed further by Phil Parkinson's Bradford City. Three changes from last Tuesday's match against Sunderland - Kaspars Gorkss in for Alex Pearce, Pavel Pogrebnyak for Adam Le Fondre and, most promisingly, Jimmy Kebe returned from injury to replace an unlucky Garath McCleary.

From the go, it was all hands to the pump. This looked like a training match for Arsenal, who were spreading the ball wide and playing the ball in and around the Reading third like a keep-ball session. But it was actually Reading who had the best chance to take the lead. Some good play on the right wing saw Pavel Pogrebnyak released into the Arsenal box - his centre was somehow skewed wide by McAnuff when it looked a tap-in from 6 yards. And the Royals would regret that miss just five minutes later as Kieran Gibbs hit the byline and crossed for Lukas Podolski to slam in from 6 yards. Some more pitiful marking from Reading and yet another easy goal conceded. 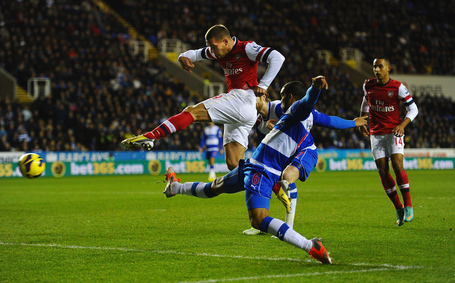 Podolski had a chance to double the lead but a good save from Federici kept the scores down, for a few minutes anyway. The German international was being allowed the freedom of the A33 relief road on the left wing and it was no surprise when he crossed from the left wing for Santi Cazorla to head into the Reading net for 2-0. Two minutes later and it was game over. Podolski yet again found himself totally free on the left wing, he crossed deep to Alex Oxlade-Chamberlain who squared for the diminutive Spaniard to get his second of the game. Boos rang out at the Mad Stad as the ineptitude of this Reading defence was all too easily being highlighted.

After half-time it seemed like just a question of how many Arsenal could notch up. It was 4-0 on the hour mark - Podolski found Santi Cazorla again who just had to tap into an open net. 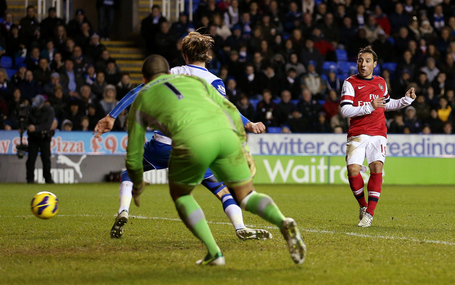 Cazorla becomes the third Spaniard to hit a Premier League hat-trick after Fernando Torres and Jordi Gomez - Gomez, another attacking midfielder, hit his own hat-trick against... Reading. Which tells you something about how much space those deep forwards find between the Royals lines.

At 4-0 it looked game over (as if it didn't before that) but somehow Reading fashioned two goals to at least give the Reading faithful some hope. The change to 4-5-1, with Tabb behind Le Fondre and Robson-Kanu out on the wing, helped fashion the chance. Tabb picked up on a slip from Jack Wilshere to play through Adam Le Fondre, who rounded Wojciech Szczesny to at least grab a consolation. But then Robson-Kanu found Kebe who slammed into the net from 15 yards to really get the headline-makers hoping for another comeback. 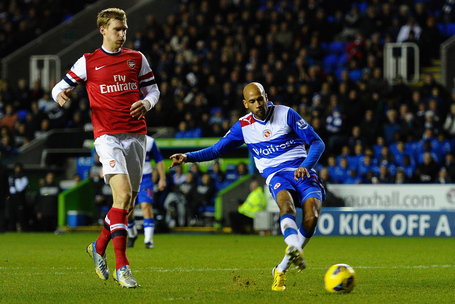 The "4-0 and you ____ it up" chants rang out from the Reading fans, just as the Gunners faithful had sung as soon as kick-off came at 8pm. Theo Walcott was to have the final say, as he slammed in left-footed from 12 yards to finally extinguish any faint hopes Reading had of a famous comeback. And it finished 5-2, which at half-time looked a very remote sight indeed.

Another inept performance from Reading was just what we expected to be honest, but the manner in which the first-half went was just inexcusable. Arsenal spread the ball around like the Reading defence were ghosts, and whenever we did somehow intercept a wayward pass, it was just to hoof the ball forward and give it straight back to the Gunners. Shaun Cummings had a particularly woeful night, as Lukas Podolski simply stayed on the left touchline and beat his man every time. All three goals in the first half came from his side and Jimmy Kebe gave him little help. Mikele Leigertwood looked slow and bumbling as we've come to expect, and the attack got little service but every time they did Noel Hunt was offside or Pavel Pogrebnyak had nobody to find behind.

A shift to 4-5-1 in the second half helped as McAnuff and Leigertwood sat deep with Tabb in the hole behind Le Fondre - and it's ALF who looks the only remote threat up top at the moment. Brian revealed post-match that Danny Guthrie was set to be on the bench last night but for a slight injury - we've heard all this before but Tim Dellor seemed intent on conspiracy but it genuinely seems the issue has been resolved. Whether he'll be starting, or on the bench, or out of the squad again this weekend against Man City is still in question. But if a shift to 4-5-1 is on the cards, we could see him return to the squad. That probably won't be enough to stop the League champions but at least it's another option.

As we come to January, and indeed the rest of the season, questions will obviously be asked. The way I see it, Reading are in a strange position now. We're not totally out of the League just yet but any investment does seem like it would have to be shrewd and not break the bank. Equally, it has to be enough to have a go at staying up, and if not, then returning to the promised land again next year. Quite sad to be talking about this already but the facts are we're adrift at the bottom of the table, and it doesn't look like that will change any time soon.