After the last-minute heartbreak at the Etihad, it was another pleasing defensive performance from the Royals, but they couldn't land a killer blow to grab a first win in over a month against Swansea City.

Well, at least it wasn't eight defeats on the bounce. Boxing Day has, in the last few years, been a good time for Reading to play as we haven't lost on the 26th of December since 2003. Whilst the defensive performance was admirable in coping with a fluent, if slightly ineffective Swansea City side, there simply wasn't enough in attack to net that killer goal. Brian McDermott made one change from the side which so harshly lost against Manchester City, with Danny Guthrie returning after a long time out of the team to replace the unlucky Jay Tabb.

And for the first half it was very much a similar performance to that which Arsenal gave last time at the Madejski Stadium. Swansea dominated possession in the Reading half but couldn't break through a stout Royals back line, who were content to pump the ball straight back down the Swans' throats and hope for a counter. The only problem was that Jimmy Kebe, perhaps Reading's most exciting and effective attacking outlet, was playing as a wing-back to counter the regular marauds forward from Swansea left-back Ben Davies. And it was he who created the best chance of the opening period for Swansea, as he got past Kebe and drilled a ball into the 6-yard box which Alex Pearce hacked clear. 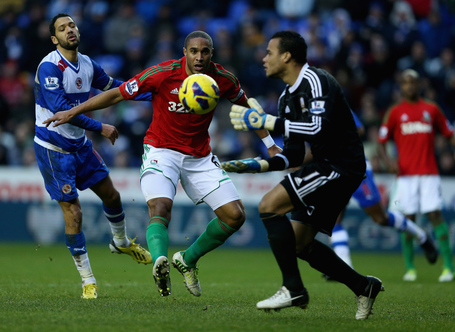 Pavel Pogrebnyak had the best chance of the first half for Reading as he was released by Kebe on a counter-attack but his touch deserted him as he entered the penalty area and the ball rolled harmlessly into Michel Vorm's gloves. Danny Guthrie had a good penalty shout turned down, too, as he was bundled over by the Swansea right-back Tiendalli but Mike Jones gave nothing. It seemed as though the Royals could have plotted their own downfall as Chris Gunter weakly chested the ball back to Adam Federici in the Reading net, allowing Spanish striker Michu to nip in, but he could only blast over from six yards.

After the break it was a very different game, as Swansea played with more direct passing, regularly trying to release Nathan Dyer in space behind the Royals' line - a tactic which worked to devastating effect at Wembley in 2011. But Reading were creating more chances of their own. Regular corners came in which forced Michel Vorm to finally warm up his hands by punching away. Federici had equally little to do in the first half, but he earned his corn in the second with two fantastic stops - first from the diminutive Dyer's diving header, then from a Ki Sung-Yeung drive from outside the box. 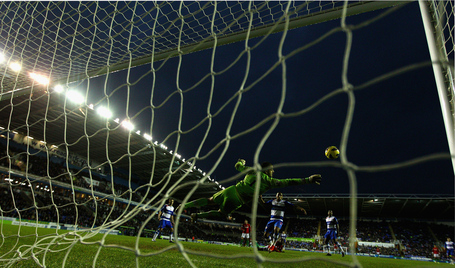 It was the introduction of Adam Le Fondre and Hal Robson-Kanu which sparked life into the Royals - and the Reading fans ironically cheered when captain Jobi McAnuff was subbed off on the hour mark. Ironically enough, McAnuff had had a decent game, and he looked disheartened to say the least when his number was held up. Bigger cheers came when Alex Pearce did what few others have achieved at the Mad Stad, and cleared the roof of the stadium with a giant punt. Enough to earn him man-of-the-match, perhaps?

That award would have fallen to ALF if he'd had more luck. First, a cross reached him before Vorm and he slotted home. But the Swansea players vehemently protested and it was ruled out, with Le Fondre instead being booked for deliberate handball. The second best chance of the match fell his way too, as a corner was again punched clear by Vorm straight to Le Fondre, who hit the crispest of volleys from 18 yards towards a keeper-less net. But Chico Flores had the presence of mind to cover for his goalkeeper and somewhat luckily, the volley headed straight towards his ponytailed noggin, and he diverted a certain goal over the bar.

Some poor Swansea play-acting spoiled what could have gone down as one of the more furiously yet fairly contested 0-0s at the Mad Stad in recent memory. Danny Guthrie twice slid in to win the ball in midfield, with he and Jem Karacan both showing heart and desire. Pavel Pogbrenyak's only real contribution was to subsequently slide in on Tiendalli, who rolled around on the ground as if he had his foot taken clean off by the big Russian. But no, thirty seconds later he was sprinting around again. Mike Jones showed composure just to show him a yellow card.

In the dying seconds Ashley Williams, he who isn't nasty or a cheat (though Robin Van Persie may beg to differ), showed his colours again by staying down after a free-kick at which precisely nobody touched him. After being ordered off the field he realised he was horribly out of position, so quickly sprinted back to his defensive line before being waved back on - and within ten seconds he headed a clearance showing no ill effect of that phantom aggressor. 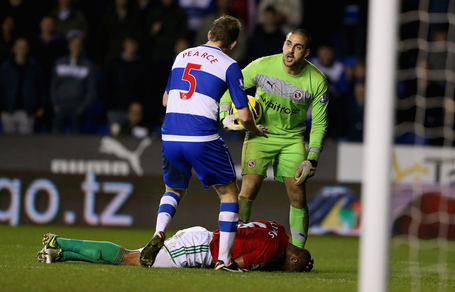 Mike Jones blew the whistle for the final time in a pulsating second half, and Reading's last chance had gone; the points had to be shared.

Another positive defensive performance from Reading saw them keep a much-needed clean sheet, which would have looked so much more impressive had they held on last Saturday at the Etihad. That's just one goal conceded in 180+ minutes for the Royals against two decent sides - a far cry from the five conceded at home to Arsenal. The shift to 4-5-1 has been instrumental in that defensive improvement, but what it gives us at the back it most certainly takes away going forward. As noted before, Jimmy Kebe in the first half was effectively playing in a 5-man defence, severely limiting any opportunities Reading had to get forward. Any time we did, it was a hoof down field or a defensive mistake which opened things up, rather than any effective possession.

As frustrating as it was though, it stifled Swansea. They may have had 65% possession in the first 45 but it was all short passes around the Reading half, with frustration or lack of opportunity leading only to long shots which didn't come anywhere near to troubling Adam Federici. The second half opened up more as both teams aimed for a more incisive style of play, but in truth it was obvious that Reading were still coming to terms with their attacking options in this formation. West Ham in three days' time might see a return to 4-4-2 but in tight games against 5-man midfields we've certainly shown that we have enough to hold on and perhaps even nick all three points.

A quick word about Lady Luck, too. Adam Le Fondre had a goal disallowed for handball after punching the ball into Michel Vorm's net, but it was almost three months ago that Demba Ba did exactly the same to earn Newcastle United a share of the points at the Mad Stad. Danny Guthrie could have been awarded a penalty too - the decisions just don't seem to be going Reading's way at the moment. But dwelling on the negatives would spoil a good performance. If it were a boxing match, we'd perhaps have shaded it on points - but sadly knockout is the only way to get 3 points in football, and Reading didn't quite have enough to deliver that killer blow.