Pearce, Gorkss and Mariappa: The Battle To Be The First Choice Pairing In The Reading FC Defence

Share All sharing options for: Pearce, Gorkss and Mariappa: The Battle To Be The First Choice Pairing In The Reading FC Defence

So, the Adrian Mariappa deal is pretty much done. A good acquisition, one of the best defenders outside the Premier League, and not all that expensive. The question is, will he join the Royals as a benchwarmer or as a first team starter?

Below the jump, I'll be having a look at the potential first choice centre-back pairings that Brian McDermott has available to him, and which would be the best to keep out of the relegation zone next season.

Before we begin, let's have a few basic stats.

Gorkss undoubtedly has the most experience from the three proven centre-backs we currently have, as Latvia captain, promoted twice and proven quality over the years.

Pearce is an academy product who has had loan spells and proven himself at Reading for the past few years, first making an impact under Steve Coppell.

Adrian Mariappa, a Watford academy graduate, is proven at Championship level and has had rave reviews for performances over the season. Three good CBs. But which pairing would be best?

Mariappa and Pearce would be the youngest first choice combination we have available. Whilst harsh on Gorkss, who would drop to the bench, on paper it looks like it could work. Mariappa has some pace about him, whilst Pearce is stronger in the air. It's similar to the Pique/Puyol, Ferdinand/Vidic, Luiz/Terry style pairings we've come accustomed to at the top level for years now. Mobility and solidity being paired up with each other.

The question is, would the relative inexperience of the pairing (and the 'keeper) at this level mean that the pairing is actually weaker than it looks on paper? I'm not saying that they couldn't do it, but looking back to the few games with Pearce/Khumalo last season and you could see the same happening if Pearce was paired up with Mariappa. It could work, though. 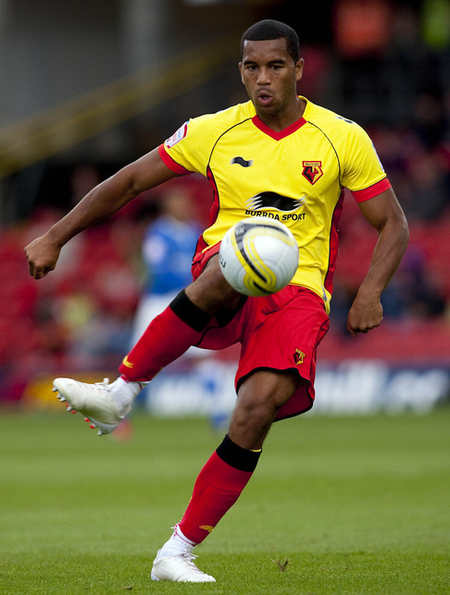 Similar to the Mariappa/Pearce combination, but with the experience of Gorkss thrown in. Gorkss is a similar type of defender to Pearce so there's not all that much more to add to the previous paragraph, other than the fact that Gorkss is very experienced at International level makes this pairing more likely than the younger combination.

The phrase 'if it ain't broke, don't fix it' comes to mind for this final combination. Last season Pearce and Gorkss formed a formidable wall in front of Adam Federici and didn't look particularly weak. Sure, they're not the fastest defenders, but the way that the Royals played last season (and will probably continue to play like this coming season) meant that the pace of the opposition forwards rarely bothered them; with the two defensive midfielders in front of them meaning that the opposition had to resort to going out wide, and getting balls into the box, which is something Pearce and Gorkss are very capable of dealing with. If we continue playing the way we did last season, I don't see why these two should stop playing together.

Obviously, we don't have just three centre-backs at the club. We have Ian Harte who played at centre back for Carlisle before joining the Royals, and the youngsters Sean Morrison and Michael Hector have earned rave reviews for their performances in the lower leagues. However, Harte isn't the best in the air and certainly doesn't have the legs he used to, whilst Morrison and Hector are both unproven even at Championship level. That doesn't mean McDermott doesn't see them in his plans for this season. Lawrie Sanchez described Hector as a 'young Rio Ferdinand', afterall. You can't keep that under wraps for too long.

So, what do you think? Which would be the best pairing? Should Hector, Morrison or Harte get given a chance at centre back at some point this season? Leave your comments below.