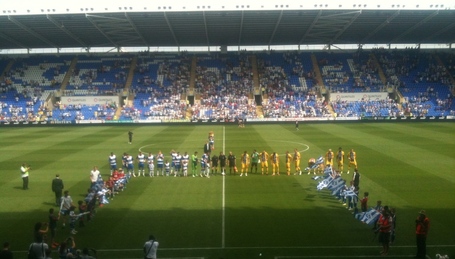 One week until the second Premier League era of Reading's existence... The Mad Stad will certainly be a lot more packed next Saturday than it was today for the visit of Palace, but those who did go were treated to a classy, confident performance from McDermott's men in their last match before Stoke come to town. Brian fielded a side which will likely be similar to that which starts against the Potters - Chris Gunter made his first appearance in a Reading shirt replacing Shaun Cummings who was ill, whilst Hal Robson-Kanu came in for Jobi McAnuff who was rested today.

The first half was a mixed bag from Reading, who started brightly but couldn't fashion any chances of note. A cross from Robson-Kanu on the left found its way to Adam Le Fondre on the right corner of the box, but his volley went sailing over the bar. The Royals were playing the ball quickly across the field from flank to flank in an attempt to find space behind the full-backs, and this almost came to fruition as Le Fondre then drilled over from a tight angle after good wing work from Garath McCleary. But it was Palace who came closest to opening the scoring in the first half-hour as a cross from the right wing found its way to an unmarked Aaron Martin in the box, who couldn't keep his header down as Adam Federici watched it fly over the bar.

Danny Guthrie, the free transfer signing from Newcastle, was running the show in the middle as his consummate passing was finding players in space constantly - one more ball from him found McCleary out wide again, whose cross evaded both Pavel Pogrebnyak and Le Fondre in the box. As the first half drew to a close, Reading had two great chances to finally take the lead. First Guthrie released Pogrebnyak with a delightful chipped through ball, but the Russian couldn't keep his effort down as his lob beat not only Julian Speroni but also the crossbar. Then Pog turned provider as his pullback from inside the box found Guthrie, whose left-footed effort from 12 yards was closed down. Nil-nil at half time, but the Royals had stepped it up in the latter stages.

It didn't come as a surprise that Reading scored very early in the second period. The wingplay had worked wonders in the first half and it only took seven minutes for the dam to finally break. Leigertwood, who had been the more defensive of the two central midfielders in the first 45, broke forward and found McCleary inside the Palace left-back Moxey. He latched on and, instead of drilling the ball into the six-yard area, intelligently pulled back for Pogrebnyak to sidefoot home from 12 yards, via the outstretched arm of Speroni. It was just rewards for the striker, who had constantly chased down defenders all afternoon. Just one minute later it was two-nil as Robson-Kanu slid the ball across the six-yard box and Le Fondre slid in from three to double the Royals' lead. Two very similar goals - wingers getting in behind and drilled crosses leading to excellent finishes.

Le Fondre had a chance to double his own tally soon after as another McCleary cross picked him out in the box, but he could only direct his header straight at Speroni. This would be he and Pog's last contribution of the game as they were replaced by Noel Hunt and Simon Church for the last twenty minutes. No more real chances for the Royals as instead the defence were finally given a decent run for their money. First Jermaine Easter exchanged passes with Wilbraham and found himself onside with only Federici to beat but the Aussie was equal to his shot. Then Zaha, rumoured to be a Reading target amongst other clubs, had a pot-shot straight at the Reading keeper who spilled but was fouled in the follow-up. Reading had been pressing the ball a lot more than last season and generally this worked, except for the few occasions when Palace managed to break the offside trap. But two-nil it finished, and the Royals will be very happy to get a win on the board before getting down to real business in seven days.

It was a solid performance from Reading, who had looked a little shaky in other friendlies, not keeping a clean sheet since that 7-0 victory over Wimbledon a month ago. But they looked comfortable against a decent Palace side - perhaps the settled nature of the squad, the home turf, and the fact that there weren't wholesale changes helped this cause. Pearce in particular showed his quality - he looked comfortable on the ball and mistimed next to no tackles. Gunter was another who impressed; his understanding with McCleary obviously comes from their time together at Forest and his overlapping runs caused no end of problems for Palace. On the other wing Harte was less willing to get forward, which often left Robson-Kanu having to take on three men on his own, but the few times he did succeed he delivered decent crosses - and obviously the one from which Le Fondre poked in.

So was this a dress rehearsal? The answer to that is yes. As noted before, Shaun Cummings missed out today through illness but Gunter put in a solid performance, so the Wales international will probably start next weekend. Another Dragon has showed Brian all pre-season why he deserves a starting berth, and Robson-Kanu, whilst not quite as effective as at Bournemouth, will surely be in the first eleven if neither McAnuff nor Jimmy Kebe make it in time. Up front is where most Royals fans are scratching their heads but you can't argue with basic stats - Pog and Alf both scored, so there should be no changes there. All in all, a solid performance and the perfect base to work off for the Stoke game, where more than just pride will be at stake.