Reading's second spell in the Premier League is just around the corner as they take on Stoke City at the Madejski on Saturday. Whilst the back five may be a bit easier to predict, the front six could change with every game as McDermott picks his side to combat the opposition. We looked at the goalkeeper and defence on Tuesday - here are our thoughts on who could be creating and finishing the chances for the Royals on Saturday and beyond.

Early on in the season, the two central midfield candidates may pick themselves. Jem Karacan has only just returned from an ankle injury he sustained at home to Leeds United last season so Danny Guthrie and Mikele Leigertwood should start in the middle of the park on Saturday. Leigertwood started 41 of Reading's 46 League matches last season, becoming a vital cog in the system which broke down opposition attacks and broke quickly up field. Guthrie made 30 appearances for the Magpies over the last two years before his free transfer to the Royals, largely being overshadowed by Cheick Tiote and Yohan Cabaye last season. But in pre-season he has shown glimpses of his quality, getting both The Tilehurst End's and the official Man Of The Match award in last week's match against Palace.

Karacan returned in the friendly against Bournemouth, and played 80 minutes against Eastleigh on Saturday, so he will certainly be around the squad on Saturday but might not have the match sharpness of Leigertwood and Guthrie yet. Jay Tabb is likely to be a squad player this year but can still do a job if needed, whilst Gunnarsson should be around but probably won't see much playing time. McAnuff might move into the middle if McDermott chooses to go 4-5-1, but I wouldn't expect to see him start anywhere other than the wing this season.

Again, injuries may decide this position early on in the season. Jimmy Kebe hasn't appeared in any Royals friendly squads for a long while. He was also carrying an injury during the latter stages of the season, only being allowed to rest once promotion had been secured against Nottingham Forest. This means Garath McCleary should start on Saturday against the Potters. He's been inconsistent in pre-season, and last week's match against Palace was a perfect example. First half, he couldn't take his man on and kept giving the ball away. But after half time he transformed, setting up the first goal with a great run and pass for Pogrebnyak to finish. If he can find the consistency he established in the second half of the season at Forest, it won't be formulaic that Kebe will come straight back in. McAnuff may get some games on the right but last season he started nearly every match on the left flank.

It's likely that captain McAnuff will start, although he missed last week's friendly against Palace with a hamstring strain he picked up away at Brighton. He's expected to recover in time for Stoke, although if he does miss out there won't be any complaints about Robson-Kanu starting. Hal has been one of Reading's best players this pre-season, scoring against both Brighton and Bournemouth and setting up Le Fondre's goal against Palace. With Reading's game likely to be based on crosses into the box, HRK should be effective in the system, with McAnuff normally preferring to cut inside onto his preferred right foot. Kebe was rarely seen on the left wing last season but McDermott might be tempted to try McCleary on the left as well. Jordan Obita looks likely to leave on loan, with Coventry City reportedly interested in his services.

This position, along with left-back, could be the most hotly contested one for the Royals this season. Jason Roberts will miss the first two games of the season after his sending off against Crystal Palace last season so the other four strikers will be looking to cement their starting roles against Stoke City and Chelsea. There's no doubt that Pogrebnyak will start most games for the Royals this season so McDermott's dilemma is who to pick with him. Adam Le Fondre seems to have the early nod, starting with the Pog against Palace last week and coming on at the same time as him against Bournemouth. ALF was Reading's top scorer last term with 12 goals and is arguably the Royals' best finisher. But there are concerns he may not have enough presence for the Premier League. Therefore, Noel Hunt might get starts in games we're less likely to dominate, such as the match at Chelsea next Tuesday.

Roberts should return as soon as he's available again, as he and Pogrebnyak are probably Reading's two best strikers on paper. Royals fans do have their concerns about whether the two might be too similar in style though. Simon Church is another player who seems set to leave the club on loan - Huddersfield Town seem to be leading a number of Championship clubs in the race to acquire him. Whether his departure might lead to another striker coming in (and there are enough rumours around!), we'll just have to wait and see.

So The Tilehurst End's prediction for our starting lineup against Stoke City is... 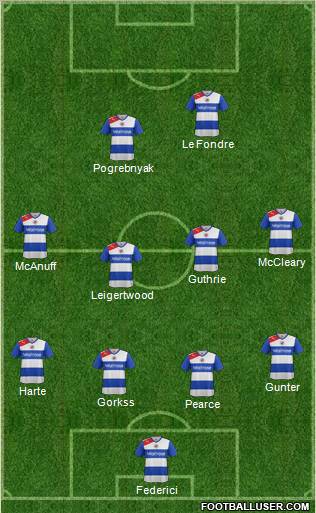 Do you agree? Let us know your thoughts for the starting XI against Stoke, Chelsea and beyond below...