After all the pre-match hype, Reading's Premier League campaign finally got underway today against Stoke City. New chairman Anton Zingarevich has said he wants to emulate the Stoke model in securing the Royals' top flight status for years to come, but it took until the 90th minute for Reading to secure the point they deserved. The Potters will settle for a point as their performance pushed the referee, and certainly not the Royals, to the limit. One change was made from last week's friendly victory against Crystal Palace, with Jobi McAnuff replacing Garath McCleary in the starting line-up.

(All photos by David Rogers/Getty Images)

If the 24,000 people in the stadium were expecting the Premier League to be an exhibition of the beautiful game, then they were sadly mistaken. Both sides struggled to maintain possession as long balls were the dish of the day served up above the Madejski Stadium pitch, with sweltering conditions certainly not helping the cause. Reading controlled the first half hour without many meaningful chances as Stoke were happy to concede fouls outside direct free-kick territory. Dean Whitehead picked up an early yellow card for repeated fouls, including one crude block of McAnuff who had attempted to run past the Stoke midfielder until an arm stopped his progress. Reading's only meaningful chance of this first period came from Kaspars Gorkss, powering a header over from Danny Guthrie's drilled corner.

A stop for a blood injury to Potters 'keeper Begovic meant Reading lost their momentum as Stoke regained their composure to attempt to show the Royals their Premier pedigree. Michael Kightly, the summer signing from Wolves, was proving a thorn in Reading's left side - he won a free kick and delivered to Jon Walters, who nodded narrowly wide from the corner of the six-yard box. Walters had a couple more attempts of his own, wildly curling over from 25 yards then volleying straight into Adam Federici's gloves. But Kightly would soon be celebrating. The ball fell to the winger just inside the penalty box and he released a weak shot which deflected off Kaspars Gorkss, flinging himself into the way of the attempt. Whether this caught Federici off-guard, we'll never know, but the result was a tame effort which somehow went straight through the Aussie's gloves at his near-post. A scarcely deserved lead for Stoke, and Kightly's almost embarrassed celebration showed what he thought of his debut goal. 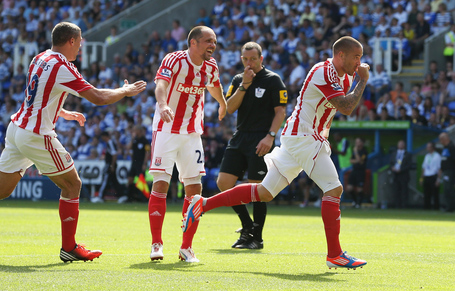 Reading's bubble had burst, and the clap-banners handed out pre-match fell silent as they found their new purpose of fanning off the heat in the stands. Le Fondre had a couple of chances to level the game before half time - a snatched shot after some messy Stoke defending went well wide of Asmir Begovic's goal, whilst a cross from Hal Robson-Kanu was too high for the striker, who one year ago was playing in League Two against Crewe Alexandra. Still, the half-time result was a dominance of possession and territory for Reading, but an all-important lead for Stoke.

The second half began in much the same vein as the first, with the two sides largely contesting an aerial battle over the Mad Stad pitch - which Stoke were always likely to win. Peter Crouch looped a header towards the back post, Etherington kept the ball in play but Kaspars Gorkss put a boot through the ball to clear the lines. Danny Guthrie was looking to come deeper and deeper for the ball, and he displayed his excellent range of passing with some sumptuous balls into space for Gunter and McAnuff, amongst others. 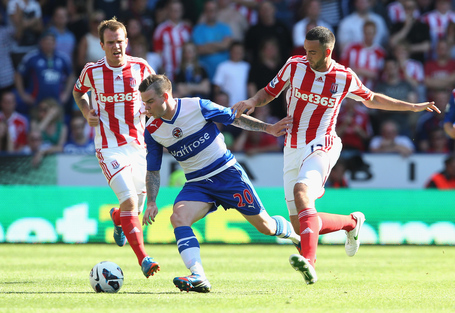 But it was the introduction of another new boy, Garath McCleary, which proved the turning point. He replaced the largely anonymous Robson-Kanu, allowing the also ineffectual McAnuff to move back to the left-wing position he made his own in the last campaign. His effect was instant - Guthrie released McCleary, who quickly laid off to Pogrebnyak on the corner of the box. The Russian had seen very little of the ball so far but with the ball at his feet, he dinked past Whitehead who scythed through the striker on the corner of the box. The Stoke midfielder somehow escaped a second yellow card as referee Kevin Friend decided to allow him one more chance. Harte's free-kick was delivered straight into the huge Stoke wall.

The second wind and belief had arrived, as just when Shorey went on "that" run against Middlesbrough six years ago, the Royals finally believed they belonged on a Premier League pitch. McCleary delivered the ball into a dangerous area in the box but Le Fondre couldn't get the ball out of his feet before Stoke defenders piled in to remedy the situation. The newly-introduced winger then released Pogrebnyak with a through ball but his shot from 12 yards was blocked. Then a corner routine which Reading have attempted many times with great success. A Harte inswinger found Pearce beyond the back post, he nodded back across goal and Pogrebnyak powered a header straight at Begovic - a foot either side and it would have been another debutant snagging a goal today.

As it was, this was Pog's last contribution as he was somewhat surprisingly substituted for Noel Hunt. But it was the other substitute who was to have the telling impact on the game. McCleary drove into the box and laid through for Hunt, whose shot was smothered by Begovic. But Whitehead, lucky to still be on the pitch, was in the right place to again cut through a Reading midfielder, leaving Friend no choice but to award a penalty and finally show the Potters man his second yellow card. Le Fondre stepped up and coolly placed the ball in the bottom right corner, past the dive of Begovic. 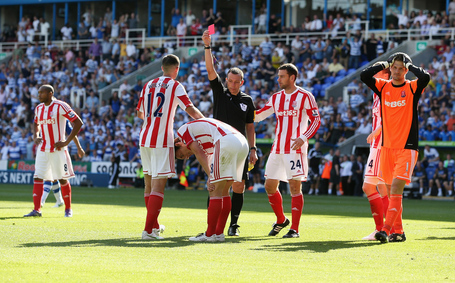 The Royals piled forward in search of an injury-time winner, something they had become so accustomed to last season. Guthrie, pulling the strings in the middle, was chopped down and some thought the script had been written for Ian Harte after four years away from the top flight. He tried to catch Begovic off guard at the far post, rather than curling over the imperious Potters wall, but his free-kick was narrowly too high. Begovic and Wilkinson both received yellow cards for time-wasting in these last few minutes as a tired Stoke tried to wind down the clock, including Rory Delap stealing a few seconds with every one of his trademark long throws. And as the final whistle blew, the points were shared - though Reading might have tried, the winner was not forthcoming.

A scrappy match to mark our third-ever top flight campaign, with Stoke intent on making the game a battle in the skies. Guthrie attempted to play the ball around on the floor, but any momentum was quickly spoiled by the Potters' constant lofted deliveries. McAnuff and Robson-Kanu were largely anonymous on the wings, but luckily one wide-man was on song to make the difference to the Royals' cause today. McCleary may have been helped by the weary Stoke legs in the last half hour, coupled with the searing heat inside the stadium, but his direct running caused no end of problems for the Potters.

A solid defensive effort too, with Reading largely coping with anything Stoke threw at them - the only meaningful shot on target Stoke had was the one which gave them the lead, unfortunately for the unlucky Federici. But the Royals never know when they're beaten, and as long as they keep going until the 90th minute in every game this season, they should avoid the drop. It may not have been the solid victory we wanted, but it was a base to build off for the challenges ahead.