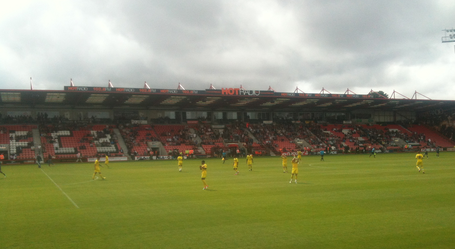 On a sunny afternoon down by the coast, Reading were aiming to get more match fitness under the belt against League One outfit Bournemouth. The game finished 2-2 and Brian McDermott played two separate teams for different periods of the match, as is customary in his pre-season plans. A good Mariappa header from Nicky Shorey’s free kick got the Royals into an early lead but the Cherries soon equalised with a set-piece of their own, Wes Thomas nodding in from a left-wing corner. The 60 minute mark saw 8 changes for the Royals, and two of the newly introduced players combined to win a penalty as Le Fondre slipped in Robson-Kanu who was tripped inside the box. Hal picked himself up to send the keeper the wrong way. But the lead slipped again as Miles Addison nodded in another cheap header from a left-wing cross. It was a good workout for Reading with the new season less than 2 weeks away – below are some thoughts on each player’s performance.

Federici: Didn’t have too many saves to make but was still on hand when it mattered. Played a few good early balls for the strikers to run on to. Clearly first-choice come 18th August.

Cummings: Solid, if unspectacular. Good defensively and seems to have made major improvements with standing tackles and bravery generally. Struggled to get forward.

Shorey: Linked well with McAnuff on the left wing and wasn’t afraid to get forward to support attacks. Delivered a peach of a free-kick for Mariappa to nod in.

Mariappa: Extremely mobile and reads the game extremely well, which makes up for his lack of height. Surprised he nodded in the goal to be honest! Switched to right-back from 60 minutes where he also impressed.

Morrison: Looked assured in possession, very much an Alex Pearce light. Won everything in the air although his positioning at times was a little suspect, sometimes too eager to challenge for the ball rather than standing off.

Leigertwood: Typical bustling performance, tried to link attack and defence, and ran with the ball more than usual. Solid when closing down opponents.

Tabb: Another with something to prove and he showed his commitment to the cause with an all-action display. Great running and tackling although lacked a little quality at times.

McCleary: A little disappointing as he often tried to take on his opponents with little success. One great turn and sprint to cross into the box showed glimpses of his potential.

McAnuff: Again, not the performance we were expecting to see. Wanted to come inside all the time and was very happy to play triangles with Shorey and Leigertwood to find space, rather than taking his man on.

Hunt: Ran the channels but the Cherries defenders were stronger and better in the air than the Irishman. No real chances or meaningful contributions.

Church: As with Hunt, saw very little of the ball and had no real influence on the game.

Harte: Solid defensively, showed again why he is the set-piece master with a couple of wicked deliveries. Will be a real challenge between him and Shorey for the starting berth this season.

Pearce & Gorkss: Continued where they left off with good tackling and marking, although they and Federici were possibly at fault for the Cherries’ second.

Guthrie: Some great passing and movement, he looked a class above. Will almost certainly start the season with Leigertwood.

Karacan: Great applause as Jemba came on after recovering from his broken ankle. Typical high-energy performance, came close to winning it at the end with a long range shot.

Robson-Kanu: Looked dangerous as he tried to take on his man, won a penalty after being released by Le Fondre and calmly slotted away. Showed why he deserves to start in two weeks.

Obita: Extremely encouraging performance from the youngster, never-say-die attitude and always willing to take the opponent on. Delivered some great crosses.

Le Fondre: One shot which flew wide, a few good touches to release fellow attackers – he showed that he could be the player with the intelligence and deft touch to unlock Premier League defences.

Pogrebnyak: Hit the post with a header, came close with a few more chances, strong in possession although he lost the ball quite often when trying to take players on.

Overall it was quite a disjointed performance from the Royals who looked out of ideas quite quickly into the match. The lack of open-play goals so far this pre-season has to be a concern for Brian McDermott as he still doesn’t seem to have found the ideal combination of strikers or wingers. I’d imagine that next week’s home friendly against Crystal Palace will give us an idea of the team to start the season but at the moment this would be my prediction.

Two more friendlies before the big day - Reading travel to the Amex to face Brighton & Hove Albion on Tuesday night before heading home to the Mad Stad to face Palace on Saturday. Royals fans will be hoping for a more convincing performance in these two games as we prepare for the Premier League. As ever, leave your thoughts on the match, the squad, or the team for Stoke below.