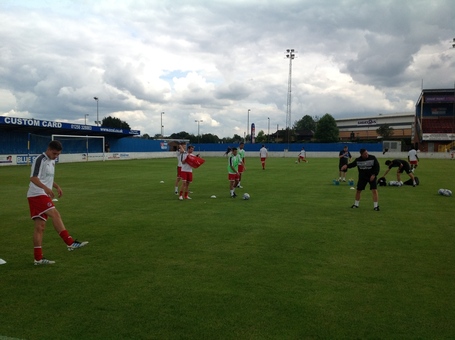 Another weekend passes without Reading playing a league game but there were still plenty of chances for several loaness to get a game, with one young striker making it three goals in two games, while one midfielder saw red.

Join us after the jump for our latest loan report.

Mills was rested for Burnley's Capital One Cup win over Plymouth but returned to face Brighton only to see his side slump to a third straight league defeat. Mills played 90 minutes at Turf Moor but there was little he could do about any of the visitor's three strikes.

Andersen had another solid game as Portsmouth were beaten at home by Oldham. The young goalkeeper was only beaten by one of his own players as Jonathan Grounds deflected a cross past a diving Andersen at his near post.

Obita made his first start for Portsmouth but also earned the first red card of his career when he was caught up in an altercation with Oldham's Connor Brown early in the second half. With the two jostling for a header in just outside the centre circle arms are flailng everywhere and while Brown certainly seems to lash out at Obita, it's unclear if Obita really went for Brown and if there was any contact it didn't look significant or deliberate. Obita saw red but the ref mistook Brown for Cliff Byrne and sent Bryne off for the visitors! With only a single camera shot it's hard to make any firm conclusions but it certainly appeared harsh and if upheld, Obita could miss the next 3 games.

Hector was ruled out of Shrewsbury's draw with Stevenage with after tweaking his knee in training. No word on an expected time of return but it doesn't appear serious at this stage.

Ugwu made it three games in two league games when he deftly chipped Doncaster 'keeper Gary Woods five minutes after coming on as a sub. He's now scored three times in two sub appearances and he's certainly making a case to be starting. Ugwu also managed a handful of minutes in the cup defeat to West Brom that saw the Premier League side progress with the help of two Shane Long goals.

MacDonald continues to have to settle for a place on the bench, named as an unused substitute in Wimbledon's 2-2 draw with Dagenham.

The Irishman also had to settle for a place on the bench, managing just eight minutes as Stanley ran out comfortable 3-0 winners at Cheltenham.

Williams managed to open his account for Woking this season with a fine 20 yard strike in a disappointing 4-1 drubbing at the hands of Braintree. Despite his goal Willims found himself relegated to the bench for yesterday's game at Mansfield, playing 25 minutes as Woking again slipped to defeat.