With just a week to go until FIFA 13 is released, and with Pro Evo released yesterday, now seems like the perfect time for me (and you, fine readers) to start guessing how our players will be rated in the new games. How will the likes of Federici, Pearce, Alfie improved? Will Church have gone down? I'll being going through the first team squad and explain how each player should be rated. Bearing in mind that the games only take into account last season for the first version of the game, I'll be taking that into consideration too.

Share All sharing options for: How I think Reading FC should be rated in 2012/2013 football games

Adam Federici, 74 - Rated around 70 in the last game, Federici deserves a bit of a bump after the season he had last season. Won the prize for best goalkeeper, kept the most clean sheets and undoubtedly our number one.

Alex McCarthy - 68 - Rated around the same this time round, I think. Loans to Ipswich and Leeds in the past couple of seasons should have him rated as a solid goalkeeper at Championship level, with him yet to prove himself at a higher level. He should have the potential to go up to a mid 70, though.

Stuart Taylor - 67 - Third choice keeper for years now, I don't see how he'll have a rating much higher than this.

Shaun Cummings - 66 - Proven himself at Championship level by now, I think. More than anything his pace ratings need to go up.

Chris Gunter - 72 - A very good full back in Championship level, with previous Premier League experience, he deserves a low-mid rating.

Alex Pearce - 73 - Our defence was our strong point last season, so expect Pearce to have a fairly solid lower-Premiership team rating.

Kaspars Gorkss - 73 - Pretty much the same as Pearce, just a bit older. Maybe a point higher or lower.

Ian Harte - 68 - Despite his set piece delivery being absolutely incredible, and his positioning being great considering his experience, his pace and mobility lets him down.

Nicky Shorey - 71 - He's been playing in the Premier League for the past season, albeit at a lower Prem team. Solid, unspectacular.

Jem Karacan - 73 - One of our key players. When he's available, he's likely to play under McDermott. Heaps of energy and determination, not afraid of the tackle, a good player.

Danny Guthrie - 75 - Whilst being a substitute at Newcastle, when played he played well. He'll be one of our best players.

Brynar Gunnarsson - 64 - Hasn't played for a while. Will barely feature.

Jay Tabb - 67 - Back up to the first choice midfielders, puts in a good shift, but he won't have a rating that puts him above solid Championship level.

Garath McCleary - 70 - Has looked very good in the first few games of the season, won Nottingham Forest POTS after half a season last season. Expect pace and trickery.

Simon Church - 65 - Still hasn't done much. Not really proven himself to be a Championship level.

Jason Roberts - 71 - Our best forward last season, he helped push us up the table. Despite his age, he'll be a good player.

Pavel Pogrebnyak - 77 - After his time at Fulham, expect him to be our best player. A real tank with a beast of a shot, if you're going to score goals as Reading you'll want to give it to him.

Given the time of this post, there have been a few images of FIFA and PES floating around. Below are two of which show Reading's ratings: 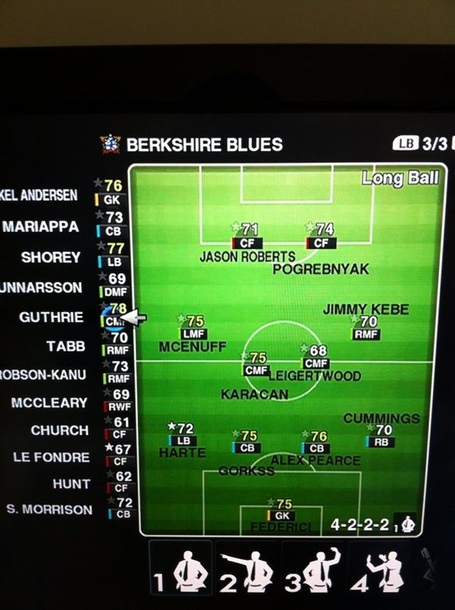 So, that's it then. What do you think of my ratings? Do you think I've been too generous, or am I being a meanie? How about the screenshots of the Royals?

Leave your comments below and get involved.