Reading battled to a thrilling 3-2 win away at Loftus Road on Wednesday evening - goals from Gorkss, Shorey and Pogrebnyak ensured the Royals will meet Arsenal in the Fourth Round.

Oh, that winning feeling... In our pre-match preview I talked about the resilience Reading showed last season, never knowing when to lie down and give up the match. Just like last season it was late goals which saw Reading through when all looked lost, in a truly belting cup tie at Loftus Road.

All images, except first and last, (c) Clive Rose/Getty Images. 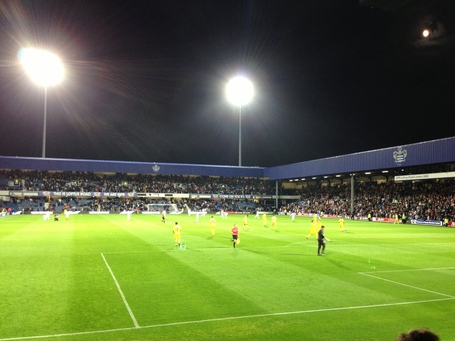 For the first 15 minutes, you would have thought it was normal service resumed for Reading, as QPR looked to dominate the play and spread the ball quickly out to the wings. Junior Hoilett was causing havoc in the Reading third, and an early cross-shot from him dribbled harmlessly wide of Alex McCarthy's goal. But in the 14th minute he was allowed the time and space to run at the Reading defence, and with no challenges forthcoming, he powered into the box and drilled low left-footed past McCarthy. The goal was no less than the early pressure from Rangers deserved.

But their lead only lasted two minutes, as Reading's danger from set-pieces was finally realised this season. Alex Pearce and Kaspars Gorkss scored their fair share of goals from corners and free-kicks last term, and it was the latter, playing at his former club, who headed the Royals back to level terms just two minutes later. Pogrebnyak was bundled over trying to control a ball forward, and referee Roger West awarded the free-kick wide on the left touchline. Nicky Shorey stepped up to remind all Reading fans of his devilish left-footed delivery, and Gorkss duly nodded past Julio Cesar at his near post. 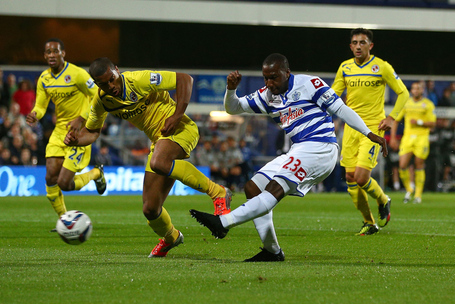 The game then settled down after the early goal action, and both teams tried to control the game through the midfield. Jimmy Kebe was exciting the Reading fans every time he got on the ball, and he cut inside to see his shot blocked by a QPR man. Then Jamie Mackie got on the end of a left-wing cross but his header was well saved by McCarthy. 1-1 it ended at the break, but the second half was to be even more thrilling.

Reading came out of the blocks all guns blazing and looked more like the side which powered its way to the League title last year. Hal Robson-Kanu was getting more into the game and a cross from the Welsh international found its way to Pavel Pogrebnyak whose shot from 12 yards was charged down. QPR broke upfield almost immediately and a deep cross from the left wing eventually found its way to Mackie at the back-post, who totally mishit his volley. The Royals could, and perhaps should, have done 2-1 up when Robson-Kanu and Dyer challenged for a ball by the by-line. They both went down, the referee waved away penalty claims, then when Hal emerged and squared for Pog to rifle home, Mr East blew up for a foul on Dyer. It looked like both players had equal claims but the referee thought otherwise.

And how it could have proved costly. Djibril Cisse had been well marshalled all game by the Reading defence but all he needed was one chance to show his class. Adrian Mariappa attempted to clear deep in his own half, the ball deflected and fell to Cisse just outside the Reading area. He took time to set himself and absolutely drove a stunner into the top corner, past the outstretched dive of McCarthy. It was a goal worthy of winning any game, and he ripped his shirt off in celebration. But Reading weren't done yet. 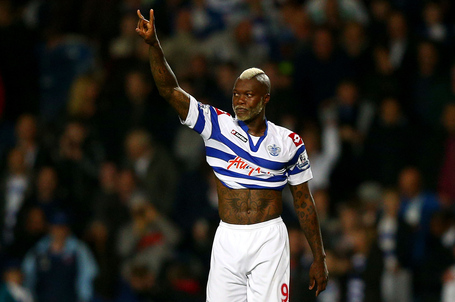 Again, the equaliser came just minutes later. Jay Tabb was upended by Esteban Granero, leaving Nicky Shorey with a chance from 25 yards against Brazil international Julio Cesar. But there was nothing the keeper could do about the returning Royal's effort, as it flew into the top corner via the bar to once again restore parity to proceedings. A stunning effort from Shorey to add to his case to be given the shirt permanently.

The momentum was now well and truly with the Royals, and Pogrebnyak was at the centre of it all. Just before Shorey's free-kick he was sent flying by Stephane Mbia but the referee gave nothing. He was to have the last laugh though. Tabb beat his man on the left wing, drilled across the 6-yard box and Robson-Kanu got the slightest of touches onto the ball. Pog readjusted and deftly backheeled the ball into the net from 6 yards, past the stunned face of Cesar in the Rangers net. A fantastic bit of skill from a player who really did deserve his goal - finally, it came. 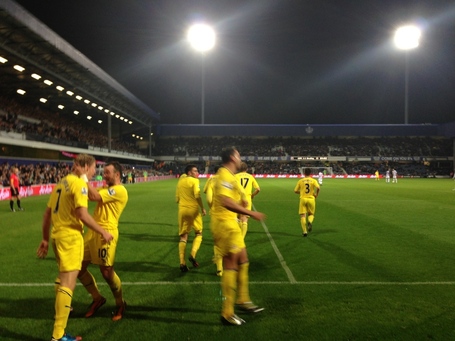 He even had time to make it 4, as he was bundled over in the area by Mbia. It looked slightly soft but there was definite pushing and manhandling so you can't blame the ref for giving the penalty. However, Julio Cesar made up for the earlier goals by choosing correctly and diving left to keep out Pog's powerful pen. Rangers piled upfield in search on an equaliser but it never materialised, and the look on the Reading players' faces was one of unbridled joy as the final whistle blew. It may not have been in the League but a win is a win, wherever and whenever they come. McDermott's men are finally coming good.

Nothing quite gets the adrenaline going like that first major win, and especially one where you come from behind to secure the victory. The never-say-die attitude which epitomised Reading last year was out in force tonight, and the joy when we went ahead was unbelievable, not only on the faces of the fans but also the players. Every player was fully committed on the pitch and knew their role both defensively and in attack - Hoilett's goal may have been avoidable but Cisse's was certainly unstoppable. But to score 3 against any Premier League opposition is fantastic news for Reading, and tonight could have been the perfect night to do so. Every man played their part tonight in a fantastic performance and important win tonight - leaving Brian McDermott a big, but pleasant, headache when deciding his team for Newcastle on Saturday.