Reading's postponed match with Sunderland probably won't be played until December because of UEFA rules that Premier League games can't be played midweek when European competition is also on.

If you take a glance at the League table, you might see that two teams have played one less match than the others. Sunderland's match with Reading, due to take place on Saturday 25th August, was postponed due to a waterlogged pitch. Negotiations are ongoing between the two clubs but The Daily Mail is reporting that the match might not now take place until December.

This is because another party is getting involved: UEFA. The European governing body has decreed that no domestic games can take place in the same week as continental matches, leaving the two sides with very few possible dates for the fixture. We've done our research on the fixtures of both sides and other competitions, and present you the diary for the coming months. Bold means midweek. 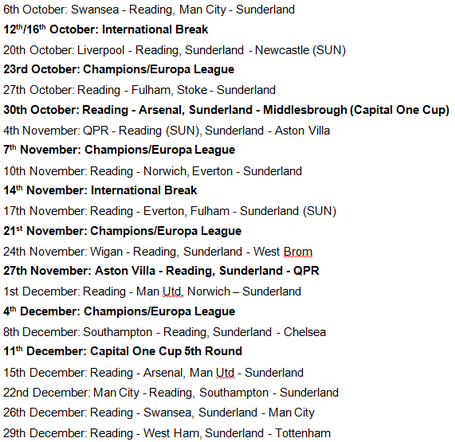 As you can see, the calendar is full from now until at least mid-December. Sunderland will be favourites to progress in the Capital One Cup, at home to Middlesbrough, so it's likely that the 11th December date will also be unavailable. If UEFA sticks to their guns then you can pencil in 18th/19th December as the date the game will be replayed, meaning a lovely midweek jaunt up to rainy/snowy Wearside.

However, there might be a glimmer of hope for managers O'Neill and McDermott. Last season Liverpool and Everton got special dispensation to play their Merseyside Derby on Tuesday 13th March, the same night as Champions League action, because of Liverpool's involvement in the Carling Cup Final and both their subsequent fixtures in the FA Cup Quarter-Final. Here's hoping UEFA have some common sense and allow the Royals and the Black Cats to play before December.

So when might the match be if we're allowed to play it early? Only a few dates are actually possible due to international breaks and TV scheduling - ironically most of the Champions League weeks clash with a Sunday match for one of the two sides. But the three possible dates are:

I should think 7th November would be the preferred date for Reading, as it comes off the back of a short trip to QPR and is followed by a home match to Norwich. It would, however, mean 3 matches in 7 days as the QPR match is televised on the Sunday. Sunderland face Villa at home on the Saturday then Aston Villa away the next Saturday.

24th October would see the Royals making two trips up north in 4 days - visiting Anfield on the Saturday then the Stadium of Light on the Wednesday. Sunderland play Newcastle at home on the preceding Sunday then visit Stoke the next Saturday, so again their distances are ideal but the 7 day turnaround would be a struggle.

And it's a similar situation for the final date, 21st November. Sunderland have a match in London against Fulham on the Sunday then face West Brom at home the next Saturday. Reading, meanwhile, face Everton at home on the Saturday then travel to Wigan the next weekend.

I guess it's a case of strong negotiation between all parties to see which date will be allocated to this fixture. But if the match isn't allowed to be played until the first "free" date then that means 5 matches in 15 days for both Reading and Sunderland, something which neither manager will want to deal with. Let's hope common sense prevails over the cash cow.