What's Going On With The Reading Defence?

In a season in which Reading have already managed to concede six and five in games and only kept four clean sheets in fifteen games, now seems like a good point to have a look at what's going on with Reading's defence.

Share All sharing options for: What's Going On With The Reading Defence?

Reading's defence. Man, if ever there was a difficult topic to tackle for this site, here it is. I mean, where exactly do you begin? It's not that it's bad, (if that were the case then it'd be quite an easy thing to write about) it's the fact that it goes from being reasonably solid to comically awful without warning. So where to start? It's probably best to look at the personnel involved and their strengths and weaknesses.

First things first then, the centre halves, or more accurately, Sean Morrison and Alex Pearce because Kaspers Gorkss hasn't had a look in this season. As with any new pairing it will take time for them to really get used to each others game, especially when trying to implement a new system of playing the ball out from the back, and these two have kind of exemplified that. Whilst it is true that they are both young for defenders, neither of them are really lacking in experience (Morrison has over 100 league appearances and Pearce more than 200) and I'm reluctant to really excuse some of the errors they've been making on those grounds. That being said, it is important to point out their lack of experience in comparison to our divisional rivals. The Pearce/Morrison partnership is by some distance the youngest pairing out of the current top 8 and Sean Morrison the youngest of all the centre halves playing regularly. So perhaps we should cut them a bit of slack before wading in with the "they're rubbish, they're not up to it" rhetoric.

There's a lot to admire about both Pearce and Morrison. They've both made a lot of progress after initially looking like leaden footed hoof ball merchants. Whilst it'd be a lie to say that they've completely lost that element to their games, I'm not filled with the same sense of panic when they take more than one touch of the ball at the back as I used to be. From the team's point of view though it is far from ideal to have two players who don't really have any competition for their places and are clearly not naturals at what they are being asked to do. Added to that, they've got the extra responsibilities of leading the team. I'm pretty certain if he'd signed a new deal without any fuss that Alex Pearce would be leading this side but instead it's Morrison and I do wonder if there's perhaps a slight conflict over who's actually in charge at the back.

The centre half pairing has its issues but overall I don't think it is a problem in the grand scheme of things. They will get better the more they play. The biggest problems facing the side at the back at the moment are Wayne Bridge and Jem Karacan, or more accurately, the lack of.

Let's take the first one. I had my doubts over the signing of Bridge but I've been proved completely wrong. The ex-England international is a class act. He is comfortable and assured on the ball and is positionally very astute. Most importantly though he balances the side, knowing exactly when to get forward and when to sit. He is in short, a very good player that helps settle the defence. When he is not playing Stephen Kelly comes in at left back and the reverse of everything I just said is true.

Some players can pretty effortlessly switch from right back to left back without a worry. You don't even have to be Philip Lahm either, as Chris Makin and Ulises de la Cruz have proved in previous Reading sides, but Stephen Kelly simply can't do it. Kelly is a solid enough right back but put on the left hand side he looks lost. Against Sheffield Wednesday he had an absolute shocker and was destroyed by Michail Antonio, a player that as most Reading fans know, isn't really that good. It's no coincidence that our two big drubbings this season have come when Bridge was out of the team. There is no replacement for him and without him the defence fall to pieces. 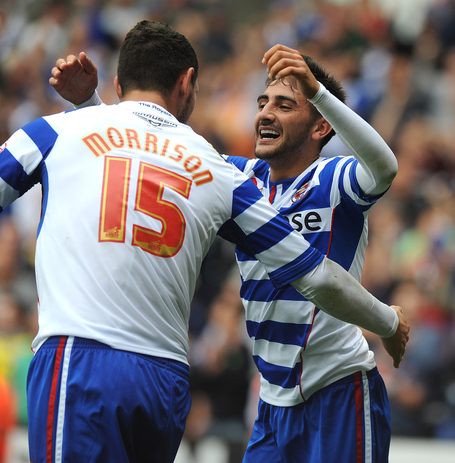 Then we have little Jem Karacan. Karacan is a classic case of a player you only properly appreciate when he's not there and he really has been missed since his injury. I like Chris Baird a lot but he has nowhere near the level of energy that Karacan does and when teams hit us at pace it really gets exploited. Watching back the goals from Saturday (I'm nothing if not a masochist) one thing that really struck me is that for pretty much every goal there's an image of Reading's number 6 forlornly arriving in the box too late to stop the goal.

Now I'm not suggesting that Karacan would have been able to prevent those goals necessarily, or even that he's a better player than Baird but his absence limits us and it shows up an obvious weakness. The whole tempo of the game is slowed down without Karacan and it can put the entire team under pressure as players get caught in possession. I don't know how much Baird's actually played in midfield, I've always remembered him as a defender, but at the moment there are definite question marks. Worryingly though, a quick glance at the subs bench doesn't leave too much room for optimism with Hope Akpan looking out of his depth and Danny Williams yet to convince.

Of course it may all be simpler than all this. It may just be that Adkin's approach lends itself to lots of goals. The result on Saturday was a bit of a freak but up until that point our record actually looked okay; even with those five goals at Hillsborough our league record is 17 conceded in 14 which isn't too bad, certainly nothing to indicate intrinsic problems. If we can start scoring with more regularity then it would take a lot of pressure of the back four.

Therein lies the problem and why writing anything about Reading's defence is so difficult; one week you're looking at the back four and thinking "yep, they're looking settled" and then they concede a last minute equaliser and ship five the next week. I've given up making predictions about this Reading side and how people will play so all I will say is this: surely it won't ever be as bad as Saturday?

More from The Tilehurst End: