What is Reading FC's best XI and do we need one?

Reading have so far used no less than 20 players in just 8 league games so far, with 19 of those earning a start at some stage. With the arrival of Billy Sharp plus any return from injury for Jason Roberts or Mikele Leigertwood, it could well steam up to 21 or 22 before Christmas. Some changes have been down to injuries but the nagging feeling persists that we just don't have a settled team right now. So do we have a standout starting XI or is this all clever rotation from Nigel Adkins?

Share All sharing options for: What is Reading FC's best XI and do we need one?

Ask any Reading fan to rattle off the previous Championship winning sides and that's the teams you'll get. Sure others played a part in the 2005/06 and 2011/12 seasons but by and large those were the eleven names you wanted to see on the big screen before each game.

Well it's not quite so clear cut.

As mentioned 19 players have started games this season and only Sean Morrison, Alex Pearce and Alex McCarthy have been ever present in our eight league games so far. Royston Drenthe, Jem Karacan and Chris Gunter all have 7 appearances but Karacan is sadly out for some time, while Gunter's position looks very much under threat now that Stephen Kelly is back starting games. Beyond that group nobody has started more than five games so far.

On the one hand, as Westy said in this week's Tilehurst End Podcast, this is probably the strongest squad we've had in Reading's history and if you go by that line of thinking it only makes sense to utilise that squad as much as we can.

We've also had an unusually long period before the transfer window slammed shut, hence why some players may have featured more or less than we'd have previously expected. Throw in injuries to Bridge, Drenthe, Williams and Karacan and it's easy to see why we've had to chop and change so much. Nigel Adkins has also been keen to experiment with formations, again giving more players the chance to be selected and dropped.

Players like Adam Le Fondre, Nick Blackman, Hal Robson-Kanu and Garath McCleary have been in and out of the side like yo-yos no matter how they've performed the games before. In many ways I like the ruthless streak in Adkins, especially given the slight over-loyalty that we'd seen in the later days of Coppell and McDermott. Certainly as it stands Adkins doesn't seem to have true favourites and that's probably to be expected from a manager who's only had six months in the job.

the key point for me though, is whether this rotation and experimentation a good thing, or should we perhaps be concerned that Adkins doesn't actually know his best team yet?

To try and answer that question I had to try and build a best eleven of my own and here's what I came up with, on the assumption that everyone is fully fit, a luxury rarely afforded to Nigel Adkins! 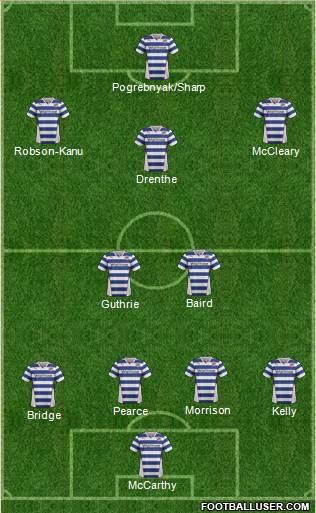 Formation wise I've gone for the 4-2-3-1/4-3-3 as above. I think we've been at our best with an attacking four, and it's more suitable for Adkins preferred style of play.

The back five largely took care of itself. Alex McCarthy is probably the best keeper in the division and we're lucky that Adam Federici is still probably also in the top 10 or so. Since the departure of Adrian Mariappa there's little to suggest that Kaspars Gorkss should replace either Sean Morrison or Alex Pearce who are growing well as a partnership.

At full-back it's a little more problematic but if Bridge is fully fit then there's no questioning his place at left-back. On the right, Chris Gunter has the potential but right now I'd go for the more reliable Stephen Kelly who's looked in good touch so far this year.

The midfield is where it gets tricky, very, very tricky and I imagine 10 different Reading fans would probably come up with five or six different combinations.

For my money Danny Guthrie is probably the only dead cert in the midfield four or five right now. Our August player of the month has been a revelation under Adkins and he's very much key to the more possession orientated football we're trying to play now.

Alongside him and with Karacan injured Chris Baird's experience and reliability make him an ideal choice to help break up the play and keep things ticking over. Both Danny Williams and Mikele Leigertwood are capable fill-ins doing this role while Jordan Obita showed he's also got talent in the middle but I'd like to see what Baird can produce.

Further forward and despite going off the boil recently I can't bring myself to leave out Royston Drenthe. He's clearly got plenty of ability and he's going to round into form sooner rather than later. Alongside him and McCleary has been our most consistent winger this season, while Robson-Kanu is also starting to hit his stride. Again Jobi McAnuff is a capable deputy while Jordan Obita and Nick Blackman also have plenty of potential. Right now though I consider those three to be the most dangerous midfielders and therefore the three I'd put in for a one-off game.

The striker position is also one of contention, especially with Billy Sharp's arrival. Until he's match fit I think it's the Pog's position to lose but could I see Sharp coming in sooner rather than later, yes. Despite his good form in front of goal, I just don't see a place for Adam Le Fondre as a lone frontman, while Nick Blackman isn't quite ready to lead the line of a team that wants to finish in the top two. Jason Roberts is also a natural to fill that position but although I'm picking the above on the basis that everyone is 'fully fit' we've not seen Roberts for a year so I've no idea what he's now capable of.

Ultimately we go back to the question of should we be limiting ourselves to a settled group of 11 or do we just continue with the horses for courses approach we've seen to date?

Personally I'm happy tinkering a little with regards to the three behind the main striker but otherwise I'd like to be able to name the other seven week in, week out but if everyone was fit I don't think we're too far away from that especially if Sharp joins or Pog continues to thrive.

Does history show that having a settled side help you win the league?

Here's how many players made more than 35 starts (around 75% of possible starts) for the promoted sides of the past five seasons.

The stats do show that you don't really need a fully settled starting eleven to win promotion in this league but having a settled core certainly helps.

Of course the interesting team in that list as far as Reading are concerned should be Southampton, who were of course managed by Nigel Adkins. That season Southampton had plenty of regular starters, with that side having eight players make 35 starts, a characteristic of many of Adkins promotion winning sides as was explained in our recent article.

So as with any stats you can take from that what you like, either Nigel Adkins is fond of beating the odds or he's dangerously bucking the trend.

But what do you think? Do you think Reading have a true best eleven right now and do they even need one to win promotion, let us know your thoughts below.

More from The Tilehurst End: