Key Goal For Reading This Season Is Scoring First

We talk so often about key goals in football, and how the second, third or even fourth can be monumental in changing the course of a game. But for Reading, the first celebration of the match seems to be the critical moment in deciding where the points go.

Share All sharing options for: Key Goal For Reading This Season Is Scoring First

With 32 games of the season gone, we’ve had just two goalless draws. And in the other thirty matches, the team that scores first has gone on to win 23 times – just over 75% of the time. Is this down to Reading’s tactics, their attitude, or just pure chance? Let’s try to investigate.

(With thanks to Football365 for the stats) 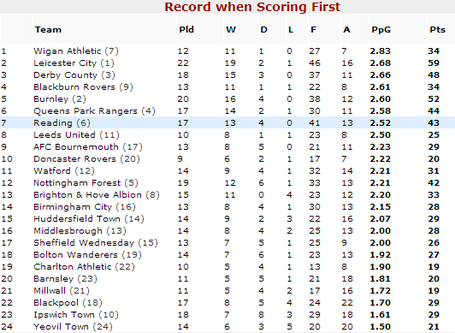 As mentioned above, the Royals have seen goals scored in 30 of their 32 matches so far this campaign. Reading have grabbed the lead in 17 of those matches, and have avoided defeat in all of them – joining Wigan, Derby, Burnley and Bournemouth as the only five sides to hold such a record. In terms of points per game when scoring first, we currently rank 7th amongst all Championship teams, with 13 wins and 4 draws, averaging out at 2.52 points in these matches.

Wigan top the Points Per Game (PPG) table - they’ve only scored first in 12 of their matches, but they’ve gone on to win 11 of them. And table toppers Leicester have shown exactly why they’re running away with the league, winning 19 and drawing two of the 22 matches they’ve taken the lead in. The top seven at grabbing the opening goal are all in the top nine in the Championship – only Forest (12th) and Brighton (13th) fail to convince when they score the first of the game.

So the Royals have dropped just eight points from winning positions, drawing games against QPR, Millwall, Barnsley and Watford when scoring first. The Watford draw was perhaps the most galling, as we blew a two goal lead with Fabbrini taking a slice of luck to equalise in the last minute. Millwall saw us let another injury-time lead slip, even with the Lions down to ten men. Barnsley away was an 80th minute equaliser for the Tykes, whilst QPR also left it as late to level the scores at the Madejski earlier in the season.

But then the turning point. Since that QPR draw, we’ve won all eight of the matches we’ve scored the first goal in – compared to just five of nine before that. It seems that the Royals have learned from their experiences when scoring first, and like most Reading sides in recent years, have taken time to grow into their roles and fully perform. But it can only be encouraging that we’ve let no points slip when scoring first since mid-November. Obviously this has also coincided with the partnership of Akpan and Williams in the centre – a more solid defensive front than one which includes Guthrie, who (let’s not forget) won Player of the Month on this very website for the first two months of the season. 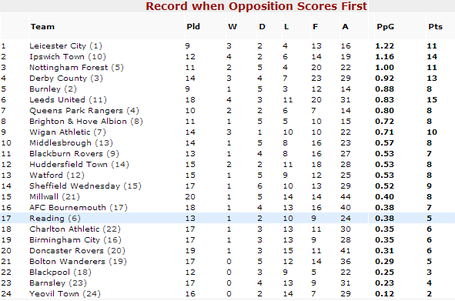 If our record when scoring first is good enough for a play-off chase, then it’s a concern to see us nearer relegation than promotion when it comes to conceding the first of the game. Reading are just 17th in the PPG table when conceding first, which has been the case in 13 of the 30 Royals games which have seen a goal so far this campaign.

Compare this to the other five teams in the top six – Leicester are first (again demonstrating their remarkable abilities this season), whilst QPR have the "worst" record of the other play-off teams, ranking 7th. Ten places in the PPG table between the two hooped sides – showing the Royals simply don’t have it in the locker when they fall behind, and are arguably lucky to still be where they are: The discrepancy between league position and PPG when conceding first is biggest with Reading. The next biggest difference comes with Ipswich, whose 10th place in the League underlies their second-best comeback ability when letting in the first of the game.

Worryingly, the Royals have lost 10 of 13 matches when conceding first – one win in the season opener against the aforementioned Tractorboys, and draws against Bolton and Forest, have been the only five points salvaged when going behind to open the scoring. Two of those results came in the first two matches of the season, as Nigel Adkins' side tried to adjust to the new style of the Championship. And the Forest point was extremely lucky, as Stephen Kelly of all people nodded in a last-minute free-kick in a match where Billy Davies' side should have been cruising to victory. One point from the last 11 matches where we've gone behind firist.

For me, the problem is simply one-dimensionality when we're chasing games. Reading, even in the last few weeks in the rare defeats since our upturn in form, have looked bereft of inspiration and ideas when teams can simply sit back and protect a lead. That's reflected in the fact that our record when going behind is so poor. Some results, such as the 3-0 loss at Middlesborough, the horrendous 5-2 defeat at Sheffield Wednesday, and the 2-0 turnover at home to the same opponents, can be simply put down to a bad (or unlucky) day at the office. But the inherent trend remains in performances which can't be put down to referee error or not getting the luck on the day.

I'd also question Nigel Adkins substitutions, and tactics when falling behind, when it comes to this unwanted record. Against Blackburn, it was a triple substitution which was the attempt to claw back a one-goal deficit - from my view, changing over a quarter of the team with half an hour left can only lead to confusion and time to adjust to the new players. Throwing on as many attackers as possible - the home defeat to Wigan saw Pearce, Cummings and Drenthe replaced by Obita, Le Fondre and McCleary, whilst the loss to Bournemouth saw Gorkss replaced by ALF late on - didn't work either. We've seen Chris Gunter moved into the centre of defence often enough; shades of the much-vaunted "McAnuff in the middle" tactic Brian McDermott employed so often. But whatever Adkins tries, his teams can't seem to recover when going behind first.

So going back to the original question, and let's find out exactly how important the first goal for Reading is, and how it shapes the outcome of the match. Reading (7th to 17th), along with Doncaster (10th to 20th), have the biggest PPG difference between scoring first and conceding first, as both teams drop ten places in the table when they go behind. That's how important the first goal of the game has been for Reading so far - we simply don't seem to be able to recover, whether tactically or mentally, when falling behind. So you may as well go home if we let in an early goal, but by all means stay for the celebrations post-match when we cheer first!

Somewhat amazingly, Ipswich are the complete opposite - their record when scoring first is 23rd, but they have the second best record when conceding first; a 21-place turnaround. Putting that into practice, we beat the Tractorboys 2-1 when Jay Tabb netted the opener for the away side. And when Reading scored first against Donny? We won 4-1, as if to prove the point further.

Is it a worrying trend? Definitely, but the fact is that we have a good record of scoring first, and indeed staying ahead when we've done that. But consistency is the key, and the comebacks of the Premier League (or January at least) last year are long gone. More than ever, the first goal is becoming the critical one in Reading matches. It can't happen every game, and unless we do start to figure out the winning formula when falling behind, it could come to cost us in the final third of the season.