Transfer deadline day has become one of the biggest single days in the football calendar with fans around the country desperate to see their side make that one big signing to help them reach their targets, or hold on to that star man who's got you where you are. For Reading it was once again a case of the later so should we view the window as a success or as failure?

It's amazing how a month can change things because when January opened Reading were in freefall. Four defeats from their last five in the league had left the club in disarray and things hardly got better in the opening week of the new year with an FA Cup exit and only a last gasp goal from Stephen Kelly earning us a point at home against Nottingham Forest.

With that run of form it was unsurprising that both fans and staff were begging for new signings to help Nigel Adkins turn the team's fortunes around.

Here's what Adkins said after the 3-0 thrashing at Middlesbrough to end 2013.

"In January, as a club we have an opportunity to bring a couple of reinforcements in.

"We wanted to do that in the summer window didn't we? Unfortunately that didn't materialise.

"We've got to address where we are at the moment and we have an opportunity as a football club to maybe go and do that in January.

"What we have to do is gives ourselves an opportunity, because at the moment we're not heading towards where we want to be which is back in the Premier League."

As mentioned, his comments were hardly surprising and I doubt any of the couple of hundred loyal fans that had made that long trip to Middlesbrough would have disagreed with him either.

So how is it that a month later we've suddenly won four of five in the league, smashed in 15 goals in that time and have a fanbase that's at least understanding if not happy with no new faces at the Madejski Stadium?

While Reading didn't actually make any signings they DID make changes last month, changes that have shifted how you have to look at the squad Nigel now has at his disposal.

Gone is the early season model that saw Adkins try and implement a more passing/possession orientated game on a group largely used to playing high tempo wing play. Instead the team has gone back to that later style that saw them enjoy such success under Alan Pardew, Steve Coppell and Brian McDermott.

Whether you put that change down to Adkins, the impending change of ownership, player power or just loss of Danny Guthrie to injury, the fact is that this squad is far more suited and comfortable playing a more high tempo style rather than a slow methodical passing game.

That's not to say they've totally reverted to old ways and I'm sure that long-term Nigel will be working towards evolving the playing style but when you can't bring in players that are comfortable playing possession football, you've either got to have a lot of patience and be prepared for a long rebuild or you have to cut your losses and work with what you've got. In Reading's case they've gone with option B.

The reason Nigel hasn't been able to bring in players is largely due to the utter shambles that is the club's ownership at the present time. I won't bother to go into the situation here but Anton's withdrawal from the club coupled with a failure to sell the club in January left the club with precious little money to spend. Of the five he did bring in before January, Royston Drenthe was a signing by the owner who in-between injuries and personal problems seems well out of the fold, Wayne Bridge has been injured, Chris Baird suffered the same fate while rthe club lacked the finances to hold on to Billy Sharp. Only Danny Williams has been what you'd call an unqualified success so far.

Some will ask how with earning £4m or so from selling Kebe and Mariappa plus £20m in parachute payments how there can be such little money to spend. Well, with a wage bill that we can estimate at around the £30m mark (it was £26.6 during our 2011/12 promotion winning season & over £45m last season) and most under contract through till at least next season, it's hardly surprising Chairman Sir John Madejski isn't willing to open the wallet.

Sure there were transfer targets. The club made at least two bids for Hull defender Jack Hobbs who in the end went to Nottingham Forest but the very fact they couldn't keep loanee Sharp, who went to lowly Doncaster, nor have given a deal to Chris Baird despite him still training with us shows how empty the kitty really is.

Under those financial circumstances it's pleasing that Reading resisted the temptation to cash in on some of their biggest assets when they could have earned top prices due to panic buying.

Goalkeeper Alex McCarthy had reported interest from Arsenal and Swansea, with the Welsh club also seemingly interested in winger Garath McCleary. There was also interest from Cardiff in striker Adam Le Fondre who must have caught the eye with two hat-tricks in three games. How strong or weak this interest was only the clubs will know but regardless the fact is they remain tied down to the club for the run-in.

Fortunately while they didn't make signings they have gained depth due to the emergence of younger players and the returns to form of other established first-teamers. 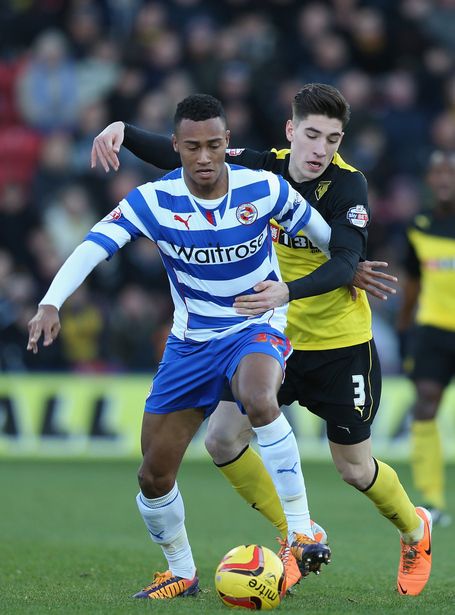 Jordan Obita seems to have solved the left-back problem that's hung around the club since Bridge's injury. With less of a focus on passing, Hope Akpan has showed why he was given playing time in the Premier League, while his partnership with Danny Williams is improving game-by-game.

Elsewhere Kaspars Gorkss and Alex Pearce look back to the sort of form that saw them lead us to the title two years ago, while young Michael Hector seems a viable deputy after impressing on loan at Aberdeen. Perhaps the most important change has been Garath McCleary's ever improving form, which has helped bring Adam Le Fondre into the game as a 90 minute player, finally bringing the best out of one of the best finishers in the division.

When you consider that Reading have Sean Morrison, Wayne Bridge and Danny Guthrie all nearing returns plus the possible, though more unlikely, returns of Jem Karacan and Mikele Leigertwood there should be greater depth as we get into the spring.

On top of that the loan window re-opens for Football League clubs next week, a system that Reading used during the last Championship run-in to add Benik Afobe and Hayden Mullins to the mix, while they could also sign free agents such as Baird.

If Pogrebnyak or Le Fondre get injured the club will be relying on Nick Blackman and Hal Robson-Kanu to fill the void, two players that have both been in and out of form regularly this season and neither really like-for-like replacements.

The centre of the midfield has also looked bare at times, while an injury to Garath McCleary could be devastating right now.

Despite those fears, the last four weeks have shown exactly why many in the pre-season ranked this squad as the strongest Championship side in our history and with a bit of luck with injuries, there's no reason to think that this team can't at least make the play-offs and give themselves the chance to return to the Premier League at the first attempt.

If the point of the January window is to get stronger, Reading have certainly done that. Have they put themselves into a dominant position? Perhaps not but it's hard to argue that the club have had anything but a successful month.