Reading 1-1 Millwall - Tamed By The Lions

Reading fans came into this match with hope and expectation of another dominant win after the 4-1 mauling of Doncaster Rovers last week. But a tame performance saw Millwall deservedly earn a draw against the lifeless Royals, who were perhaps lucky to escape with a point.

Share All sharing options for: Reading 1-1 Millwall - Tamed By The Lions

Right from the outset, Millwall's game plan was clear - shut down Danny Guthrie and stifle the prolific playmaker. Nadjim Abdou was stuck to the Reading midfielder for pretty much the entire game, and without Guthrie free to pick passes, the Royals were looking for Plan B right from the outset. Millwall had the first real chance of the game, as Martyn Waghorn got through from a ball over the top, but Wayne Bridge charged over from left-back to intercept.  Just a minute later, Nicky Bailey cynically carved down Chris Gunter as the Welsh right-back looked to break into the Lions' box. Jordan Obita stepped up, whipped in the free kick, and Sean Morrison rose highest to easily nod past the stranded David Forde. 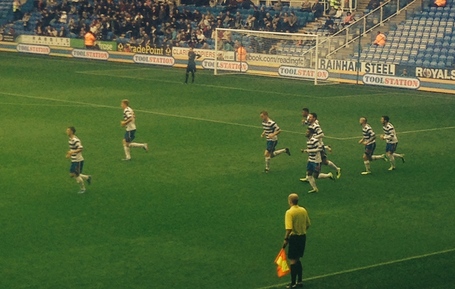 To be honest, that was as good as it got for Reading until the end of the first half, as Millwall completely dominated possession and territory, only being let down by one stray pass, one offside call, or one small mistake. Reading would win the ball back and lump it forward to Pogrebnyak or Le Fondre, who invariably just delivered the ball back to the Lions back four to build again. The frustrations began to rise despite the Royals holding that one goal lead - it was clear to everyone in the stadium who looked the better side on the day.

Reading did carve out one chance right at the end of the first 45, and it came from another Obita set piece. Perhaps the Academy product was wrestled to the ground inside the box leading up to the corner, but with referee David Phillips making completely nonsensical decisions across the board (more to come, don't you worry), it was no surprise to see the man in yellow not even acknowledge the tussle. Anyway, Obita curled in a deep corner which found Pearce at the back post, whose shot was blocked by a Millwall body. Shouts of handball were perhaps optimistic, but that was the best chance since the goal for a Reading side which was being completely shut down by Millwall.

Clearly Nigel Adkins gave his team the treatment at half-time, as the Royals came out of the blocks looking to build on that lead straight away. The impressive Obita dribbled past two Lions with sublime skill, then beat another in getting to the byline. He squared for Le Fondre, and the crowd assumed the poacher had netted the "breathing space" second. Instead, the ball contrived to hit the far post and nestle in the arms of the grateful Forde. From the resulting punt forward, Morrison was blatantly pushed to the ground by Liam Trotter, but Phillips was again completely oblivious to anything going on on the field of play. The midfielder flicked on for Waghorn bearing down on goal -Federici closed down the angle, and managed to get a foot to the shot which was destined for the bottom corner.

Still, in classic "these things even themselves out" style, Millwall were denied what looked a clear, legitimate goal from a corner. Danny Shittu got the final touch on an inswinger and ran to celebrate with the travelling support, until the linesman eventually flagged for offside about five seconds after the ball nestled in the net. The Lions were incredulous, surrounding the referee (Shittu earned a booking for his protests), but after a brief conversation with his assistant, the "goal" was indeed ruled out.

That only served to inspire the Millwall side, clearly feeling hard done by from that decision. But it was Reading who fashioned the best chances of the second period, despite being outplayed for the majority of the half. The otherwise quiet Garath McCleary drilled a cross which found Obita on the left wing, but his shot to the near post only found the side netting. Hal Robson-Kanu, on for the ineffectual Le Fondre, tried a curler from 25 yards after a layoff from Pogrebnyak, but David Forde palmed away for a throw-in. Then Jobi McAnuff, replacing Obita, tried a shot from an acute angle after a Robson-Kanu cutback, but again it was only the side netting which rippled.

Abdou had already picked up a yellow card earlier in the game, and he was late into a challenge on McAnuff - and no matter which edition of Laws Of The Game the ref Phillips had studied from, it was a second yellow. Millwall down to ten men, Reading could close this one out easily. Possession game, use the man advantage, and push on for another like against Doncaster the previous week. Right?

Wrong. The Lions broke upfield through Liam Feeney, whose pace took him to the byline before floating a cross deep into the box. Steve Morison hung in the air and planted a header back across goal, which narrowly missed the far post. Final chance, surely. Nope, as Millwall kept pressing and eventually Scott McDonald broke into the area, flicked the ball past Federici, who could do nothing but bring down the pacey striker. Trotter stepped up and nailed his penalty past the 'keeper, rightfully and justly earning the away side a point. 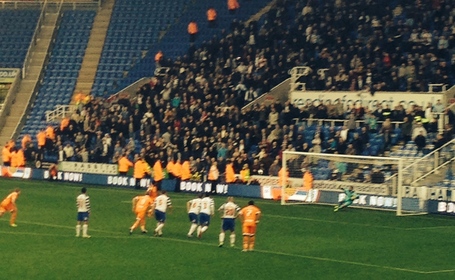 It was only in the final three minutes of injury time where Reading seemed to have any impetus whatsoever, as they finally tried to run at pace and push forward for a goal. But the goal never came, and Royals fans booed at the final whistle. What seemed like a cakewalk on paper was anything but. Ironically, Reading move up to 5th with the other results today. But the performance and the result were simply not good enough for a team and fanbase which, I imagine, expect at the very least another run in the play-offs.

Credit must go to Millwall and Steve Lomas, who came to shut Reading down and did so mightily impressively. Abdou was man-marking Guthrie, and any Reading fan would tell you that everything good normally comes through our Player Of The Month for both August and September. But it wasn't just that. Too many players underperformed on the day - Baird was anonymous for a player whose arrival has seen us solidify the midfield; McCleary had a poor game after his stunning effort last week; Le Fondre had few chances to make an impression with the lack of service.

The Madejski may be a fortress again, but this result simply demonstrates that Reading can't turn up and expect teams to roll over. The next side to visit is QPR, and the Royals will have to show far more than they did today to come away with a positive result.