A last minute goal from Adam Le Fondre saved Reading fans from the second 0-0 at the Madejski Stadium in three days, but overall it was a far better performance than we've seen in recent weeks. Here's how we rated the players.

Alex McCarthy: 6 - This might sound harsh, but compared to recent matches, McCarthy had so little to do aside from take goal kicks and free kicks. He made the saves he had to, but they were generally straight at him.

Stephen Kelly: 7 - Kelly/Gunter could be an interesting battle this season - the former is clearly more sound defensively with the latter preferring to bomb forward. That said, Kelly managed to get forward on a number of occasions to overlap Blackman in the first half.

Alex Pearce: 7 - Aside from his late charge forward which saw him horribly out of position for a Leeds counter-attack, another solid performance. With only Gorkss as a natural centre-back challenging Pearce and Morrison, these two are gelling as well as you'd hope.

Sean Morrison: 8 - This was actually a hard rating to settle on, because Morrison had three absolutely glorious chances with free headers and somehow contrived to miss them all! But defensively he was sound, and ripped up the scripts when Noel Hunt found himself in on goal late on. 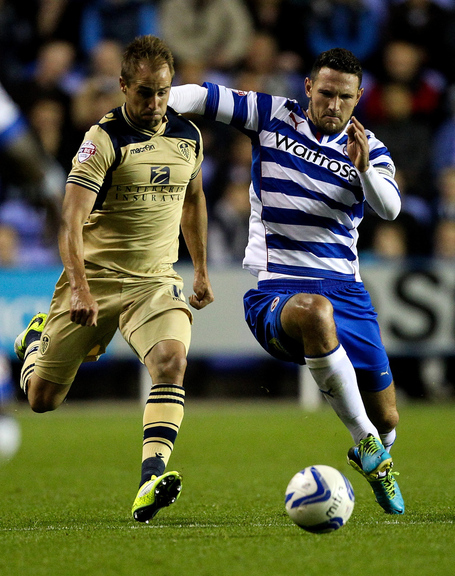 Wayne Bridge: 7 - Class. On one of our early podcasts I said that Wayne Bridge will always give you 7 or 8 out of 10, and today was no exception. Calm and assured in possession as always, and got forward when he could.

Danny Guthrie - 8 - Guthrie loves his new quarterback role. Like Bridge, he never panics in possession, but his range of passing is impressive as well as his vision, and he's thriving in this midfield.

Jem Karacan: N/A - The official site reports that Jem has sustained a serious knee injury which is a major blow to a player who had been one of the most impressive starters to the season for the Royals. 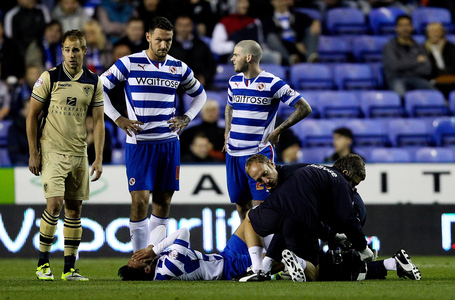 Danny Williams - 5 - For some reason Williams looked off the pace on Wednesday night, not really getting into challenges or taking people on. Had one shot saved well by Kenny, and of course got the flick for the goal, but didn't impose himself on the game enough.

Nick Blackman - 6 - Whilst this wasn't a scintillating performance, it also wasn't near bad enough to warrant the amount of cheers from about 100 fans when his name was read out to be subbed off. Blackman had a fair performance, creating our best open-play chance of the first half. Hopefully Nick doesn't become the new scapegoat of Reading. 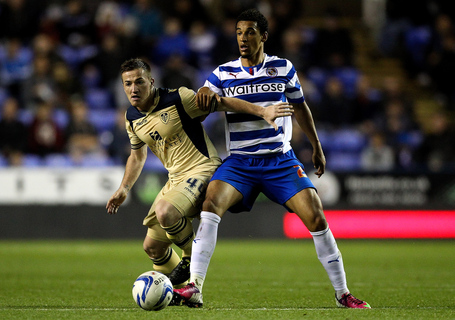 Hal Robson-Kanu - 7 - Another performance that's difficult to grade, because Robson-Kanu held the ball up well in the Jason Roberts style of strength and turning defenders, but his shooting was wayward at best. That said, he might be the best "target man" we have at the moment.

Royston Drenthe - 7 - It was either a 6 or a 7 for Royston, and I've gone with the higher number just because his free-kick deliveries caused serious problems to the Leeds defence. Most concerning is that by the end, Drenthe was essentially walking around the pitch - no doubt Adkins wishes he had a 4th sub.

Hope Akpan - 6 - A decent enough start to the season for Akpan, who was thrust into things by Karacan's injury. Whilst he got forward well and had a few chances on target, he was also outbattled and outmuscled in the midfield far too easily.

Adam Le Fondre - 6 - He may have scored one of the more euphoric goals at the Mad Stad this season (and won the free-kick for it) but for much of the time he was on the pitch, he was contesting headers against far taller opposition. Still, as ever, he was in the right place at the right time for us! 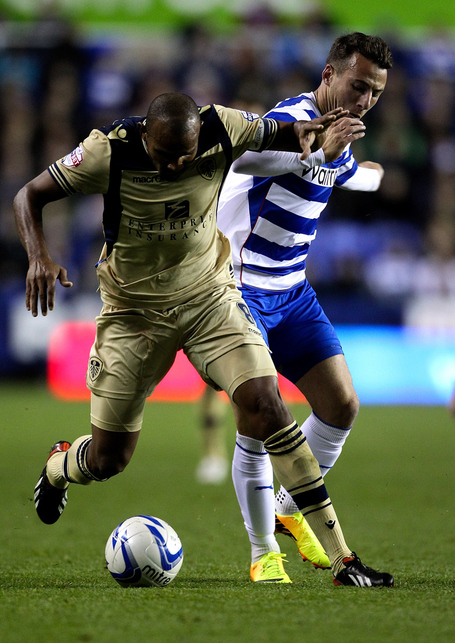 Garath McCleary - 6 - Injected some pace and directness on the right flank, taking on his man whenever possible. That said, he produced a couple of wayward crosses, which was somewhat the order of the day for Reading.

Agree? Disagree? Who was your man of the match? Let us know below...