Who expected that? 80 minutes gone and the Royals looked down and out - the coldest day in history at the Mad Stad and the fans were already heading for the exits. But we learnt last year that Reading are never beaten, and so it proved as three goals in the last ten minutes ensured pandemonium in the stands at the final whistle. Daniel Carrico came in for Mikele Leigertwood in the only change from the side which lost 3-1 at White Hart Lane against Tottenham.

For the first 80 minutes of this match, make no mistake, the Royals were totally outplayed. No real attempts on Ben Foster's goal in the first half as Reading enjoyed the lion's share of possession but simply couldn't muster a shot on target. West Brom, meanwhile, were looking far more potent on the counter-attack and Romelu Lukaku was looking a real handful for Adrian Mariappa and Alex Pearce. He found space on the right-hand side and cut inside for James Morrison, whose shot from 18 yards was palmed away by Adam Federici. But five minutes later Lukaku did open the scoring, as a driving run from Morrison ended with a square for Lukaku to tap home from 6 yards. 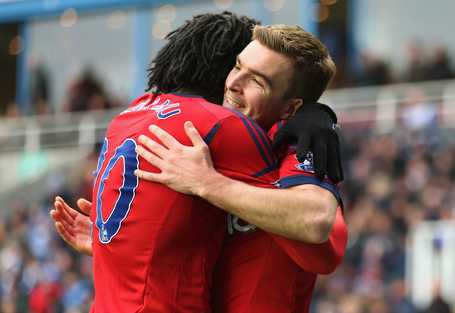 It was depressing watching for Reading, who had come into the game confident on the back of a good run of form over the festive period and into the New Year. Jimmy Kebe had perhaps the Royals' best chance of the opening 45 as a long pass from Danny Guthrie found the Malian in acres of space, but bearing down on goal he took a heavy touch which allowed the covering defender to clear for a throw. Half-time came and boos rang around the Madejski Stadium thanks to a dour, lifeless performance from Reading in the first half.

Brian McDermott made a half-time switch as Garath McCleary replaced Daniel Carrico, the debutant looking a little match-rusty thanks to his recent injury and lack of starts in Portugal. But it was the same fare for most of the seond half, with Reading simply unable to cause any problems. Lukaku, meanwhile, was having an outstanding day, but luck was deserting the Belgian. He was flagged offside after being put through on goal and slotting past Federici - as the boing started up from the West Brom fans they saw the flag, and the Reading faithful responded in kind with their own celebrations. Lukaku then hit the post with a towering header from a left-wing cross, whilst a shot from 18 yards crashed off the bar with Federici a bystander in the Reading net.

But he wasn't to be denied that second goal, and he got the ball out on the right before cutting in and slamming home from outside the box. Federici was beaten at his near post, and some might question whether the Aussie keeper should have kept it out. The truth of the matter was that it was just desserts for Lukaku, West Brom and Reading, who looked down and out at 2-0 with 20 minutes to go. 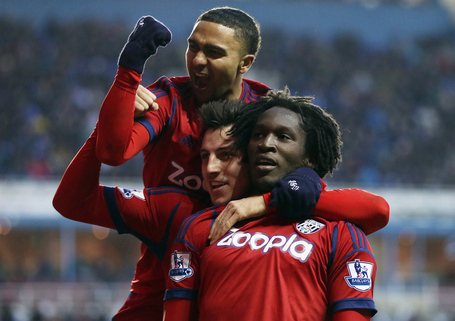 The Reading fans were crying out for Adam Le Fondre, and they got their wish as McDermott somewhat puzzlingly took off Jem Karacan for the poacher. The midfield was now Guthrie lying deep and threading long passes into space, some sublime, with Jobi McAnuff chasing possession in the middle of the park. It was McCleary on the left wing who breathed some life back into the Royals, though, as he crossed deep for Jimmy Kebe to stoop and plant a diving header past Foster. Surely no more than a consolation...?

Kebe had other thoughts. Another pass from Guthrie saw Jimmy chase the ball down inside the penalty area, before being clumsily felled by Jonas Olsson. Up stepped super-sub Adam Le Fondre to sent Foster the wrong way and complete a remarkable recovery. Surely no more than a point...!

The late, late show rolled into Reading once again. Ian Harte swung in a free-kick from just inside the West Brom half. It didn't reach the six-yard box, as it started to fall from the sky just inside the penalty area. Alex Pearce checked his run and diverted the ball towards goal with a glancing header. And Pavel Pogrebnyak, who had worked tirelessly all afternoon, chipped deftly over Foster in the West Brom net. Cue delirium around the Madejski Stadium, and a player pileup by the corner flag. Some Royals fans had started to leave after 75 minutes - they should know better than to leave a Reading match with any time left to play, as the game is never, EVER over.

West Brom tried in vain to snatch a late equaliser with long balls into the Reading box, but Mariappa and Pearce dealt comfortably with the aerial bombardment. And as Kevin Friend blew the final whistle, the chilling winds carried the thought that perhaps - PERHAPS - this could be the catalyst for survival.

To be honest, it's hard not to overlook the first 80 minutes of this match, which was a truly dire performance from Reading and one which rightfully was being booed by the crowd. The team looked fearful and direction-less - Chris Gunter, in particular, looked like a rabbit in the headlights whenever the ball came anywhere near him. Daniel Carrico looked rusty, and showed some poor touches, but there was enough spark and energy there to suggest he could have a big part to play as a holding midfielder in the Royals' new system.

As ever, Adam Le Fondre had a big part to play once he came off the bench. He linked play well and looked assured on the ball. His penalty was sublime and just rewards for his influence. But the plaudits must go to Pavel Pogrebnyak. He worked tirelessly all day running the channels and trying to win headers against the giant Jonas Olsson - he was there in the right spot at the right time to win the game for Reading at the death. Alex Pearce once again looked immense at centre-back, whilst Danny Guthrie showed off his sublime range of passing in the middle of the park.

Where from here, then? Newcastle away next up before Sheffield United visit the Madejski in two weeks. Stephen Kelly will be available for the trip to St James' Park and I imagine he will come straight into the side for Gunter. Carrico should have more match-fitness under his belt in a week's time too so hopefully we'll see a better performance from him. But the most interesting decision for McDermott is the age-old formation question. 4-5-1 didn't work today, but 4-4-2 saw us score 3 goals in 10 minutes, admittedly against a backs-to-the-wall West Brom side who were on the ropes after the first went in.

It's hard to ignore the first 75 minutes, but after the final ten had so much excitement and reward, I think we can overlook those wasted minutes! Hopefully, this is the dawn of something special for Reading - that bundle of players in the North West corner at 90 minutes certainly showed they have the passion for the fight. The night is darkest just before the dawn... and in Berkshire today, the sun rose at 4.35pm.