It was an incredible comeback on Saturday - three goals in the final fifteen minutes saw Reading turn a loss into a win against West Bromwich Albion. Late goals are a trademark of the Royals - but how much of a difference do they make?

You should know better than to leave early from a Reading game... Countless times last season, the Royals showed the value of playing to the whistle - the final whistle, that is - as they secured numerous last-gasp wins en route to the Championship title. Let's have a look at those late goals again now, before having a look at this season's comparison. 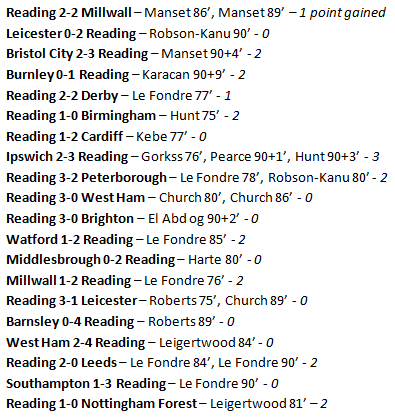 The Royals scored 27 of their 69 Championship goals in the last 15 minutes of matches last season. Of the 89 points we won the League with, 21 were gained via these late goals. Most impressively, perhaps, we were 1-0 down at Ipswich on the 75-minute mark before three late goals (and one conceded) saw us turn 0 points into 3. Mathieu Manset scored in the 94rd minute to secure victory at Bristol City, but Jem Karacan left it latest of all at Turf Moor as his 99th (yes, 99th) minute goal sunk Burnley. Mikele Leigertwood scored the best late goal of all though, as his 81st minute effort at home to Nottingham Forest secured promotion.

But what about conceding goals? Sure, for all we score late on, we must let in a few too, right? 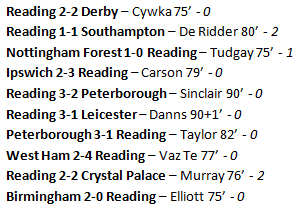 Ten late goals out of 41 conceded, and only three of those goals actually cost us any points. So it looks like Reading are the ultimate comeback team, but that hasn't quite been the case this season...

9 of our 26 goals this year have come late on in games (including 4 in the 90th minute or later) which is the highest proportion in the division. We've gained 6 of our 16 points from these late goals - a better proportion than last campaign. Against Fulham, the score was 1-1 at 75 minutes before Reading twice countered Fulham goals to hang on to the point. Interestingly, we've only scored 1 goal away from home late on in matches, at Wigan - but it was a late goal conceded instead which determined where the points went. The turnaround at West Brom was even better than that at Ipswich last season, as we were only 2-1 down at Portman Road before the two injury-time goals.

And in terms of goals conceded... well, it's not a pretty sight. 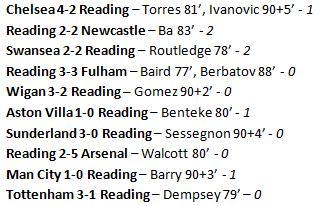 12 late goals against of our 42 conceded, costing us 7 points. Compared to last year it's a similar proportion of goals, but already we've lost more points from those late positions than the entire campaign last year.

Still, January and the second half of the season is the time when it all comes together for Brian McDermott's Reading team - 53 of our 89 points were accumulated in the fixtures after Boxing Day and we've already shown marked improvement and the return of "Fortress" Madejski, which still has to host Aston Villa, Southampton, QPR, Sunderland and Wigan. A combination of late-season form and late-game goals could see Reading defy the odds and escape the drop - and in traditional Reading style, it would be the late, great escape.