When these two sides met in September 2012, Demba Ba's arm was to deny Reading three points at the Madejski Stadium. In January 2013, these things finally evened themselves out as it was Adam Le Fondre's double which sealed the win this time around.

Share All sharing options for: Newcastle 1-2 Reading - A Tale Of Two Adams

A fantastic first-half performance from Adam Federici meant supersub namesake Le Fondre could win the game for Reading with a quickfire double. Garath McCleary replaced Jem Karacan as Jobi McAnuff moved into the middle, whilst Stephen Kelly made his debut in a Royals shirt at right-back.

It was all hands to the pump for Reading in the first-half, as seems to be customary of late. Adam Federici was called into action frequently, and his first major stop came from the dangerous Papiss Cisse, who broke through the Reading back-line and nodded the ball towards the corner, only for the Aussie keeper to fling a hand to his left to palm the ball wide. The Royals were always looking to counter, and Garath McCleary broke out on the left wing and supplied the cross for Pavel Pogrebnyak, who could only slide wide. 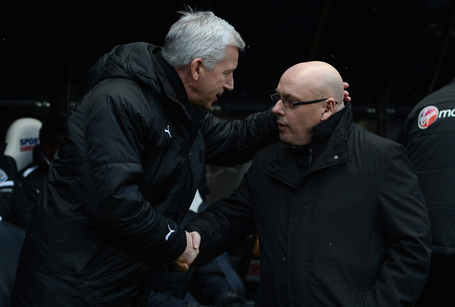 Newcastle continued to pile on the pressure and Cisse had another fantastic chance to open the scoring, as a free-kick from deep fell straight to the Senegalese striker. He struck a sweet volley but his shot was straight at Federici. Then, in classic counter-attacking style, some quick passing saw Pavel Pogrebnyak free Jobi McAnuff who thought he had timed his run perfectly. He had, and bore down on goal with only Tim Krul to beat... until the linesman, who wasn't up with play, assumed McAnuff was offside and raised his flag. Then at the other end, Mathieu Debuchy (who WAS offside) was freed down the right wing, he swung a delivery in for Cisse who again vollied into the wall that was Federici in the Reading net.

It looked as though something special was needed to get the better of the Reading #1 and that duly came courtesy of Yohan Cabaye. Sylvain Marveaux was fouled just outside the box, and though he offered a left-footed option at the resulting free-kick, it was the right peg of Cabaye which curled an absolute peach into the top corner past a stricken Federici. The Magpies had taken the lead after dominating possession - but it wasn't the same, secure lead that West Brom thought they had last week.

And for all Reading's late goals, they could have been level just a couple of minutes after the restart. An Ian Harte free-kick was met by the flailing boot of Jonas Gutierrez, who was lucky to see his deflection sail two feet wide of Tim Krul's far post. Danny Guthrie, playing against his former side, was desperate to recreate Cabaye's delicious set-piece in the first half but his effort, from a bit wider out, was watched over by Krul in the Newcastle net. But Reading were intent on getting that equaliser as the Magpies sunk deeper and deeper. Guthrie provided a dinked cross for Kebe, who nodded down to Pogrebnyak free on the penalty spot - he skied his volley when more composure would surely have seen the net bulge. 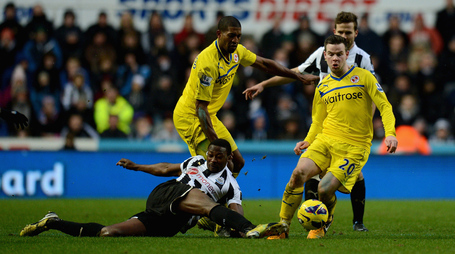 Brian McDermott elected to start playing his trump cards in the 66th minute. Hope Akpan came on for his Reading debut, replacing McCleary who had picked up a knock. And Guthrie, who had picked up a yellow card, was subbed for Adam Le Fondre, with 4-4-2 being the play of the day. And what a play it was. Mikele Leigertwood released Jimmy Kebe in acres of space down the right, he drilled a cross in and Adam Le Fondre was on hand - literally - to slide the ball into the net. It looked like it hit his chest before bouncing onto his arm and into the Magpies goal but after Demba Ba's more obvious misdemeanour back at the Madejski in September, this was just desserts for Alan Pardew and his side.

And once Reading start their comeback, they're hard to stop. A deep cross to the back post was nodded down by Kebe into the path of Hope Akpan. The former Crawley man went for a piledriver but sliced his shot - right into the path of Adam Le Fondre. And with the coolness and crispness he always demonstrates, he curled a sublime effort past Krul and into the net. 2-1 Reading. 75 minutes gone. Had the comeback come too early? 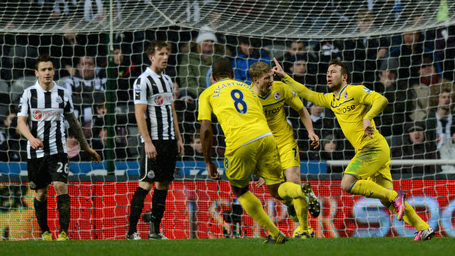 As it started, it was backs to the wall for every man in a yellow shirt. Adam Federici punched out a dangerous Gabriel Obertan cross, who was Pardew's last play in an effort to salvage a point after bringing off the dangerous Cabaye, to boos from the Newcastle faithful. Papiss Cisse had enough chances to kill the game in the first half and he could have made up for those misses when a Debuchy cross fell to him - but with the air of a man lacking confidence, he blazed his shot over. Newcastle's final chance came from Obertan - Shola Ameobi guided a header into his path but the immaculate Federici was in the way once again.

As the final whistle blew, those comebacks of last week and last season were brought to mind. Reading were behind for a long period of the match, but refused to lie down. Substitutes had done the job again - Adam Le Fondre's double added to his part in two goals last week. And as the players and manager walked over to the 1,068 Reading fans who braved the cold and snow to visit the north-east, the faint flame of Premier League survival hadn't gone out - instead, it burned a little brighter. 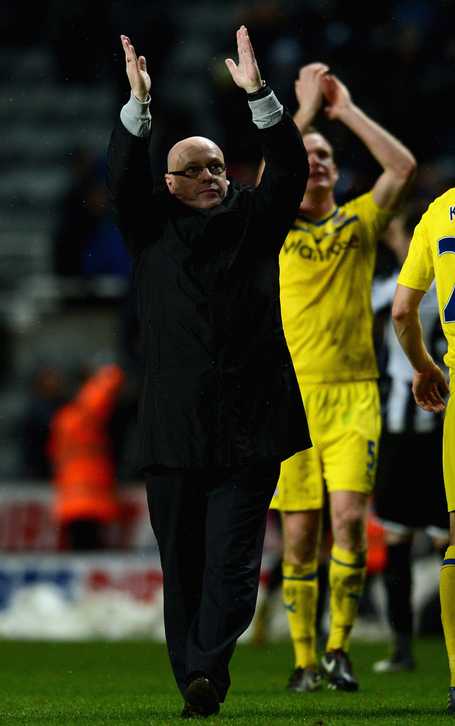 At 1-0 down, you never really felt like Reading were out of it. But again it was only down to the wastefulness of the opposition strikers that the lead was only 1 goal for so long. Romelu Lukaku could have had 5 last week and this week it was the turn of Papiss Cisse to wonder which pre-match ritual he'd forgotten at 2.55pm. Still, most of that was down to the superb Adam Federici who made three world-class saves in the first half alone, and kept his head for the full 90 minutes to secure three valuable points for Reading.

And as Adam was the name on everyone's lips in the first half, so it came to be in the second. Le Fondre is certainly up there with the ranks of Solskjaer when it comes to the word "supersub" and he once again demonstrated his poaching instinct and calmness under pressure - to arrive in the box at the ideal time for the first, and to net the second with skill and precision. That's now 8 goals for Alfie in the Premier League, tying him second with Theo Walcott for top-scoring Englishman. Your call, Mr Hodgson...

The rest of the team deserve enormous credit too, for a fully committed performance throughout. It seems to be in-built to this team that they know they have a chance if it comes to the final quarter of matches and they're still in with a shot. It must play on the minds of the opposition too, as by the 70th minute it was Newcastle who had pulled everyone back and simply couldn't get anything going in attack. I wrote an article on how late goals are a trademark of Reading - sure, they weren't quite as late as last week against West Brom but it shows that when this team is attacking without fear, they're very difficult to stop.

And now that "survival" word is very much in focus. Reading are now just two points off Newcastle above them, and much closer to the others fighting against relegation. We've got Sunderland, Southampton, Aston Villa, Wigan and QPR all to play at home - win all of those and we're on 34 points. A couple of results elsewhere and suddenly the pit of despair we were all in a month ago has an escape route. A long way to go yet, but these two battling victories have shown that the Royals aren't ready to change the patches on their sleeves just yet.