This season has been one of discovery for Brian McDermott and everyone involved with the club. One of the clearest examples of this has been the issues which we seem to have had in adapting to a formation which works at premier league level. This post will have a go at explaining some of our problems by way of some lovely tactical diagrams and offer some suggestions regarding how we might see the team set up in the future.

In our wildly successful second half of the season Reading set up in a traditional, English 4-4-2. The one difference between this and the typical 4-4-2 was the very attacking nature of our wingers, in particular Jimmy Kebe. What this meant was at times we played almost a 4-2-4. McAnuff and Kebe's roaming wing-play was backed up by the two defensive midfielders Karacan and Leigertwood. 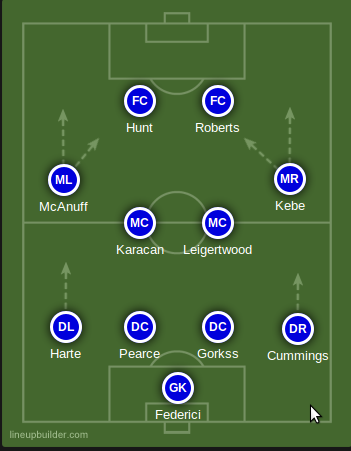 2012-3
At the start of this season it seems that McDermott believed that a classic 4-4-2 would not cope in the premiership, as most teams in the top division play a modified 4-5-1. This would mean two things, our second striker would end up being obsolete and our midfield was likely to be overrun. Indeed McDermott's signing of Guthrie suggested that he was planning on playing a 4-5-1, or rather a 4-3-2-1.
And that indeed was how we set up in August. In our away game at Chelsea, where we were deeply unlucky to not come away with a point, Reading played 4-3-2-1 with Pogrebnyak as the lone striker, McAnuff and McCleary on the wings and a deep-lying midfield three of Guthrie, Leigertwood and Karacan. The tactical gambit worked pretty well, although we may have been a bit too open to play at Chelsea. 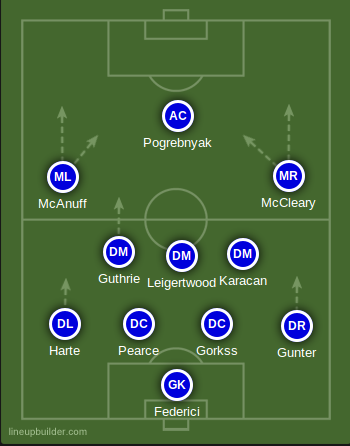 McDermott thus had every right to continue this way. Brian however changed his mind after a unfortunate chain of events. Firstly the game at Sunderland was cancelled meaning Reading had to wait a massive 25 days for the next league match at home to Spurs. In that game, the exact same formation and team which had been so impressive against Chelsea were taken apart by the team from North London. This convinced McDermott to return to the tried and tested 4-4-2 formation the squad feels most comfortable with. Brian's gut feeling was confirmed by a rambunctious, if slightly chaotic, away win against QPR in the league cup and some decent results in the period immediately following it.
Despite this upswing in form which brought draws against Newcastle, Swansea, and even a win against Everton, there were warning signs that the formation might not be working. Our beloved 4-4-2 gave us more in attack but left us often dangerously out-manned in the centre of the field. When we played attackingly in this formation we conceded far too many goals, when we tried to defend we weren't able to create enough chances. Either way something wasn't right, a fact which was underlined by our second inept defensive performance in the space of 6 weeks against Arsenal. In this game Reading were pulled all over the place by Arsenal's superior movement and ball distribution. Enough was enough and McDermott was ready to ring the changes. As well he might after 6 consecutive defeats.
Reading playing 4-4-2, Arsenal (H), 17/12/12, 5-2 loss 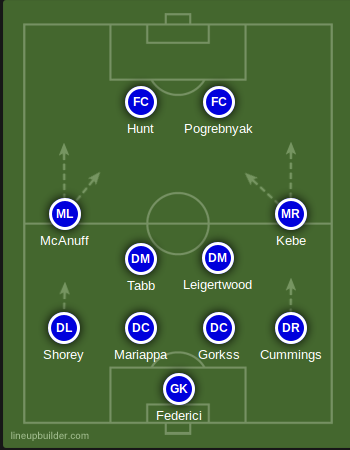 McDermott decided to go back to the 4-3-2-1 that had brought positive signs on the pitch at Chelsea. There were however two important problems for Brian. Firstly the next game was at league champions Manchester City and secondly, what to do with our problem right-back position? Mcdermott's solution? Bring Kebe almost back into defence to 'babysit' for Chris Gunter whose confidence had been ruined by facing wave after wave of opposition attacks. Defensively the ploy worked and we almost came away with a draw, through a frantic rear-guard action. This performance heartened McDermott and we went on to play pretty much the same way with relative success against Swansea and West Ham at the Madejski over the Christmas period.
Reading 4-3-2-1, Manchester City (A), 22/12/02, 1-0 loss 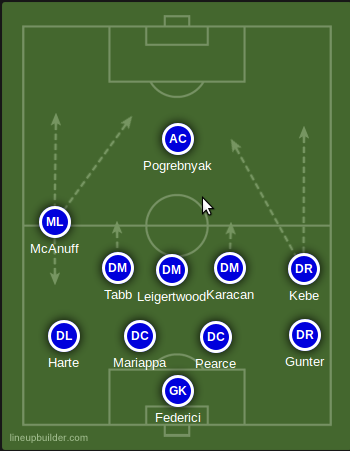 This brings us to the start of the transfer window. The poor performances whilst playing 4-4-2 and the relative success of the 4-3-2-1 convinced Brian to go out and get the players which would allow us to play in the latter system. This has seen defensive midfielders such as Daniel Carriço and Hope Akpan coming in and the attempt to sign Stoppila Sunzu. McDermott has also been able to solve the right-back problem with the premier league quality defender Stephen Kelly being signed from Fulham. The addition of the Irish international allowed us to play a more expansive game away at Newcastle. The assurance of having a competent full-back behind him meant Kebe could be used far further up the pitch than he had over Christmas. Jimmy went on to play a key role in the two goals we scored against Newcastle.
Reading playing 4-3-2-1, Newcastle (A), 19/01/13, 2-1 win 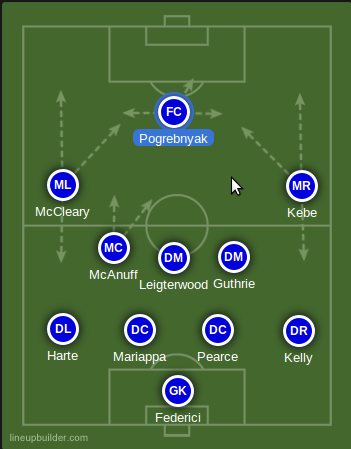 So we seem to have finally found a system that will allow us to get results at this level, but McDermott has more ambitious plans. The last couple of days have seen much talk of signing Blackpool's dynamic winger-cum-forward Tom Ince. Where would Ince fit in if he did come? One option would be to play a very gung-ho 4-2-3-1 with Ince in the hole behind Pogrebnyak. The problem with this is I fear it would be too attacking against the leading teams in the division. To play this way we would need two defensive midfielders doing a hell of a lot of leg work.
Reading playing a 4-2-3-1 with the possible arrival of Ince 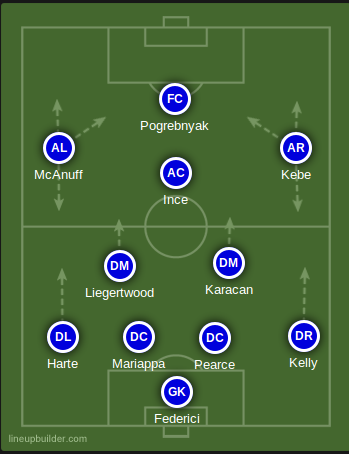 We have of course played 4-2-3-1 before. In our great run of form in the second half of the 2009-10 season the sheer talent of Gylfi Sigurdsson and the hard-running of Shane Long brought us success and a lot of goals. This was however at a lower level and Gylfi was probably better then than Ince is now.
Reading playing a 4-2-3-1, Leicester (A), 24/03/2010, 2-1 win 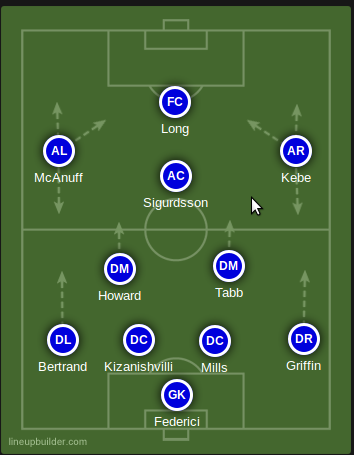 This seems to suggest that Ince would be a direct replacement for McAnuff on the left-hand side in a 4-3-2-1.
4-2-3-1 with Ince on the left 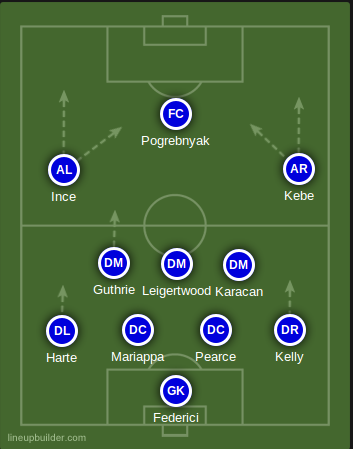 The great thing about a signing like Ince is it would give us options, allowing us to move from a 4-3-2-1 to a 4-2-3-1 in matches where we need to push for a goal. This all without having to revert to the, once shining bright but now relatively defunct, 4-4-2. Even if we don't sign Ince, McDermott seems to have learned his lessons and the evidence suggests that playing 4-3-2-1 we have a decent chance of staying up. Whether we will or not is, of course, another matter.
Thanks to Rob Evans (aka Papereyes) for a helpful discussion of Reading's tactical ploys