Be honest with me - at 2-0 down, did you think we were dead and buried? You should know by now that the Royals are never beaten. The last three games Reading have gone behind, they've turned it around in the second half. And yet again, Adam Le Fondre came off the bench to rescue the situation for McDermott's men.

You certainly get your money's worth with a visit to the Madejski Stadium. Just as in our last two Premier League matches, it was looking gloomy as the Royals were totally outclassed and outplayed. Those games turned on the introduction of Adam Le Fondre - and tonight was no different, as the former Rotherham striker scored his fifth goal in three substitute appearances to turn the game on its head. One change from the side which won at St James' Park saw Jem Karacan come in for Garath McCleary

The first half was a very tight affair - Reading were happy to let Chelsea have the majority of possession and hit them on the break with quick balls forward. Pavel Pogrebnyak was embroiled in his own personal battle with Branislav Ivanovic, who was pushing and shoving the big Russian striker at every opportunity. Mark Halsey was reluctant to give any fouls for those misdemeanors, however, meaning his luck was very much out. The Blues were stroking the ball around at will, with Juan Mata the architect of everything good going forward. But despite their dominance of possession, they failed to create any meaningful chances on goal - Ashley Cole had some of their best efforts with wayward 25-yarders. Their first real chance came from a free-kick into the box from Frank Lampard - Gary Cahill lost his marker and diverted a diving header just past Adam Federici's post.

Just as Brian McDermott and Rafa Benitez were readying their half-time team-talks, the breakthrough came - and it was a Spanish connection which unlocked the stout Reading back-line. The out-of-sorts Fernando Torres flicked a delightful chip through the Royals back four, and Juan Mata arrived to volley past Federici with aplomb. It was their first shot on target, but probably good value for the amount of possession the Blues had enjoyed in the first 45. It was killer for Reading who had seen off the Chelsea threat for 45 minutes - but unlike usual, a goal against them in injury time saw them trail 1-0 at the break. 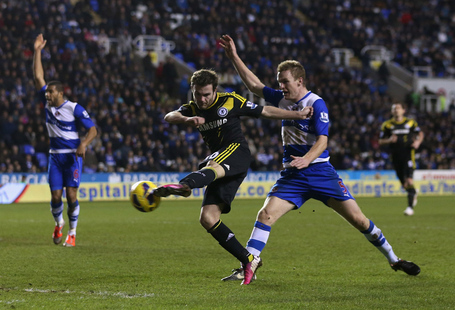 The second half went much the same way, as Chelsea were content to sit on their 1-0 lead and patiently build an opening whilst Reading tried to absorb the pressure and get a counter-attack going. But any time the Royals won back possession it was quickly wasted by an aimless hoof forward from Mikele Leigertwood or a Reading full-back. Chelsea were looking far more dangerous and had a golden opportunity to make it two. Frank Lampard knocked a glorious ball over the Reading defence and Oscar tried an acrobatic flick over Federici, but luckily for the Royals stopper the Brazilian was off target. 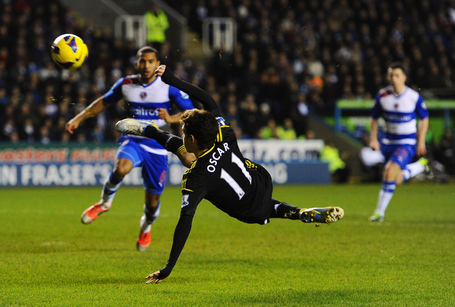 Reading were increasingly losing their way and frustration was growing as, quite simply, Chelsea were swarming the Royals any time they gained possession again, leading to mistakes and turnovers. Adrian Mariappa was drawn forward with the ball but Lampard stopped him in his tracks - he quickly released Oscar who ran into the box and tried to square for Torres, but Ian Harte denied an open-goal with a last-ditch block from the Spanish striker. From the resulting corner though, the second goal finally came. Juan Mata delivered an outswinger, and Lampard nodded expertly into the corner, over the despairing Pogrebnyak on the line. Job done for Chelsea - but Adam Le Fondre was stripped off on the sideline, waiting to enter the field of play... 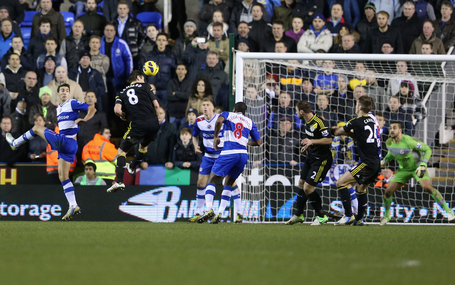 With a two-goal lead Chelsea were a lot more happy to sit back and gift Reading possession, which had been the comeuppance of so many teams holding onto advantages recently. And Le Fondre showed he was up for the challenge straight away, as he headed over from an Ian Harte free-kick then curled an effort just past Ross Turnbull's left post from 20 yards. Hope Akpan was introduced in a final throw of the dice from Brian McDermott and his first contribution was to heed the calls of the Reading crowd when the ball dropped to him fully 35 yards out - his piledriver wasn't too far off the Chelsea net.

But the Blues were still looking dangerous on the counter, and Oscar had a chance to put the game beyond Reading as he ran in on goal from a Yossi Benayoun pass; Federici stayed big and palmed the ball away to safety though. And it was time for Le Fondre to work his magic again - though Akpan had a huge part to play in the goal. He spotted ALF's run into the penalty area, played a perfectly-weighted pass into space, and Le Fondre took one look up before slamming the ball past Turnbull at his near post. There was an air of inevitability about what was coming... 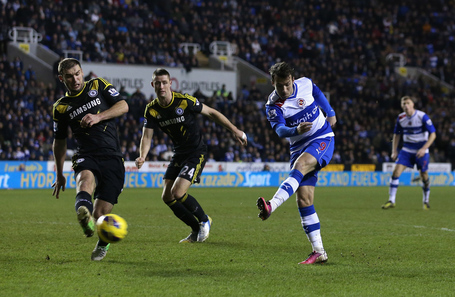 It was time for Chelsea to waste as much time as they could - a far cry from a week ago when assault was necessary to retrieve possession. Despite their sudden inability to pick up the ball for a throw-in, Ramires found space for a 25-yarder which Federici had to be alert to stop. And when Reading won a free-kick just inside their own half, it was a remarkably similar situation to that final goal at home to West Bromwich Albion...

Adam Federici punted into the Chelsea area. The ball eluded everyone and Jimmy Kebe, feeding off scraps, headed back into the mixer. Hope Akpan deftly flicked the ball across into space, where three Reading players were waiting. And Le Fondre, with coolness, composure and a modicum of cheek, simply flicked the ball over Ross Turnbull and into the corner of the net. It was an absolutely incredible finish, to stay that calm and simply curl the ball past Turnbull with disdain. Cue more delirium at the Madejski Stadium, another rescued result, and yet more belief that survival is not past this team at all. A draw lifts the Royals out of the relegation zone - and there's no reason at all that we can't be there in four months' time. 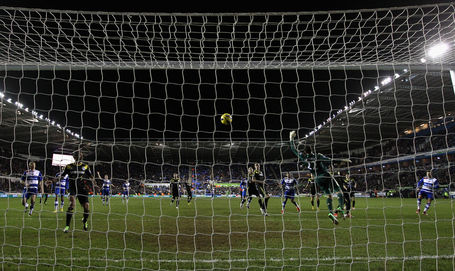 This match report is astoundingly similar to the last few I've written on West Brom and Newcastle United. Outplayed for the first 70 minutes of the match, with seemingly no chance of salvaging even a point, then a certain number nine enters the fray and changes the game. The only difference is that today was "only" a point! Adam Le Fondre is now the top-scoring Englishman in the Premier League after tonight's brace, and his goals demonstrated his sheer ability to find the net. The first, a powerful left-footed effort past Ross Turnbull at his near-post; the second, a peach of a lobbed half-volley in the last minute of the game. He's not fazed by any game situation and if his goals keep us up, he'll be worth the £300k we paid for him and then some.

Hope Akpan was a similar price and he's shown in his limited playing time so far that he has a certain amount of class about him too. His assist at Newcastle may have been slightly fortuitous but his two tonight were top-drawer. The first, a great spot and a pass with perfect pace and precision for Le Fondre to slam home; the second, a cushioned header right into the path of ALF. Another player might have seen the headlines and tried to score for himself but his presence of mind was just as important in that second goal - and you saw by the celebrations, with the team congratulating him as well as ALF, that he's settled right into the squad. Perhaps going forward we'll see more of him, as he certainly looks to be raw but gifted. And there's no better club to develop that talent than Reading.

It's actually quite difficult to write these match reports at the moment because had the game ended at 75 minutes, these words would have contained far more vitriol - I'd draw the line at swearing though. A different situation with the opponents being "European Champions" Chelsea (another chant for Di Matteo and applause at Reading's chant "we support our manager" suggest they're still not behind Benitez), but yet again it was men vs boys for a good portion of the game. Leigertwood and Karacan were ineffectual, and gave the ball away time after time. Ironically the one time Ledge didn't hoof clear, it was a pass for Chelsea's opener. '

The game plan seems to work though! We can't chase games for 90 minutes, but 20 seems to be more than enough for Reading at the moment. As long as the points keep coming, and the late drama keeps working out in the Royals' favour, I'm sure the fans won't mind. A win against Sunderland is the most important thing now - three points at home to the Black Cats and the tunnels have been dug for the Great Escape...