A statistical glance at the Royals' season so far

Thanks to Ben Mayhew on @experimental361, Royal Hoops has taken the international week to think about how Reading are doing (statistically) compared to other Championship teams.

Share All sharing options for: A statistical glance at the Royals' season so far

Reading Football Club began this SkyBet Championship campaign with the aim of getting automatic promotion. With 11 games gone, the lads in the (real) blue and white hoops have won five, drawn four and lost two to leave them seventh in the table.

Yet all is not as bad as it seems at first glance, with the team yet to really click with Adkins' system and his change of player roles.

We also had late additions to the team in Baird and Sharp and had heads being turned (I'm looking at you, Pavel...) during the summer which all contributed to an underwhelming start, albeit a relatively impressive one for a team that calls the Madejski Stadium its home.

With Mariappa departing, Pearce and Morrison thrown together to forge a relationship, a stuttering strikeforce with the relieving arrival of goalscorer Billy Sharp, it's interesting to look at how the 'Berkshire Blues' are coping with the demands of the Championship.

This is where you'll need to turn your statistical brains on, folks.

Ben Mayhew of @experimental361 (which sounds like a crazy formation, to me) has come up with a formula in Excel to create graphs for leagues across Europe, including the Championship. It's fascinating viewing.

Let's take a look at our defence for a start. Whilst only conceding 10 goals this season, there are a further six to add to that if you consider that abysmal Capital One Cup game against the Posh.

McCarthy and co have managed to keep four clean sheets so far this season, which is impressive for a defence that has only really played with each other at the beginning of the season. 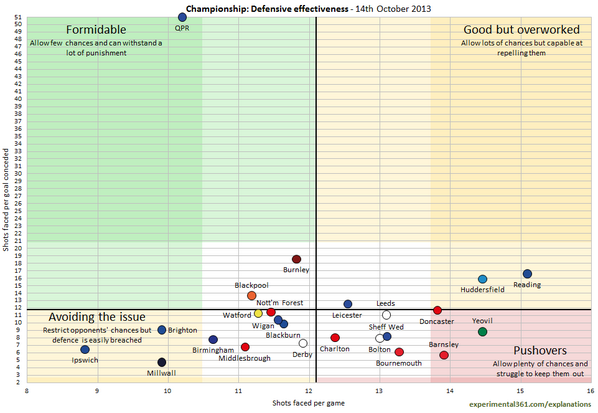 Statistically, Reading face more shots per game than anyone else in the Championship, but also face the third highest shots per goal conceded.

This can be put down partly to new tactics and partly to a new defence — but it should mostly be put down to the magnificent Alex McCarthy, who has carried his form from last season into this.

To summarise: Reading, compared to the rest of the league, are the most overworked in the league but also one of the best at keeping them out. How many clean sheets could Reading get if they stopped conceding shots on goal?

Now we'll turn to the much maligned offence. Reading boast an array of talented forwards, but none of them have yet to hit form and Adkins is seemingly still to decide which is the most likely to bang them in on a regular basis. Does he go for the strength of Pogrebnyak? The instincts of Le Fondre? The potential of Blackman? The untried Robson-Kanu? Ugwu? Samuel? Or has he finally got his answer in Billy Sharp? Only time will tell, but as yet the offence has been surprisingly clinical. 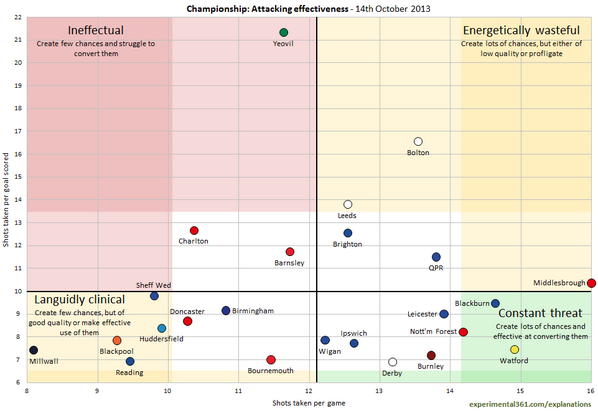 Reading are almost the exact opposite in offence, where take the third fewest number of shots per goal, but are joint first at converting their chances.

Does this explain much about the strikers or the midfield behind them? It's most likely to be a combination of the two.

Chances created usually is put down to the midfield not doing their job, but in this case it can actually be put down to the rotation of strikers and the lack of link-up play provided by those who have had their chances. Le Fondre is notoriously a penalty box striker, unlikely (incapable?) of providing a target and some good link-up with advancing midfielders and wingers. Pogrebnyak has the build to do so but is fairly clumsy and relishes battling defenders more than providing a focal point, whilst for my own sake the less said about Nick Blackman the better.

However, despite the lack of chances, the team is still putting the ones they do get in the back of the net. Whether these figures improve when Billy Sharp gets games is yet to be seen, but if previous form in the Championship is considered, it looks likely that he good be the man to fire us to the promotion spots.

To summarise: The Royals' offence is the opposite of the defence, where they create very few chances per game — but put them away in a more clinical fashion than the majority of the league. When the team starts to click, will there be more chances (and therefore goals) created for the Royals?