After fifteen matches of the 2013-14 season, the Championship already has three clear leaders - Burnley, Leicester City and Queens Park Rangers.

Nottingham Forest came out on top in the East Midlands derby at the King Power Stadium.

Early on Forest 'keeper Karl Darlow was forced into a fantastic save by former-England international David Nugent. His headed effort was tipped over, after a Anthony Knockaert free-kick.

Fifteen minutes later, Nugent would head over from six yards after another Knockaert free-kick from the edge of the box.

Leicester would be punished for these misses. A mix up in the Leicester box, following a Jamie Paterson cross, lead to Simon Cox slotting the ball into the gaping net.

Herny Lansbury forced Schmeichel into a simple save. The resulting corner was played in by Andy Reid and a goal mouth scramble ensued. Henry Lansbury had an effort cleared off of the line, before Jamie Mackie fired home. This was Mackie's second goal for Forest, following a £1m move from relegated QPR in the summer.

In the second half, Daniel Drinkwater won Leicester a penalty in the second half - their ninth of the season. David Nugent couldn't convert; blasting the ball over the crossbar.

Nottingham Forest move up to fifth, while Leicester stay second.

Burnley missed the chance to go four points clear - as they were held to a 1-1 by newly-promoted Bournemouth.

Tokelo Rantie had Bourenmouth's first major effort - a shot fired from the edge of the box, but just too high.

Burnley responed well - Kightly crossed for Jason Shackell, but an acrobatic clearance by Pitman stopped the hosts from going in front.

After the break, Rantie broke free of the Burnley defence before firing home from eighteen yards.

Danny Ings played a chipped ball to Vokes, before a smart stop by the Cherry's goalie Lee Camp.

Burnley would earn a point, a ball played into the box was headed down by Tripper to Ings - who headed home over Camp from six yards.

Keith Treacy could have won it for the league leaders - as his free-kick was saved by Lee Camp.

Reading and QPR played out a 1-1 draw at the Madejski, following goals by Garath McCleary and Joey Barton.

Ipswich would hit back after the break, McGoldrick's length run lead to Frank Nouble's first goal of the season.

Paul Taylor, on his second appearance since returning from Peterborough, slotted home a left footed shot on eight four minutes.

In stoppage time, Blackpool thought they had snatched a draw - as Stephen Hunt's clearance could only reach Dobbie and Steve Davies slotted home. Davies took the ball back to the centre-circle quickly thinking there was time for a winner.

There was - an unmarked Daryl Murphy headed home the winner for Ipswich, from a corner, to condemn Blackpool to their first home defeat of the season.

Middlesbrough 2-2 Watford: All Square at the Riverside.

Middlesbrough took the lead after a well worked goal. Adomah slotted home after a Rhys Williams back heel.

Cassetti caught the Boro defence cold and played a beautiful chipped through ball to Troy Deeney, who reach the ball before Middlesbrough goalkeeper Jason Steele.

An defensive error by Ayala lead to Watford's second goal. Forestieri pounced on a poor touch by the defender.

Ayala would cancel out his mistake, by heading home in stoppage time to snatch a point.

Dexter Blackstock flick header found McCormack for his first goal of the game. A calm finish by the Scottish international.

Paddy Kenny made a smart save to stop former-Royal Simon Church from levelling the game.

A fantastic volley from the edge of the box by Cameron Stewart saw Charlton go in level at the Valley.

Danny Pugh was fouled, after the break, and McCormack converted the spot kick with a powerful shot, high into the goal.

Callum Harriott, who gave away the penalty, had a deflected effort saved by Kenny.

A poorly cleared free-kick fell to McCormack, six yards out, and he fired home for his first ever professional hat-trick.

He would score his fourth, after a free-kick was placed perfectly. Ross McCormack is now the Championship's top goalscorer with eleven this season.

Derby took Sheffield Wednesday apart at Pride Park to move up to ninth.

County dominated the first half, and their goal on the stroke of half-time was fully deserved - Jake Buxton headed home from a Jamie Ward corner.

Craig Forsyth's low cross was turned home by Will Hughes.

Derby had chances to score more, but the East Midlanders would be happy with their win.

Brighton 3-0 Blackburn: Blackburn fall to another away defeat

Brighton won their first home game since September, as they brushed aside Blackburn at the Amex.

Blackburn had chances, however - former Manchester United keeper Kuszczak made a save following a Tommy Spurr header.

Cairney's long range shot has turned away by Kuszczak in the second half.

Blackburn were still pushing for a goal - Spurr headed against the crossbar following a Kuszczak clearance.

Andrew Croft then had an effort saved, before Barnes finished off the match.

Brighton move into the top half of the table.

Wigan edge Yeovil - as the hosts fall to another 1-0 home defeat.

Madden came close afterwards, on his first start since October.

Multiple goal line clearances stopped Wigan from taking the lead before half-time, but they still had time to hit the woodwork - after a Albrighton shot.

Wigan had only just returned from Russia, after a Europa League game against Rubin Kazan, and they started looking like they would take the points in the second half. More goal line clearance stopped them.

Fortuné converted Holt's cross to win the game for the Latics.

Wigan are now unbeaten in four, as Yeovil are rooted to the bottom of the table.

Birmingham ended a six match run without a win at Huddersfield.

Gerrard's flick header levelled the game for the hosts, just after the half hour mark.

Bartley headed home from a corner, as Birmingham took control of the second half.

Another Bartley header - this time from a free-kick - saw the Blues head to the three points.

The on loan Swansea man scored his first Birmingham goals in this match.

Birmingham move away from the relegation zone.

Bolton took control of this match from minute one - as they won at home for the first time this season.

Rob Hall put the ball home, after a lovely move. The goal came after only five minutes - the fastest goal in the Championship this week.

Easter levelled the match for Millwall, as they looked to end a five game run without a win.

Before the interval, Beckford lobbed Forde to put Bolton 2-1 up. A fantastic finish by the former Leeds and Evertonman. It was his fourth goal in five matches.

At the end of the game, Spearing found Moritz who was able to fire home for Bolton's third and final goal.

Two relegation threatened sides played out a 0-0 draw at Oakwell.

Former Reading loanee-Khumalo took down Pedersen with a clumsy foul. O'Grady's penalty was saved by Turnbull.

Paddy McCourt went on an amazing run, but his shot was straight at Turnbull.

Another mazy run by McCourt was ended in the penalty box, in the second half, but the referee didn't give another penalty to the home side.

Cywka could have won the game for Barnsley, with a header from six yards, but it was placed wide.

Doncaster chairman John Ryan stepped down before this game, after taking Doncaster from the Conference to the Championship. He watched the second half with the Doncaster fans. 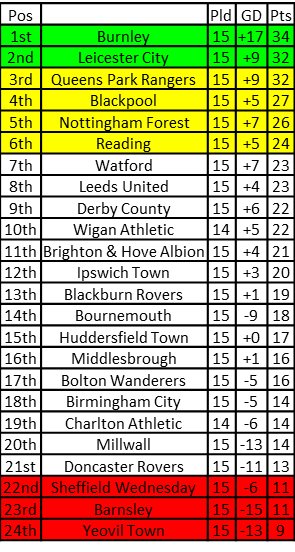