Much has been made of Adam Le Fondre's prowess as a sub but it was another scintillating substitute performance which put paid to Reading's FA Cup dreams. Nani came off the Manchester United bench to seal victory for the Red Devils, but the Royals come away with credit after another spirited performance.

Shattered dreams for another season... The FA Cup has been good to Royals fans in recent years as we've reached the Quarter Finals twice in the last three seasons. This year the journey stopped at the Fifth Round and at Old Trafford, a similar story to the 2006/07 season when Adam Federici's heroics earned us a replay at the Madejski. Though he performed similar feats this time around, the pressure and class told in the end but it was nowhere near the rout many predicted, especially after Sunday's one-sided ties.

And yet after five minutes it could have been game over. Danny Welbeck may have only scored twice this season but that last goal came against Real Madrid, and he was determined to prove to Sir Alex that he has a part to play. His shot after barely two minutes was blocked by Sean Morrison en route to goal. Man Utd were passing at will close to the Reading box and some neat interplay saw them come close again, as Welbeck and Javier Hernandez had shots blocked from 12 yards before Adam Federici could gather. After the early storm, Reading started to build some momentum of their own - the best chance came when Jobi McAnuff freed himself down the left wing and sent in a cross but nobody was arriving to convert. 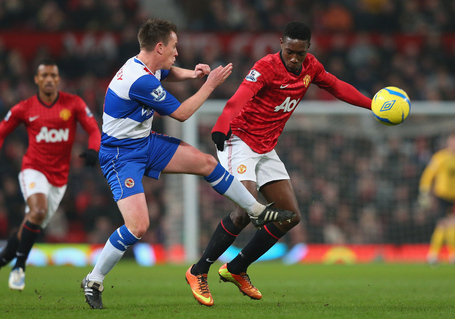 Noel Hunt was making a rare start for Reading and he was causing Nemanja Vidic no end of problems with his scurrying style. The pair went up for a header and clashed in the air, leaving Hunt with a wound that would require staples and two new shirts over the course of the first half. But Hunt won one duel with Vidic on the right flank, leaving the Serbian defender with no choice but to drag him to the floor. The deep free-kick was swung in by Nicky Shorey and Vidic got to the cross milliseconds before Sean Morrison, who would have powered into David De Gea's net.

Federici was in fine form in 2007's FA Cup visit and again he saved his best performance so far this season for the Theatre of Dreams. Tom Cleverley found himself with space 20 yards from goal and hit a piledriver which the Aussie palmed to his right. Ashley Young was quickest to the rebound and had only to tap in, until Federici sprawled to push the shot round the post when he looked beaten. A truly fantastic save, and a few people sensed it might be one of those nights where the magic of the cup comes alive. Nani was introduced to proceedings after a nasty-looking injury to Phil Jones and he instantly added spark and impetus. He struck a sweet-as-you-like volley which took one bounce on its way to shaking Federici's right-hand post, then cut inside and powered a left-footer from 20 yards which the Reading #1 was equal to. Half-time, 0-0 certainly wasn't in the script... 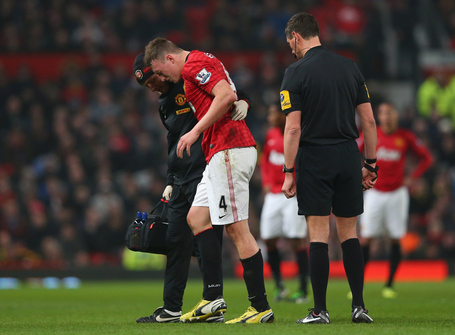 The second half started in a very similar vein to the first, with Man Utd trying desperately to assert their authority on the game. And it worked for ten minutes - Cleverley had another long range try saved, before Vidic popped up in the Reading box to head a corner towards goal, via Morrison - Shorey, this time, was able to clear the lines. But in true Royals style the counter-attack was looking dangerous. Le Fondre had been quiet but he only needs a sniff, and his one-two with Garath McCleary saw his own shot blocked in the box. United were piling on the pressure though, and the fans were calling out for Robin Van Persie... Sir Alex duly granted their wishes and introduce the talismanic striker.

It paid instant dividends as Reading sat even further back in an effort to put up the barricades. Anderson had a near-post shot turned around the post, then Nani tried a curler from 25 yards which was only a few feet wide. But he was just finding his range, and the lively winger was the obvious choice to finally open the scoring. Valencia had the choice of four United players to pick out with a pass as the red shirts streamed forward. He found Nani, who took one shot before drilling home. It took seventy minutes but eventually, the crimson tide overflowed the banks.

And 90 seconds later it was two, as Nani turned provider in a classic move. Hernandez had been quiet but his instincts in the box only require one lapse of concentration. He moved around the front of Morrison to power home a header past the desperately unlucky Federici. Game over? 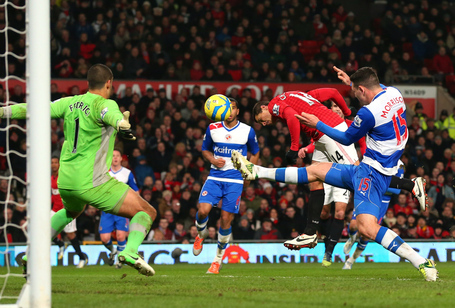 With the Royals, it's never over. Le Fondre tried twice with shots from range to score against his boyhood club but De Gea was equal to both efforts. It was captain McAnuff who got one back for Reading, as Stephen Kelly found him totally unmarked in the Red Devils' box to round the defender and fire home. Now it was the blue shirts who were streaming forward in an effort to grab a late goal, but United were looking even more dangerous on the counter. Welbeck was totally free inside the box but took a heavy touch and the chance was gone; then Hernandez cut inside to shoot but was denied by Federici - Nani could only follow up into the side netting. And as a testament to how close Reading were coming, United chose to keep the ball in the corner after multiple throw-ins and corner-kicks.

But the tactics wasted just enough time and the final whistle came just too quickly for another Royal revival. Another battling performance and one which will only add confidence to the side as they attempt to beat the drop. Both sides rotated their teams but ultimately, when you can call on the firepower of Nani and Van Persie, you know you're playing different ball games. It's a credit to Reading (and in particular Adam Federici) that they only lost by one goal, and kept the Red Devils out for over an hour before Nani's heartbreaking strike. We may be out of the Cup but by no means are we out of the battle for survival, and a performance like this can only go to strengthen the belief that we deserve to stay in this league.