McDermott - Manager Of Many Months

Brian McDermott has been confirmed the Premier League Manager Of The Month for January 2013. But whilst the Reading boss is in his first season in the top flight, he was no stranger to the award in the Championship.

Share All sharing options for: McDermott - Manager Of Many Months

First, let's have a look back at the month which saw Brian McDermott named Manager of the Month.

New Year's Day saw Reading go down 3-1 at White Hart Lane, but the next three games were remarkable, if only for the finishes. A late comeback saw the Royals go from 2-0 down to 3-2 up in little over ten minutes against West Brom. A trip to St James Park followed, and Reading recorded their first ever win in the north-east as an Adam Le Fondre double turned around an early Yohann Cabaye free-kick. And then another late show as Le Fondre pounced again in the dying minutes to secure a 2-2 at home to Chelsea. Alfie got his own recognition, of course...

It's also worth noting that our last game in December was a victory against West Ham and the first of February was another win, against the Black Cats of Sunderland - so whilst our form in January was pretty good in itself, the surrounding days certainly add credence to the award.

This isn't the first time a Reading manager has won Premier League Manager of the Month. The man they still call Sir Steve was awarded the accolade twice during our first season in the top flight. September saw his first photo-shoot with the Premier League cameras, as wins against Man City and Sheffield United were capped off by a draw at home to none other than Manchester United.

And Coppell got his second gong just two months later, as an early loss at Anfield was contrasted with three victories on the bounce against Tottenham, Charlton and Fulham. Coppell also won the LMA Manager Of The Year twice for his efforts with the Royals in the 2005-06 and 2006-07 seasons - arguably the best two seasons in the history of Reading Football Club. 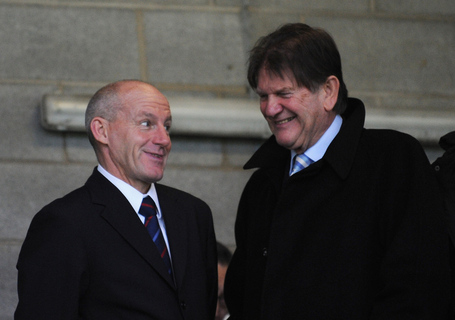 But back to McDermott... and since his Royals reign began in 2009, he's got 5 monthly awards - unsurprisingly, all in the second half of the season.

March 2010 was our only unbeaten month of the 2009-10 campaign - wins against Derby, Bristol City, QPR and Leicester, coupled with draws against Middlesbrough and West Brom, saw our late play-off charge just falter.

April 2011 was the year of the late play-off push, and the month started with 5 victories against Portsmouth, Preston, Nottm Forest, Scunthorpe and Leicester to complete an 8 game winning streak. Though the last three games were two draws and a shock home loss to Sheffield United, the work had been done and the playoffs were beckoning.

Then we come to last season, and Brian won the award in two consecutive months as February and March 2012 really put Reading amongst the promotion contenders. It was another 8 game winning streak which actually started in January, but games 2-5 in February against Coventry, Derby, Burnley and Middlesbrough got him his first gong, before the busy March schedule completed that with wins against Millwall, Portsmouth and Leicester. Three more wins came in March, against Barnsley, Blackpool and West Ham, leaving McDermott with a record of 6-1-1 for the month. Of course, that season ended rather well... 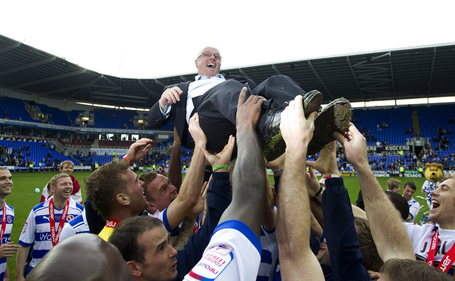 So those are Brian McDermott's five Manager of the Month awards - and in the top two divisions, only Chris Hughton has got more since Brian has been manager of the Royals. Even Sir Alex Ferguson has "only" mustered four since August 2009, a number which ties him with Carlo Ancelotti and David Moyes. And Hughton's six awards were split between Newcastle (4) and Birmingham (2), meaning Brian has won the most awards with the same club since he began managing Reading. And if we're going on to yet more analysis... McDermott is the first manager to win the award in the Championship then the Premier League in successive seasons, since Brendan Rodgers. And before that? Sir Steve himself. Sir John sure does know how to pick a manager...

Coppell's and McDermott's records both speak for themselves. Master and apprentice? Who was better? You decide (if you can!). But there's no doubting that this pair managers are two of the best we've ever had at Reading - and their recognition by the footballing authorities only goes to prove that.