Reading's first win of this Premier League season came against Everton at the Madejski Stadium in November, as Adam Le Fondre bagged two goals to turn around a half-time deficit. It was the same score at the break today, but the Toffees took their chances clinically and ensured a third loss on the bounce for the Royals and Brian McDermott.

Watching this game was an extremely similar experience to last week's capitulation against Wigan Athletic. For forty minutes Reading were holding their own and creating good chances of their own - and probably should have taken the lead. Jimmy Kebe broke through early and chose to go it alone, shooting just wide of Jan Mucha's right-hand post. From a deep free-kick, Noel Hunt nodded on to Kebe who found himself with just Mucha to beat. Instead, he took an extra touch, Mucha closed down the space, and Kebe had to take the ball back outside. Worryingly for Reading fans, the Malian winger kicked the ball out and lay prone on the floor - he was replaced by Hal Robson-Kanu after just fifteen minutes. The best chance of Reading's early pressure fell to Adam Le Fondre, who found the ball at his feet from a corner. He hit a sweet volley which came off the corner of post and bar before bouncing out to safety.

The Royals would regret missing those early chances as inevitably Everton started to show their class. Leighton Baines ran on the overlap and squared the ball intelligently for Steven Pienaar, whose shot into the corner was blocked by the head of Adrian Mariappa. Then Nikica Jelavic broke the offside trap and had only Stuart Taylor in the Reading goal to beat, but he shot straight at the Reading keeper, in the side because of Adam Federici's late training injury. Kevin Mirallas opened the scoring against Oldham in midweek and he was brimming with confidence, but his pop from 25 yards was confidently stopped by Taylor.

One man who is a constant danger, and game-changer, is Marouane Fellaini. He was fit to play today and it was his header from a Seamus Coleman cross which opened the scoring, powering past Taylor to finally break the deadlock. 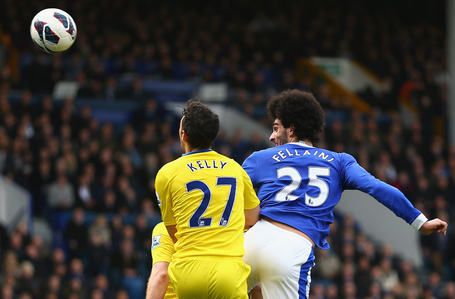 Fellaini was in the mood for another before half-time and his audacious volley from the touchline near the corner flag was tipped over by Taylor; it certainly looked to be heading in, evoking memories of that Papiss Cisse wondergoal for Newcastle against Chelsea. The sides went in at the break with the scoreline only 1-0, although that feeling that Reading had lost their early impetus was as nagging as a week prior at the Madejski.

And the second half started in much the same way as the first ended. Leon Osman charged at the Royals defence, flicked a neat ball over the top for Jelavic, who was crowded out just as he tried to pull the trigger. Fellaini couldn't follow up, and then Jelavic claimed a penalty when he backed into Stephen Kelly and went down from the minimal contact made. But Steven Pienaar soon made up for that early scare. He and Coleman were given the freedom of the right wing through much of the game and he made the Royals pay for a lapse in concentration, as he ran directly at Ian Harte, cut inside, and pinged a pearl of a 25-yarder past the outstretched hands of Stuart Taylor. 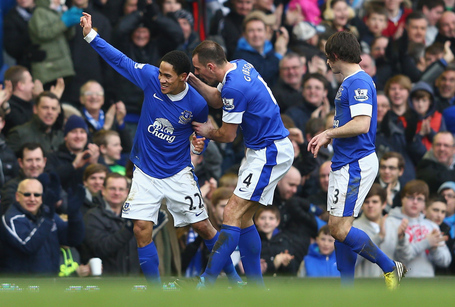 Hope Akpan had been relatively quiet but he had a chance to grab Reading an instant reply as the ball dropped to him from a corner, but his left-footed drive was wide of the post. And another corner was soon coming the Royals' way, although it really should have been more. Adam Le Fondre found himself with space on the left wing and drilled in a cross, which Sylvain Distin blocked with his arm as he slid to the ground. Much has been made in recent weeks of accidental contact but Distin's arms were needlessly in the air and they most definitely denied Reading a good chance to score. Still, those decisions seem to go against Reading more than they go for us, and so it was no great surprise to see the referee dismiss those appeals. 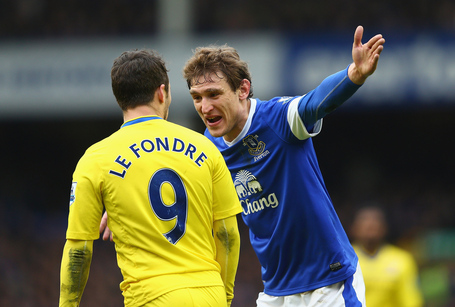 The game was put to bed by the two best players on the pitch as Pienaar freed Mirallas in acres of space - he duly fired past the unlucky Taylor for a comfortable 3-0 scoreline. By the end Everton were stroking the ball around for fun and a beautiful move involving Baines and Pienaar saw Mirallas have another try from 25 yards but Taylor was in position to palm around the post. And to avoid the ignominy of a worse result than Oldham managed, the Royals found enough fight to at least score a consolation, as Ian Harte crossed for Robson-Kanu to drill home a header past the stranded Mucha. 3-1 it finished, and although it was a better performance than against Wigan last weekend, it was still a damning show of the different levels of class between Reading and some of their opposition this season.

As I said, this performance was very similar to that against Wigan. We showed signs of life at the start but once the other team starts to play the ball around they get into a comfort zone and we simply can't get anything going. Another key aspect was how much time players had to move between the lines and run at the defence - just like the 2nd and 3rd against Wigan, the 2nd and 3rd for Everton today were simply giving players too much room to run and they duly punished us.

It could have been so different had Adam Le Fondre's luck not all been used up in January. He could have opened the scoring with his volley and his cross was a stonewall penalty after rebounding off Sylvain Distin's arm. But saying these decisions cost us the game is simply wrong. Everton deserved their win. But we equally can't forget that the Toffees are arguably in the 2nd "league within a league", whilst we're firmly in the bottom one. You look at the teamsheet and nearly all of their players would walk into our lineup - it's those difference makers that did their jobs today. Whilst it was by no means an unlucky loss, there were glimpses that Reading learnt from their mistakes last week. But with each passing game, the margins for error grow ever slimmer.