The Finances Behind Reading's Championship Season

ACA qualified accountant Mozzle takes a detailed look at the Football's Club's accounts for the 2011/12 season and sees some very worrying numbers.

Share All sharing options for: The Finances Behind Reading's Championship Season

Whilst the sacking of Brian McDermott stole all the headlines last week, other news quietly coming out of the Club was the filing of the 2011/12 financial statements for Reading Football Club Limited ("the Club") with Companies House. In my first, and possibly my last, article for The Tilehurst End I’ve been looking at what can be read into the figures.

For the record, I’m an I’m an ACA qualified accountant working at one of the ‘Big 4’ accountancy firms. There are undoubtedly others out there who are better placed to comment on the results, but I’ve written this to hopefully give those without a financial background an understanding of the issues. It has been written based on publically available information from Companies House and I don’t have any unique insider knowledge.

Didn’t the financial statements come out in December?

Well, yes and no. The financial statements for Reading Football Club Holdings Limited came out in December. This holding company used to be the sole owner of the Club, but since the purchase by TSI now only holds 49% of the shares. Therefore its financial statements only include the full results for the Club for the 10.5 months prior to the sale and only 49% share of the loss for the remaining 1.5 months. They also include the full results of the hotel and the ‘profit’ from the sale of the 51% share in the Club to TSI. The ‘profit’ is a slight misnomer, as all the company has done is give away part of its debt-filled subsidiary for nothing.

So the holding company financial statements are quite messy to understand and don’t really reflect the underlying financial status of the Club, hence I’ve looked at the latest filings with Companies House.

So what are the headlines?

Erm, not good. Take most key metrics normally used to look at how a business is performing financially and the results are heading the wrong way. Best you sit down.

Despite winning the league last year and average home league attendances increasing 9% from 17,681 to 19,219, turnover of £14.8m is down 14% (£2.5m) on the previous year when we finished 5th. I suspect this is due to failing in the FA Cup in the 3rd round to Stevenage (compared to beating West Brom, Stevenage and Everton before losing to Man City in 2010/11) and the lack of extra money-spinning play-off games.

As every fan knows the biggest cost of any football club is player wages and Reading is no different. Whilst the figures from the financial statements include the cost of all 367 staff employed by the club, it is fairly safe to assume that the majority of the wages go to the players. The total wage bill for the season was up 45% (forty five percent) to £26.6m. Staff costs represent 180% of turnover! Granted a part of these wage bills will be bonuses only paid out because we achieved promotion and the Championship title, but those will be nothing like 80% of the total, and you don’t need to be a financial whizz to know that is not sustainable.

All this led to an operating loss of £21.8m, over double that from the year before. Since our relegation from the Premier League in 2009, the club has managed to sustain operating losses by selling players for about £6m a time (Kitson, Doyle, Gylfi). Last year was no different with the sales of Long (£6.5m reported) and Mills (undisclosed) generating a £8m profit and reducing the loss. As part of the sale to TSI, Sir John Madejski waived £2.3m of interest owed to him on his loans to the club (which were below market rate anyway).

This results in a loss before tax of £11.7m, up from £5.0m the year before, not a pretty picture of the Club finances.

How about a comparison with another club?

I’ve spent a few months laughing at one of my QPR supporting colleagues for their overspending and our prudent approach. The above results made me think again and I decided to have a look at QPR’s financial statements for comparison with Reading. Given they were last year’s Championship winners, they might provide a useful guide for Reading.

QPR’s turnover for their promotion season was £16.2m, marginally better than Reading’s. Their wage bill was £29.7m (183% of turnover), marginally more than ours. And their operating loss of £25.7m was marginally worse.

But that’s not very different at all. Certainly not the difference between a "prudent, well –run" club and one with "cavalier owners willing to throw money into their little plaything". Maybe I’ll keep quiet to my colleague.

But surely we’ll recoup all those losses in the current season in the Premier League?

Last time we won the league and got promotion, we had turnover of £12.3m and staff costs were (only) £12.5m, so we made a relatively modest operating loss of £7.0m. This was recouped over the two seasons in the Premier league as the increase in turnover more than offset the increase in wages. But compared to 2005/06 wages are already up 113%, before we’d even got promotion. Inevitably there will be another step increase as promotion clauses come into play. The good news is there will be an increase in turnover due to the increased TV revenue and a full stadium, but I’m not sure whether we’ll break even.

Taking QPR again, on promotion their turnover leapt to £64.0m but then so did their wage bill as it rose to £58.5m (only 91% of turnover). They have a marginally reduced operating loss of £23.6m. If we follow similar lines, we’ll still be making a huge loss in the current season.

Ah but QPR spent loads in the Premier league, we’ve not done the same

True. QPR spent £25m on transfers (including signing on fees, agents etc) in their first season in the Premier League and the new players probably significantly increased the wage bill. We only spent £5.3m in the period up to 29 January (when the financial statements were signed), but that doesn’t mean our wage bill won’t increase as players like the Pog are understood to be on very high wages. So whilst the initial outlay acquiring players might have been smaller we’ll still be paying Premier League-level wages to the new signings. They wouldn’t be here, otherwise!

The significant losses in 2011/12 might explain why Brian didn’t get more money to sign quality players. Maybe the club was always just going to use this season’s return to the Premier League to recover previous losses. Our relevantly modest outlay would then mean an almost inevitable return to the Championship would not be so catastrophic for the club.

Erm... what about parachute payments?

The following graph shows how Turnover, Staff costs, Operating Profit and Profit before tax have varied over the past 8 years. The jump in turnover and wages for the years in the Premier league are fairly clear. These are followed by a couple of years of parachute payments back in the Championship and the trimming of the wage bill. Big differences between the operating profit (or loss) and PBT are due to player sales. 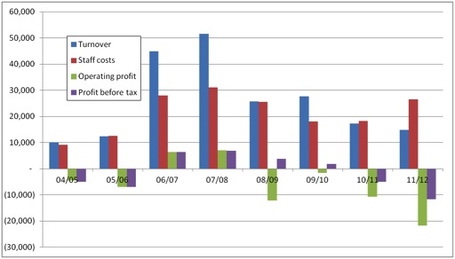 If we do get relegated, we’ll receive parachute payments for the next four seasons, £16m for two years and £8m for two years. Fortunately this is more than the £6.5m for two years last time. Those payments were not enough to compensate the club for the big fall in TV revenue and the marginal fall in wages, and a big operating loss was recognised in 2008/09. This was offset by the sales of Kitson, Shorey, Sonko and Doyle. Whether we have enough quality in our current squad to makes similar sales is another question.

That’s all a bit worrying, is there anything else you can tell us?

As a rather techy accountant, I couldn’t help noticing that the financial statements aren’t prepared consistently with UK Accounting Standards. They are taking an exemption from preparing a cash flow statement (FRS 1 para 5(a) for those that are interested), which is not available to them. Whilst some readers of the accounts won’t be too bothered, it is a fairly basic error and does raise a question of the ability / competence of the Club’s financial management.

As has hopefully come through above, the biggest concern must be the large increase in player wages. If we hadn’t gone on such an amazing run in the second half of the season and missed out on promotion, the Club would be in a very poor financial state. Sir John’s mantra of strict budget controls and running the Club as a business appear to have gone missing. Gone are the days of steady prudent investment, welcome to the heavy reliance funds from the owners. Let’s hope Anton has deep pockets – as well as long arms to reach to the bottom of them.

The one redeeming feature of the financial results is that we got promoted to the Premier League. If we stay there for a number of years we’ll be alright... oh bugger.