Reading 0-0 Liverpool - Return Of The Mac

The last time we saw Alex McCarthy in the Reading goal, he suffered a shoulder injury diving to save Djibril Cissé's last minute effort for QPR at Loftus Road. What a welcome return it was, after he pulled off some truly stunning saves to ensure the Royals stopped their run of losses at home to Brendan Rodgers' Liverpool.

Share All sharing options for: Reading 0-0 Liverpool - Return Of The Mac

There was an impeccably observed minute's silence before kickoff to remember those who lost their lives in the Hillsborough tragedy 24 years ago. There was no doubt that Liverpool would be fired up for this game - however, their fans seemed to take that a little too literally as throughout the first half there was a constant stream of fireworks emanating from the away end. Whilst the flare at kick-off added a little continental atmosphere, the loud bangs and relentless chants about Maggie Thatcher threatened to take away from the spectacle on the pitch. Once they'd had their fun with the chants though, it soon settled down.

Luis Suarez and his fellow Reds forwards weren't at all fazed by the fractious atmosphere, however, and they were determined to get back on track after last week's 0-0 draw against West Ham. Ironically there was nothing McCarthy could do about the first real chance Liverpool had, as Suarez ran onto a pass which had the Reading defence static, and chipped over the Royals' keeper. As the away end started to cheer for a goal, Chris Gunter arrived in the nick of time to head off the line. No Hawkeye needed for that one.

Nigel Adkins' style of play has become quickly ingrained in the Reading way, although it was clear that the system will take some time for the players to become fully confident within it. Goal kicks were being taken short to the centre-backs - one such goal-kick was played from Morrison to Gunter, who searched out... Sturridge in the middle of the park. The England striker released Suarez who shot straight at McCarthy. Gerrard could only volley the rebound at Mariappa, covering on the line. Philippe Coutinho had a great curler from 25 yards which was tipped around the post by McCarthy, and then Sturridge had a chance from little more than 5 yards from a corner but again the England U21s keeper stood firm. 0-0 at the break - and... applause all round the ground at half time?! 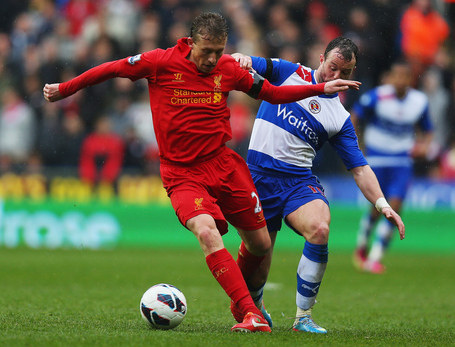 Just three minutes into the second half it looked as though all of Reading's hard work defending would be undone. Henderson crossed for Coutinho who flicked deftly into the bottom corner - but he was clearly offside, much to the chagrin of the again-celebrating Liverpool faithful. Whilst the first half was all Liverpool, the Royals suddenly had renewed belief - and the more open game in the second half produced some fine chances for the home side too. Noel Hunt released Pavel Pogrebnyak out wide - his square ball was met by Hunt but Pepe Reina, untroubled in the first half, scrambled across to make the block.

The introduction of Daniel Carrico for Jem Karacan seemed to help the cause as the Portuguese man was calm in possession and happy to pick the right pass. One such pass found Garath McCleary wide on the right wing - he provided the low cross to the top of the box which found Jobi McAnuff. The Reading captain span and shot left-footed, and Reina had to be alert again to tip over the deflected shot.

But the real hero of the day was the Reading keeper, Alex McCarthy. He pulled off three truly world class saves in the second half to deny Gerrard and then Suarez. The Liverpool captain tried a trademark curler from the edge of the box - McCarthy dived to his left and tipped over when it looked impossible to reach. Then Sturridge sprung the offside trap and laid off to Suarez - the Uruguayan's powerful volley was not only stopped but held by McCarthy. Then Suarez ran at the Reading box and fired in a piledriver - McCarthy dived full stretch to his right to palm away his rasping shot. All sides of the ground stood in appreciation of the Academy product who had no doubt salvaged a point for Nigel Adkins' side.

There was just enough time for McAnuff to appeal for a penalty although his claims did seem a little optimistic. A battling draw, but there's no doubt who the hero of the day was. 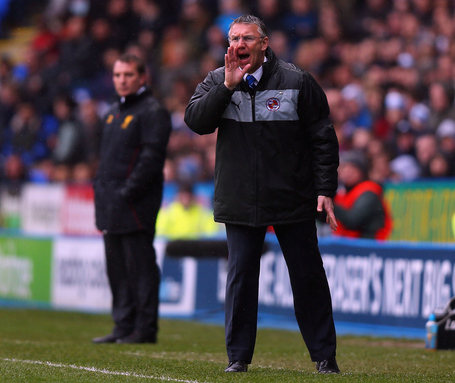 Whilst the first half was a little frightful for Reading fans, as the defence were visibly uncomfortable with Adkins' efforts to play out from the back, it was actually the sort of performance which encouraged the Royals' faithful. There's no doubting that it'll take time and possibly some new personnel, but it was encouraging to see the players trying to play their way out of trouble rather than going for the hoof as soon as they were closed down. It's about believing you belong in the division - we may only have five games left in the Premier League this season but finally it looked as though we believed we had the right to be here.

More on individual performances in the player ratings post, but I must single out Alex McCarthy. He's said it's the best game he's ever played, and my word, what a game he had. Ten saves (only Jussi Jaasklainen of West Ham has made more in one game this season), but that doesn't tell the whole story. In particular, his save from Gerrard was different class, a thunderbolt heading towards the top corner before the outstretched arm got enough on the ball to divert it around the post. Two more fantastic saves from Suarez late on salvaged a point - it might be too little too late but it was encouraging for next season, and that's all we can hope for now.