Well, at least the false hope is gone. Reading lost at Carrow Road on Saturday which all but certainly sends them down to the Championship with QPR. A good performance from the Royals, but two Bennetts in two minutes were the difference on the day.

On a rare sunny day of football it was Norwich who made the better start. Elliot Bennett marauded forward for the Canaries early on and tried his luck twice from 20 yards - both efforts sailed wide of the post. Pogrebnyak seemed to be struggling after a knee in the backside from a Norwich defender but was able to carry on after some treatment. The Royals were really struggling to control possession in the first twenty minutes and it was all Norwich - Robert Snodgrass freed himself down the right wing and his cross found its way to Garrido on the corner of the box, whose volley was straight at McCarthy.

After that spell of pressure from the yellow shirts, the blue and white hoops started to find their feet in East Anglia. Garath McCleary, out on the left wing, cut inside and drilled a shot over Mark Bunn's crossbar. Jobi McAnuff, employed more centrally than usual, played the ball into Pogrebnyak's feet in the box - he showed a neat touch to turn Bassong but was crowded out before firing in on goal. It was now Reading's turn to dominate proceedings and the Royals were showing some good interplay. Nick Blackman on the right wing played a defence-splitting pass which found left-back Kelly, whose cross was cleared for a corner. McCleary played a neat one-two with Pogrebnyak which again led to a corner. And from another corner McCleary drove across the goalmouth - Pog could only fire over from three yards. It was good to watch, but the fact that nothing had resulted from that pressure was a worry.

That worry was confirmed in a mad first seven minutes of the second half. Kei Kamara broke from midfield and shot from the corner of the box, but McCarthy was equal to it. From that corner, grant Holt powered a header which the Reading keeper parried, but only into the path of Ryan Bennett who sidefooted home. And just two minutes later Reading were seeing double. Not only as the Canaries scored another but the fact that the other Bennett grabbed it. Another cross came in and McCarthy could only punch as far as Bennett, whose shot was only deflected by the Reading stopper into his own net. It could have been three or four as the pressure kept coming - first a shot by Kamara from a Garrido cross was deflected wide, then Snodgrass' piledriver was palmed around the post by the Royals stopper. 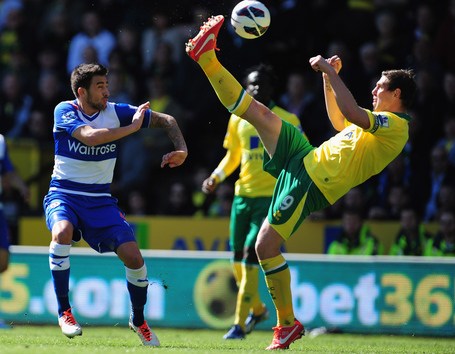 Reading started to come back into the game, desperate to level matters. Chris Gunter swung a couple of crosses in which had to be dealt with by the Norwich defence, then something out of nothing. McCleary picked the ball up on the half-way line and ran, and ran, and ran at the Norwich backline. He pulled the trigger from 25 yards and his wicked swerving left-footer deceived Mark Bunn who could only palm it into the corner of the net. Not over yet... It was now Reading who were pushing to grab a goal, with Norwich content to sit back and absorb the pressure. Robert Snodgrass' injury took away from some late impetus from the Royals which won a corner. It was cleared but the second cross found McCleary, whose spectacular overhead kick was only narrowly wide. Gunter swung over a cross which was met tamely by Kelly as Reading pushed everything forward. Norwich moved the ball to the corners in an attempt to kill the five minutes of injury time, and the big bundle of Grant Holt fell to the ground acrobatically to win some late free kicks. The final whistle blew, and it looked as though that was finally that for Reading's brief Premier League stay.

This was a real killer result - just like the "sucker punch" which Southampton scored a couple of games ago, you felt that speed with which Norwich scored their double took the wind out of the Reading sails. The first half was encouraging after the first twenty minutes or so, which the Canaries dominated. The latter 25 was almost entirely Reading, with neat interplay and confidence on display at Carrow Road. But the fact was that whilst there were neat touches and possession, the Royals hadn't really troubled Mark Bunn in the Norwich goal (he even probably should have saved McCleary's shot in the second half). Compare that to the Canaries, who forced McCarthy into a good number of saves. They may have been mostly straight at him, but as they say, if you don't buy a ticket... 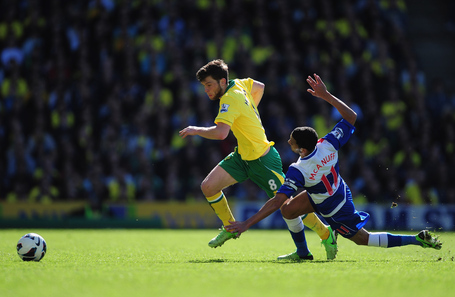 Positive signs then, and aside from five minutes of madness Reading could probably have nicked a result from this one. For ten minutes Norwich were first to every corner and that was a real worry - both goals came from crosses and corners, and Bassong, Holt and Bennett all headed over in a short period of time. In attack, Pogrebnyak looked more willing than usual despite being the lone frontman. Blackman was more miss than hit, even managing to overstep the line when attempting a throw-in. McCleary was the real standout performer - his pace was a constant trouble, he scored one and could have equalised with a stunning overhead kick.

Nigel Adkins made no substitutions which came as a real surprise. Adam Le Fondre is the Royals' top scorer and might have found himself a chance in a packed Canaries box in the final few minutes; Daniel Carrico impressed for half an hour against Liverpool and his presence and calmness could have helped maintain the pressure; even Noel Hunt's aerial ability might have helped as the long ball onslaught came late on. Still, Adkins is no doubt a manager who knows his plan and the abilities his players have but in the current time of experimentation, it surely would have paid to at least try out some other options. But when the final whistle blew, Reading came up short, a tale which has been much repeated this season.