A look back at what went wrong for Reading during the 2012/13 Premier League season, starting with injuries. Every team has to deal with players missing games, but the Royals had to cope without some of their best for large chunks of the season.

Share All sharing options for: Reading 2012/13 - What Went Wrong: Injuries

The first thing to say is that every team suffers from injuries. But Reading's squad was ruthlessly exposed when a few key men succumbed to the treatment table, showing just how important those integral cogs can be in the system. Let's have a look at those key injuries throughout the season, and how they affected the team.

The new England call-up didn't actually start the season in goal, as Adam Federici rightfully retained the jersey after his season as part of the best defence in the Championship last year. But after a shaky start, the Aussie keeper was deposed by the Reading Academy product. McCarthy fared somewhat better in the Reading net, though he didn't keep a clean sheet before injuring his shoulder just seven games into his spell in the Royals net, in the last minute of the League game against QPR. 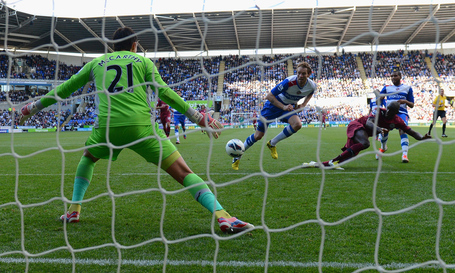 McCarthy missed over five months, as Federici came back in for the 0-0 draw against Norwich before Alex finally returned for another 0-0, the home tie with Liverpool. And what a return it was, making save after save to rightfully earn him the man of the match plaudits. It speaks volumes that England manager Roy Hodgson has decided to have a look at McCarthy just one month into his return to the first-team - we can only speculate what would have happened had he been fit for those intervening five months. 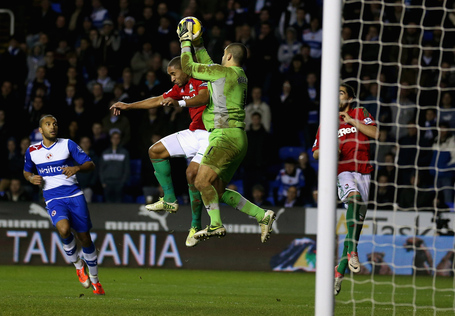 Perhaps not quite as key an injury as McCarthy's, but Federici did miss the whole of March which included a key home rubber against Aston Villa. With McCarthy out too, it was down to Stuart Taylor to step in and whilst he wasn't terrible, he also didn't particularly cover himself in glory. The three other games were all away, at Everton, Arsenal and Manchester United. Not games you'd expect to get anything from, but still it was a big miss to have just the number three keeper guarding the net.

He does what he wants... And whether he wanted to or not, he was on the treatment table for most of the season. The Malian winger is certainly the most exciting player in the entire Reading squad when on his game, and for him to start just sixteen games in the League was a massive blow to the Royals' survival chances. Injured when the season started, he made his first appearance in the Cup match at QPR before disappearing with injury again just five games later, at home to Fulham in late October. He scored on his comeback in the 5-2 defeat to Arsenal in mid-December, lasting until the start of March and the away game at Goodison Park where he was subbed off after just eighteen minutes. And he's been absent ever since.

Despite making only eighteen League appearances, Kebe scored five goals, including a brace against Sunderland which were to be Brian McDermott's last points in charge of the Royals. When you consider he scored as many goals as Pavel Pogrebnyak with just two-thirds of the time on the pitch as the Russian, it tells you how important he could have been to Reading's survival chances had he stayed fit. 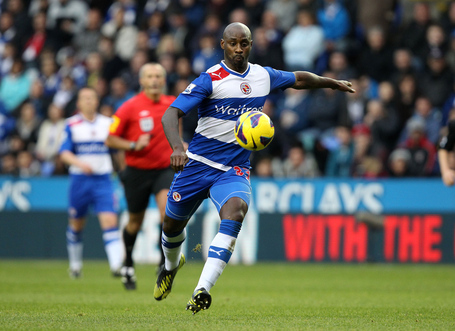 Remember January 2012? The arrival of Jason Roberts was undoubtedly the catalyst for promotion as his arrival coincided with the amazing winning streak which ultimately sealed the title. That thumping header against Southampton will live long in the memory of many a Reading fan. But this season? Just eight League starts, with a further three off the bench. The conspiracy theorists will doubt his injury; the critics will say he didn't score during that time on the pitch; the cynics will point out that he still managed to forge a decent media career in his time off the pitch.

But Roberts was key to the way Reading played, especially under Brian McDermott. Undoubtedly the best striker at holding up the ball ahead of Pogrebnyak, Hunt and Le Fondre, his strength was a key part of alleviating pressure on the defence and setting up attacks for the Royals. He wasn't seen in a Reading squad until the last game of September, where he appeared off the bench at home to Newcastle; he didn't make his first start until the 3-3 draw at the Mad Stad against Fulham at the end of October. But from then, he started every game - until the 1-0 defeat away to Southampton in mid-December, at which point he wasn't seen again. Rumours abound about his future at the club, but if he was that effective last time we were in the Championship, who knows how he could have helped the cause this season. 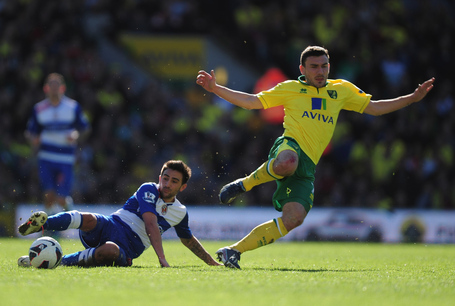 The Reading Academy product started twenty-one games in the Premier League this season but his injury at the end of 2012, coupled with the off-the-pitch stories with Danny Guthrie, meant that Jay Tabb and Mikele Leigertwood were the duo in the middle for eleven games from late October through to late December. Whilst the Royals did win that first League game against Everton in his absence, the period he missed culminated in seven losses on the spin. An underrated cog in the Reading midfield, he's just starting to show his quality under Nigel Adkins. A change of tactics is certainly helping this, but there's no doubting the dynamism he brought to the midfield even under McDermott. 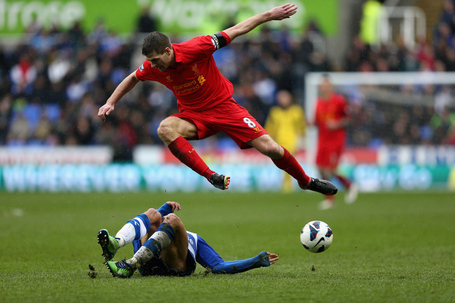 Arrived in January from Sporting Lisbon, and has made just one start in the League (he was subbed off at half time), and two more appearances off the bench. But in those rare starts, he's shown quality, calmness on the ball and an ability to tackle and distribute effectively. Perhaps he could have been the midfield enforcer McDermott wanted to use alongside Karacan or Guthrie - every Royals fan is hoping that Carrico will come good in the Championship next season.

Which player was the biggest miss for us this season? Let us know your thoughts in the comments section below.