Although squad selections under Nigel Adkins have indicated who will likely leave anyway, the Reading Manager hasn’t hung about in waving off some of the stalwarts from recent seasons. The day after our last home match to Man’ City, Ian Harte’s agent confirmed the left back as the first player officially moving on from the Madejski.

Share All sharing options for: The Adkins Diet Starts By Losing Harte.

When Ian Harte arrived on August’s transfer deadline-day 2010, even the man himself said the move "came from nowhere." But it was perhaps the most intuitive signing of Brian McDermott’s reign. Since Nicky Shorey’s 2008 departure RFC had tried a string of left backs in; Chris Armstrong, Dan Harding, Ryan Bertrand and Marcus Williams. But none were able to make the position their own beyond a full season.

Given how badly Williams’ faired in his opening games there was no surprise another left back arrived, but few envisaged a player of Harte’s age moving from Carlisle United doing any better.

Harte dispelled those fears with his debut. As well as converting a penalty, the Irishman’s impact helped the Royals attain their first clean-sheet in an impressive 3-0 win against Palace. With fans downhearted about the sale of Gylfi Sigurdsson, they soon forgot, as Harte stepped in to become the squad’s runner-up top scorer that season.

It was Harte and fellow pro Andy Griffin’s defensive experience that enabled the Royals to solidify at the back and better the previous 2009/10 campaign for Brian McDermott’s hard to break, slick counter attackers. With the addition of Mikele Leigertwood shoring up the middle in absence of Gylfi, Shane Long matured further, becoming a more than potent striker against his Championship contemporaries.

Admittedly there was a shameless element in the side obtaining set pieces. But it was here where Harte showcased his mastery that would help culminate towards Reading making the Play-offs and the final at Wembley. Ten years since the last, against Walsall at the Millennium Stadium.

But the final removed the shine on Harte’s terrific first season at the club. Swansea’s pace left him at times pedestrian, resulting in a telling 3-0 deficit by half-time and another hurtful Play-off denial. Some therefore questioned if the Premier League was now beyond the former international? 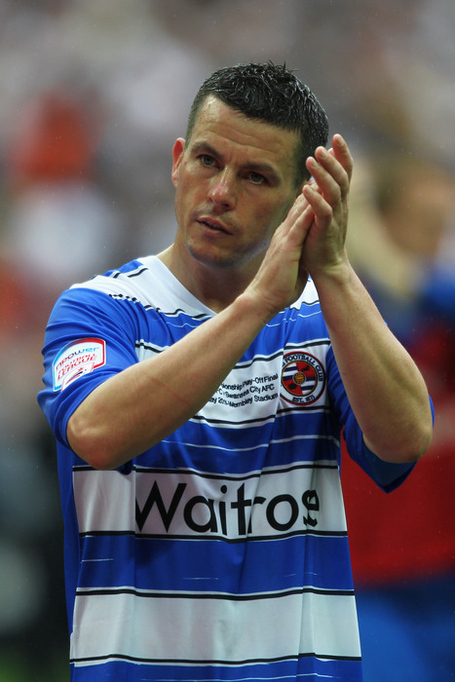 The 2011/12 season started with the Royals languishing lowly in the table through what seemed a Wembley hangover. Perhaps feeling vindicated to do so following the Play-offs, McDermott opted to bring through Joseph Mills in place of the former Leeds legend. But his reinstatement into McDermott’s starting line-up at Ipswich mid-November would see the Royals begin to look like a team capable of promotion again. The team would go on to win six from seven and jump from mid-table to Play-offs.

It has to be argued that Harte really did help turn Reading’s season around. It surely isn’t a coincidence both results and the Royals league standing improved following his return to the side. This was all even before January when TSI took over the club with the gift of Jason Roberts.

Although many opposition sides tried to replicate Swansea’s exposure in Harte’s pace, it seldom worked. The man, who had taken Leeds to European Cup semi-finals and Ireland a World Cup, was far too astute and efficiently shut down most offensives. Again his prowess towards goal proved vital, scoring in some of Reading’s pivotal games in March and April before securing promotion. Poignantly at Brighton, heightening the gravity of Reading’s next game at Nigel Adkins’ Southampton just three days later.

Thus many thought "Harty" deserved another crack in the Premier League for his contribution. Despite Nicky Shorey making an unanticipated return and Mills awarded a longer contract, Harte decided to stay. Given the positional congestion and varying career stages, the situation was perhaps ill-conceived in hindsight. Harte even rebuffed Neil Warnock’s invitation to make an emotional return to Leeds.

As it did with most in the RFC squad this season, good form and fortune sadly evaded Harte too. Early games appeared reminiscent of the 2011 Play-off final and unsurprisingly Shorey somewhat usurped him in the starting line-up. Brian McDermott would go through phases in using either of the left backs with no conclusive winner. But once Stephen Kelly and then new manager Adkins arrived, both eventually found themselves in the cold for the remaining games.

It seems an unfitting end to a Reading career where Harte would twice make the PFA’s Championship team of the year. But sadly the Royals’ season hasn’t reaped itself with much glory to end on anyhow. With Harte issuing his farewell so early, it perhaps isn’t too presumptuous assuming he may have a few suitors lined up. Given that Leeds tried a year ago and now have Brian McDermott at the helm, this might not be the last time we hear chants of "Ian Harte Harte Harte!"