In the second of these (somewhat depressing) installments looking at the Royals' failures to stay up this season, we move off the pitch and look at the backstage rumblings which derailed the dressing room and no doubt contributed not only to the demise of the team, but also Brian McDermott's reign as manager.

Share All sharing options for: Reading 2012/13 - What Went Wrong: Off The Field

Reading has always prided itself on being the club where no player is bigger than the team, and everyone comes together for the cause. But many an incident this year came to light, whether the club wanted it to or not, which hinted that the harmony had been broken. Here's a round-up of the most high-profile backstage developments which affected the club this season.

Guthrie was signed by Brian McDermott in the off-season on a free transfer from Newcastle United, with a reputation as a passing midfielder who liked to spread the play. He started the season in the side, appearing in the first four League games which yielded just one point, a 1-1 draw against Stoke on the opening day. But then his former employers came to town, and Guthrie was only on the bench. Still, he found a platform to vent his opinions on the matter - Twitter.

"Great point today and performance from the boys – for those asking I’m bitterly disappointed not to play. "I’m trying to fit into the direct style of play the manager wants and I pass to (sic) much at the minute which is my best asset. "I understand what the manger (sic) wants, but stopping habits like going and getting the ball of (sic) the back four is difficult. "I will adapt to what is asked of me....The most important thing is the team!!!!"

Understandably, Brian McDermott wasn't happy about this development, and spoke to Guthrie about making such comments in the public domain. He started at another of his former clubs, Liverpool, two games later - but after finding out he would be on the bench for the visit of Fulham in the next match, he told McDermott exactly what he thought of the decision. The response from the Reading manager was to ban Guthrie from both the Fulham game and the training ground for the foreseeable future.

As noted in the injuries article I wrote a few days ago, this came at the same time that Jem Karacan was out with injury, leaving Jay Tabb and Mikele Leigertwood as the only central midfielders in the squad. Not an ideal situation to be in in the Championship, let alone the top flight. Fans were taking both sides - either agreeing that McDermott's tactics were wrong and couldn't find success in the Premier League; or saying that if Guthrie was on the reported £20k a week, he should do whatever his manager tells him.

Guthrie found his way back into the squad for the visit of Manchester United at the start of December, but again only on the bench. Two games later, and another twist - Guthrie refused to travel to Sunderland to take on the Black Cats, claiming his head wasn't in the right place. McDermott was understandably disappointed, and the midfielder was fined two weeks' wages for his misdemeanor.

The hatchets were finally buried on Boxing Day, as Guthrie started and helped Reading to a 0-0 draw at home against Swansea. He admitted that he was expecting a bad reception, but was glad that the Royals fans weren't too harsh in their criticism of his antics. The saga was over - however, his constant arguments with McDermott did not aid the team's cause on the pitch, and cannot have helped morale either. 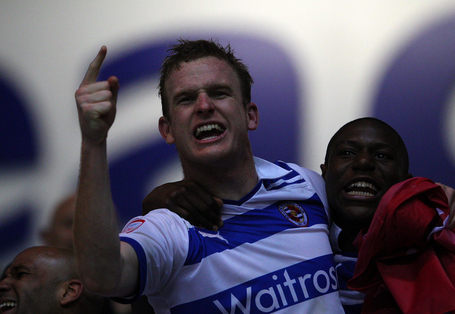 This is actually a situation reminiscent of our first ever season in the Premier League. Steve Sidwell had been an integral part of the Reading midfield since joining in the 2002/03 season, and he was part of the "106 Team" which so destroyed everything in its wake in the 2005/06 Championship winning campaign. But he had one year left on his contract, everybody knew it, and most suspected that he was going to move on a free transfer at the end of the season.

But instead of the fans booing him, and instead of him refusing to play or simply fading into the background, Sidwell carried on in the same all-action matter that had persuaded Chelsea to take a punt on him at the end of his contract. He made 35 appearances that season for Reading in the Premier League, and was just as effective on his step up.

Fast forward from 2006 to 2012, and a similar situation with Alex Pearce. Homegrown in the Royals' Academy, he actually made his Reading debut in 2007, at home to Burnley in the FA Cup. But come this season, it was he who was out of contract at the end of the campaign. There's no doubting that Pearce is Reading through and through, and would give his all for the club for every minute he's on the pitch.

But Reading's Player of the Season last year has been marginalised this campaign, making just 18 League appearances as the trio of Gorkss, Mariappa and Morrison have all been tried ahead of him. Though Gorkss was loaned to Wolves late in the season, the latter duo have been the number one pairing for the end of McDermott's reign and what has transpired of Adkins.

The reason behind this? Almost certainly to persuade Pearce to sign a new deal, in the hope that scouts would not want to sign a player who is unproven at this level. Whether we would have stayed up with Pearce a regular in the side is impossible to know. But to go from POTS to forgotten man all because of a contract dispute is a sad demise for what could have been a Reading captain and legend. 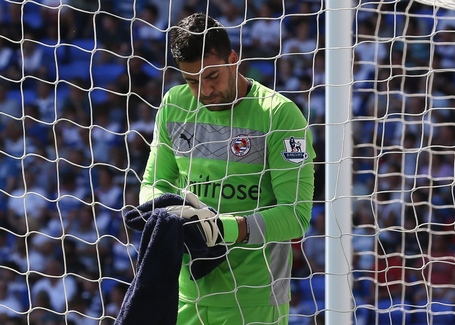 Another part of the highly successful Royals defence last season, Federici found himself in deep water at the start of the season. A dodgy goal conceded at home to Stoke was followed by two more mistakes at Stamford Bridge against Chelsea, and the fans were calling for Alex McCarthy to replace the Aussie keeper.

When McCarthy did step in, one person in particular was particularly aghast - Micaela Gardner, Federici's girlfriend.

'Football has left me feeling totally numb and empty inside! For once I have NO explanation! #noloyalty #absolutejoke. Unbelievable!!! You need thick skin for success!!'

Again, McDermott was keen to play down the effect this had on the team behind the scenes. But in such a high-profile, high-pressure environment, there are always going to be frustrated voices...

Kebe Blames Who He Wants 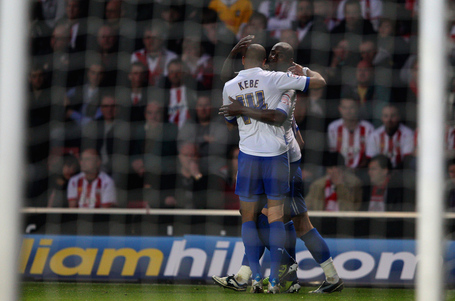 I might just leave this explanation to Kebe himself. As spoken by the mercurial winger in December 2012.

'For me we should have bought some decent players during the transfer window. Don't get me wrong, I like my team-mates and we are working hard for each other and we brought some good players – but there is a big difference between being in the Championship and the Premier League.

'Someone bought the club last season. We won the Championship – so surely we need to add decent players. We have some good players, but it wasn't enough and we knew it. We're behind the manager and we are trying our best. There is no miracle in football.'

Aside from a few of those lines (I don't think many of us can call the Reading players team-mates), you would have to agree with most of those comments. And this was coming from a player - undermining his team-mates, his manager and his chairman in the national media. For someone to make this sort of a comment on a messageboard - understandable. For a player to say this to the press - a damning indictment of the quagmire Reading found themselves in this season.

A few media mishaps, a few mishandled situations, a few decisions which may have ultimately cost us our Premier League status. Which cost us the most? Are there any we missed? Let us know below.