Yep, you read that right. Reading have won a game. It may have taken over three months, and six games of the Adkins era to pick up that win, but there was no luck involved in a classy performance in the sunshine against Fulham at Craven Cottage.

Share All sharing options for: Fulham 2-4 Reading: Royals Thrive With Pressure Off

And it could have been advantage Cottagers after 90 seconds. Damien Duff found space on the right hand side, and found Ruiz with a peach of a cross - his sliding volley was met well by McCarthy. But Reading soon found their feet and a devilish cross from garath McCleary had to be headed behind with Pogrebnyak lurking. The Royals were looking dangerous on the break, with Danny Guthrie releasing Chris Gunter for a cross which was blocked on the right wing. Hal Robson-Kanu had seen a lot of the ball, and he created the opener - and scored it. A bobbling ball dropped in the penalty area, and HRK got to it before John Arne Riise, who scythed him down just inside the lines. The Welsh winger picked himself up and sent Schwarzer the wrong way from the spot. Advantage Royals!

And they weren't in any mood for stopping. Jobi McAnuff drove at the Fulham defence and picked out Garath McCleary on the left wing - his driven shot was always heading wide but the intention not to lie down was becoming very clear. Some nice interplay found Guthrie 25 yards out and he fired in with the laces but like McCleary's effort, it didn't trouble Schwarzer. Pogrebnyak had an effort from 8 yards but he slipped as he shot and the ball rolled tamely into the keeper's arms. Fulham's best chance came from the 27th minute sub, Hugo Rodallega - a cross from Berbatov was headed down to him by Bryan Ruiz, but Alex McCarthy spread himself and stopped the volley from the striker. 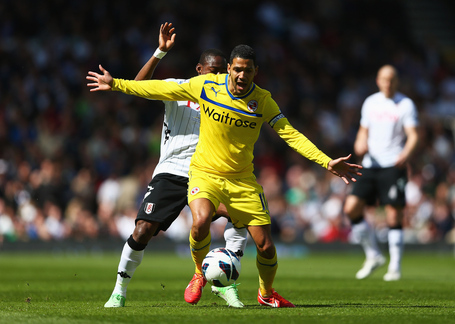 The game was being played at a hectic tempo as Fulham chased that equaliser before half time. But they were limited to long shots from Ruiz and Rodallega which McCarthy was equal to. Guthrie could have had another penalty as he was awkwardly bundled over but his theatrics perhaps convinced the referee to refrain from pointing to the spot again. The boos rang out at half-time as Reading went into the break in the lead in the PL for the first time since West Ham on the 29th of December 2012.

And it was so nearly two straight after the break. McAnuff played in Karacan whose flick was just turned round the post by Schwarzer. Fulham broke upfield from the resulting corner and Rodallega's powerful volley was stopped by McCarthy. Another corner went the way of the Royals and Morrison's header back found Karacan again, whose curled volley was stopped by the Fulham keeper. Then McCleary piled a shot straight into Schwarzer's arms. All this in the first five minutes! 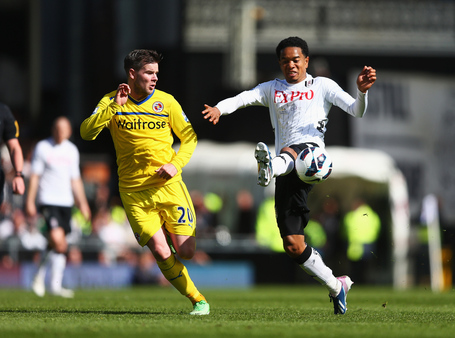 Pavel Pogrebnyak was returning to Craven Cottage and he had a great chance to double the lead. Schwarzer came out to fetch a deflected Robson-Kanu shot but Pog nipped in first and tried to flick towards goal - but two men tracked him back and one cleared off the line. Berbatov had his own penalty shout as he drove into the box and collided with Stephen Kelly but the ref gave nothing. Reading broke upfield through McCleary and his shot was diverted into the path of Hal Robson-Kanu on the right side of the box. One touch, and bang, curled into the left of the net. Some breathing space...

Fulham piled forward hoping for a quick goal back. Emanuelson curled one from 25 yards which McCarthy punched clear, then Berbatov curled over from an acute angle. As the Royals fans reveled in the London sun, their Fulham counterparts' frustration was ever-growing as "2-0 to the Championship" rang out around Craven Cottage. And soon enough, it was game-on again. Ruiz played a one-two with Rodallega, got past Kelly, and slid the ball through the unlucky McCarthy's legs. 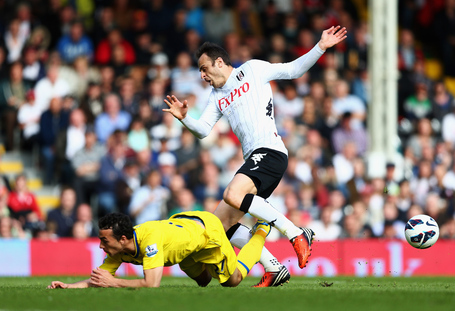 The end-to-end pace continued as Le Fondre, on for Pogrebnyak, slid through McCleary who continued his wayward marksmanship with another shot heading high and wide. But soon enough, Le Fondre showed his eye for goal. A long ball sent forward, and ALF took one touch before taking it round Schwarzer and lashing home. Remarkably similar to his goal at St Mary's last season. 3-1, game over? Nope. Duff crossed, Ruiz rose, and the striker planted a header past the stranded McCarthy.

Fulham smelt blood and Berbatov crossed for Rodallega who absolutely thumped a half-volley against the crossbar. And in this topsy-turvy game, it was finally put to bed with 7 minutes left. A cross found Le Fondre, he headed back to Karacan whose drilled left-footed volley planted itself in the corner of the net. Fulham tried to grab another to make it interesting, and McCarthy had to be alert to a Rodallega shot which somehow didn't cross the line. But job done... finally. Reading had grabbed an all-important - wait - morale-boosting victory, and the first of the Nigel Adkins era. 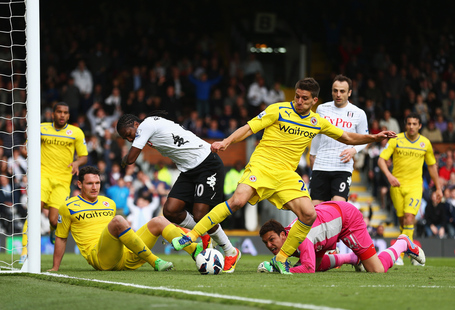 This was perhaps the best performance all season from the Royals, as both goals Fulham scored came very much from nothing, and arguably against the run of play. Reading dominated the possession and were brave in their decision-making, not afraid to play the flair pass rather than the percentage call. Hal Robson-Kanu deserves the plaudits for his wingplay - never afraid to take his man on and two composed finishes for his brace. On the other wing McCleary may have been wasteful with his shooting but his bravery and speed always troubled the defenders.

Composure was another key part of the performance. The Royals always seemed to have an option or way out of a tricky situation, and they seemingly always knew where a teammate would be waiting. Passing the ball out of trouble, rather than hoofing it forward, is one of the main differences between the "McDermott way" and the "Adkins way", and though in some cases it's square pegs for round holes, the players seem to be responding to the system. Jem Karacan in particular was outstanding today - and his goal was no less than he deserved.

It might be too little too late, and equally it may be the lack of pressure which enabled Reading to play so freely, but this was just rewards for Reading fans who have endured a tough season. And most importantly it gives hope for next year as the Adkins era moves into the Championship.