The third in this series inspecting why the Royals survived just one season in the Premier League - and this time the focus is on transfers. Eleven new players featured for Reading in the 2012/13 season, but did any of them make a big impact?

Share All sharing options for: Reading 2012/13 - What Went Wrong: Transfers

When Reading achieved promotion to the Premier League, most fans agreed that the squad would require significant spending to remain competitive in the top flight of English football. The windfall of achieving promotion, coupled with the even larger bonuses from television money coming in season 2013/14, meant that more than ever it was imperative to ensure survival.

Yet whilst the Royals added eleven new faces (that made Premier League appearances) over the season, there wasn't the "big-name", "big-money" or even "big-performance" player which lifted the fans and inspired hope in the rest of the team. It's always been said that the "Reading way" is to invest in young, hungry players with something to prove, but simply put, that strategy is for a team looking to establish themselves in a division - not survive relegation. However, Reading had learnt in the past that those big transfers can often go awry. 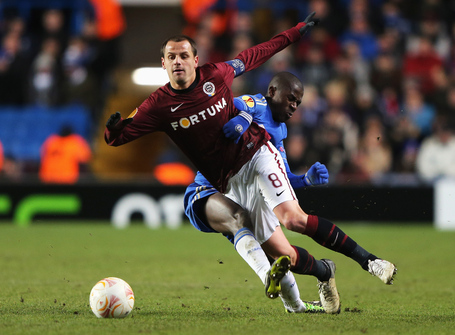 I'm your biggest fan, I'll follow you until you love me, Marek Matejovsky... Just one of the signings from the last Premier League campaign that didn't work out (Ian Walton, Getty Images)

Two players came in for fees in the summer, with five more arriving on free transfers. Sure, it's not the price, it's the quality of the player - but nearly all of these were good Championship players, not established top flight performers. January saw four players arrive commanding a transfer fee, but only Stephen Kelly came in with Premier League experience.

In terms of net transfer outlay, the Royals actually came mid-table, despite spending just £9m on players. All the data in the table below is from transfermarkt.co.uk, and it should be noted that the figures cover the whole season - that is, both the summer AND the January transfer windows.

It must be noted that the table arranged like this throws up a few surprises. Fulham and Swansea both turned a significant profit with their transfer dealings this season, but then if you look at their sales colums it's easy to see why. Fulham saw Moussa Dembele and Clint Dempsey leave for Tottenham Hotspur for a combined fee of around £23.3m, whilst Swansea's main income in the transfer market came from Joe Allen (Liverpool, £16.7m) and Scott Sinclair (Man City, £6.9m). In Swansea's case, it allowed them to spend almost double what the Royals laid out for players, whilst the Cottagers spent about the same as Reading over the course of the season.

It's the same for the two North London clubs, Tottenham Hotspur and Arsenal. Both are below the Royals in the net spending table but then they both received over £50m for players in the 2012/13 season - and re-invested that amount in their squads. Spurs saw Luka Modric leave for Real Madrid for around £26.4m, whilst the Gunners lost Alex Song to Barcelona for £16.7m and Robin Van Persie to Man Utd for £27m. 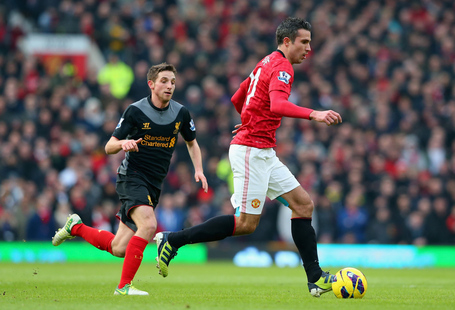 How about the two clubs we came up with, West Ham and Southampton? The Hammers' net outlay was double that of the Royals', and they also received £4.4m in transfer fees for sales. The Saints didn't receive any money for player sales, yet still spent over four times that of Reading, shelling out for Gaston Ramirez and Jay Rodriguez amongst others. That sort of investment was a great help for those two to stay in the division - despite the fact that they arguably had stronger squads than Reading before the transfer merry-go-round.

Reading spent the 4th least in the division and it showed over the course of the season. Wigan spent the 3rd least and came down with the Royals, whilst the utter shambles at Queens Park Rangers, spending enough for a Europa League spot, saw them rock bottom of the table. 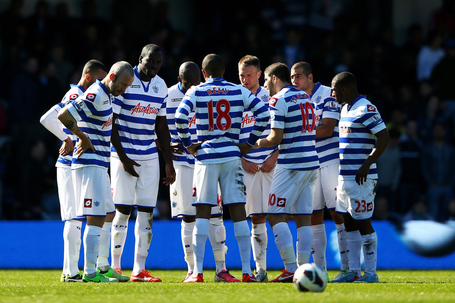 The simple fact of the matter is that those who were around the relegation zone with the Royals spent far more money on players and so - albeit only just - had the requisite resources to survive. The two other promoted teams spent double and four-times what Reading spent in order to invest in their security, whilst the likes of Sunderland, Aston Villa and Stoke spent around double that of the Royals. (Fulham and West Brom, two "established" Premier League sides, did well considering their outlay over the season.)

Money can't guarantee success, then, but it certainly helps...

Of course, you should always spend wisely (which may have been the downfall of QPR). So as long as our new players performed, then we should have had no problem staying up. So here's a quick rundown of all our players, report card style...

Nicky Shorey, free - 16+1 appearances - Whilst it wasn't a disastrous second Reading stint for Shorey, the fact that he was usurped by Stephen Kelly and Ian Harte by the end of the season signalled that the one-year experiment likely won't be going any further. 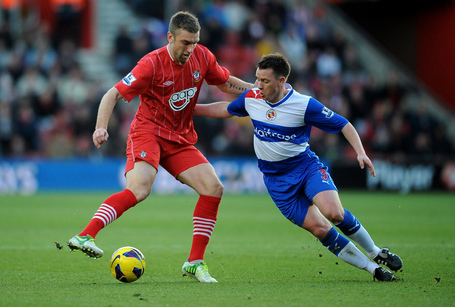 Danny Guthrie, free - 19+2 appearances, 1 goal - As noted in my "Off The Field" piece, Guthrie probably made just as much impact off the pitch as he did on it, as he pretty much derailed any semblance of team spirit for three months near the start of the season. Performed well on occasion, and seems to fit better in Nigel Adkins' system, but this is hardly a signing which set the team alight.

Pavel Pogrebnyak, free - 26+3 appearances, 5 goals - The striker who started the most games all season returned just five goals - one less than he managed in twelve games for Fulham last campaign. No transfer fee for the Pog but no doubt a significant wage outlay which may carry over (albeit reduced) to next season. But when your main striker nets just five times all season, there are serious problems.

Chris Gunter, £2.6m - 20 appearances - The Wales international was on a five-game rotation with Shaun Cummings at the start of the season, presumably as Brian McDermott tried to figure out which one he preferred. The answer came in January, when he decided he preferred Stephen Kelly. He's looked more comfortable in recent weeks but again, this wasn't a player who held down a regular spot in the team.

Adrian Mariappa, £3.3m - 29 appearances - The closest Reading had to a new signing who cemented a spot in the side, Mapps looked comfortable for the most part, and didn't miss a League game from the end of November. I was quite surprised he wasn't in the reckoning for Player Of The Season, to be honest, as a consistent performer and mainstay of the side Probably the best of our summer signings. 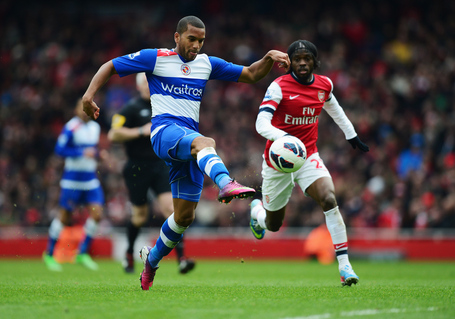 Garath McCleary, free - 15+16 appearances - Another arrival from Nottingham Forest, McCleary looked very good in the time he played for the Royals this season. But even with the injury of Jimmy Kebe and the "McAnuff in the middle" experiment, he couldn't hold down a starting berth.

Stuart Taylor, free - 4 appearances - Well, he was probably signed as a back-up, to be honest. With both Adam Federici and Alex McCarthy ahead of him there wasn't much chance for Taylor to show his skills, although when he did get a few games he hardly covered himself in glory.

Hope Akpan, £300k - 6+3 appearances - Whilst this is no doubt a signing for the future, this didn't strike as a typical January panic buy. Well, except for the fact that we'd just played against his former side Crawley Town in the FA Cup. He's certainly a good prospect as he showed some good attributes in his time on the pitch, and all Reading fans are hopeful he'll show he can dominate the Championship next season.

Nick Blackman, £1.2m - 3+8 appearances - Whilst this is no doubt a signing for the future, this didn't strike as a typical January panic buy. Well, except for the fact that we'd just played against his former side Sheffield United in the FA Cup. No doubt a season in the Championship will do him good, but this wasn't a signing that was going to change the season.

Stephen Kelly, £1.3m - 16 appearances - Possibly the signing of the season, as Kelly started every single game after he arrived. Shame it came in January... Starting at right-back and usurping summer signing Gunter, he moved over to the left under Adkins, replacing another summer signing in Nicky Shorey. Which tells you something about the success of those two in themselves. 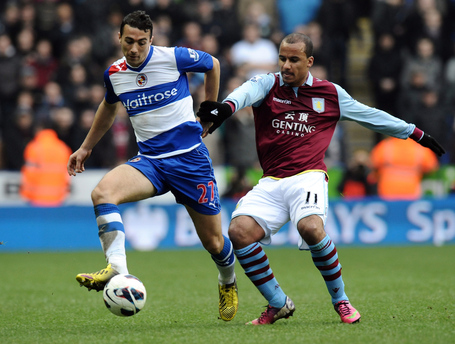 Daniel Carrico, £700k - 1+2 appearances - The former Sporting midfielder lasted less than ninety minutes this season for Reading - not in one game, but over the course of five months. Yet another signing that might turn out to be shrewd next season but certainly didn't help the Premier League cause.

When you look at those summer signings and see that none started 30 games in the top flight for us this season, it lends to the argument that these players weren't of sufficient quality to keep Reading up. Mariappa made 29 appearances, the most for any new arrival (and actually the third most of any Reading player, behind Mikele Leigertwood and Jobi McAnuff). Aside from Pavel Pogrebnyak, the rest struggled to start half of our Premier League matches.

Compare this to Southampton's signings - Nathaniel Clyne and Maya Yoshida both started at least 30 games, with Jay Rodriguez, Gaston Ramirez and Steven Davis all starting at least 20. The Saints may have spent four times what the Royals did, but their signings had an impact week-in week-out, and ultimately kept them up.

However, it's not all doom and gloom...

As I noted (and Jimmy Kebe noted in December...), these are all very good Championship players. Hope Akpan and Nick Blackman are still in their early 20s and have plenty of time to develop. Stephen Kelly made the right-back position his own before moving to the left - and Chris Gunter, just 23, is still promising and more than good enough for a promotion chase. Mariappa, at 26, has his best years ahead of him as a centre-back. And Guthrie and Pogrebnyak, should they stay, should perform comfortably in the Championship.

But there-in lies the problem. These players may be Premier League quality in time. They weren't good enough in 2012/13.