At 5pm on Saturday, the familiar kneejerk swings of opinion will start as the first match in this season's Championship will be complete. Are we going to walk the League with 107 points? Or is the Nigel Adkins era over just 90 minutes into the new campaign? It'll all be decided against Ipswich Town at the Mad Stad on Saturday afternoon - here's the tale of the tape.

A marked difference in the pre-seasons for either side, as Ipswich have remained unbeaten whilst the Royals have lost their last three matches against British opposition. Whilst you can never read too much into Reading's failure to win in the last couple of weeks, it's not a set of results which fills you with confidence. Losing to a lesser side has far more of an effect than beating a lesser side - whether that takes its toll on Saturday remains to be seen.

Whilst neither side is a perennial fast starter, it is quite worrying to see that Reading haven't won an opening game since that unforgettable victory at home to Middlesbrough in 2006 - even though our last four have all been at the Mad Stad. Couple that with Ipswich's last two away games on the opening day and you'll see why the omens aren't looking good so far...

If the above paragraph didn't fill you with confidence, how about this? The last four meetings between the side have all gone the way of Reading. We last met in the 2011/12 season, and the away fixture saw perhaps the epitome of Reading's customary late show, as goals from Hunt and Pearce (both in injury time) reversed a 2-1 loss into a 3-2 victory. At home, Pearce netted again to seal a 1-0 victory. 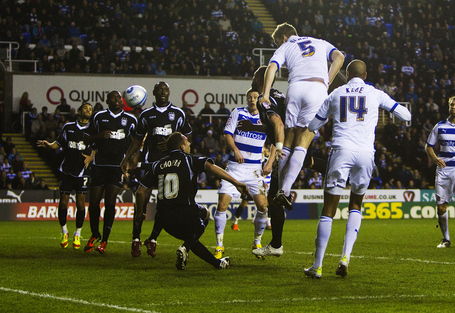 In fact, since the turn of the century, we've only lost one of the eight matches against the Tractorboys at the Mad Stad. Three have ended in stalemate, and four have gone the way of the Royals. A better omen, perhaps...

As ever with the first game of the season, it's relatively tough to know the exact team that lines up under the Skybet Championship banner at 2.55pm. Pre-season has given us a few clues as to exactly who might line up where, though.

Alex McCarthy should be a lock in goal, as his call-up to the England squad at the end of last season was just reward for his exceptional performances in the Premier League last campaign. Morrison and Mariappa have been the first-choice pairing for a while now, both in pre-season and at the back end of last year, whilst Wayne Bridge is the only recognized natural left-back at the club following the departures of messrs Shorey, Harte and Mills. At right-back, the competition is on between Chris Gunter and Stephen Kelly - the Welshman might just beat out the Irishman because of his athleticism.

In the midfield, it's likely that Danny Guthrie and Jem Karacan will start as the "back" two, with Danny Williams having to wait for his chance due to a slight knock which kept him out of the final two friendlies. Hope Akpan has impressed this pre-season, but the biggest dilemma for Nigel Adkins might be Garath McCleary, who has been perhaps the best player in the run-up to kick-off, culminating in a stunning goal against Bristol Rovers.

Four from McCleary, Robson-Kanu, McAnuff and Drenthe should fill the three "forward" midfield positions - I think McCleary might have to wait for his chance just now. It's also extremely likely that those three chosen will alternate positions in the game to create overloads on either side and, of course, to support the striker. 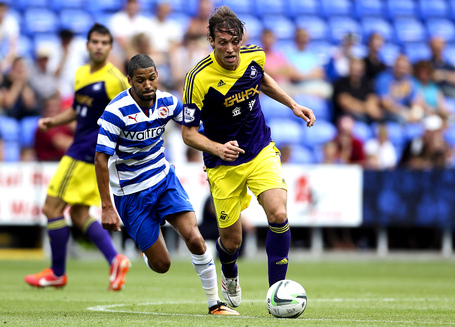 But which striker? I imagine the fanbase is split on Adam Le Fondre and Pavel Pogrebnyak - and so am I. Pog no doubt has the physique most suited to a lone role in the Championship, but is the Russian really up for a long old slog against some unglamourous sides on muddy pitches on a Tuesday night in December? He could tear up the Championship, but Le Fondre has already shown he scores goals at this level. It's a coin flip, but I'll side with the "tried and tested" - Pog for 70, and the super-sub to do what he does best.

It's just as hard to pick the Ipswich side, not only because I don't support them but also they've added ten new signings this summer. One of those is Jay Tabb, and not one boo will be heard within the stadium if his name is read out. Their other signings include Christophe Berra from Wolves, Daryl Murphy from Celtic, David McGoldrick from Nottingham Forest and a trio from Bristol City. Not massive name signings, but if they help the team, nobody will be complaining.

Mr David Coote is the man tasked with blowing the whistle on Saturday afternoon. He's risen through the ranks over the last few years and while he's yet to referee a Premier League match, I'm sure he'll see a visit to the Mad Stad and relegated Reading as just as good. Coote has actually reffed us once before, in a 2-0 win against Coventry in 2012. The Tractorboys had the pleasure of his company twice last term, with one win and one loss under his stewardship.

As ever with the opening day, it's bound to throw up some results which look downright stupid later in the season. Whilst this won't be a shocker if Ipswich win (as I think they'll finish top ten), I certainly wouldn't have Reading at marginally odds-on, as the combination of a new(ish) manager, new players, new(ish) system and the inevitable hangover of relegation will all have an effect. I'm going for a 1-1 draw, but a pleasing performance - and one which might just stave those aforementioned wild opinions off one more week...